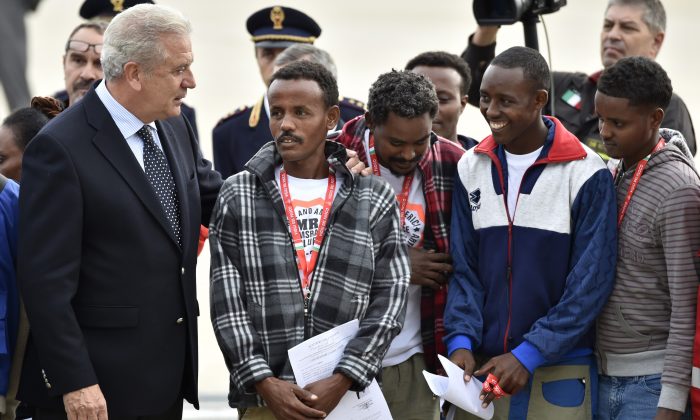 EU Commissioner Dimitris Avramopoulos (L) pose with a group of Eritrean refugees before the take off of their plane to Sweden on October 9, 2015 at the Ciampino airport of Rome. (Andreas Solaro/AFP/Getty Images)
Europe

ROME—Italy bid farewell Friday to 19 Eritreans — the first of an estimated 160,000 refugees to be resettled throughout Europe as part of a new EU redistribution program to move asylum-seekers out of hard-hit front-line countries.

Bundled up in flannel shirts and jackets to prepare for their new lives in Sweden, the Eritreans smiled and waved as they climbed up the stairs to the Italian police plane that took off from Rome and landed in Lulea, just south of the Arctic Circle, seven hours later. Swedish officials now must register the refugees and begin processing their asylum requests.

Sweden’s immigration agency said the 14 men and five women, who ranged from 25 to 40 years old, were selected because they have a chance of being granted asylum and have family or other connections to Sweden.

A significant number of the people making dangerous journeys across the Mediterranean Sea are from Eritrea, an authoritarian country in northeast Africa.

Italian Interior Minister Angelino Alfano said over 100 more refugees from Italian centers would be resettled in Germany, the Netherlands and elsewhere in the coming weeks and that overall, 40,000 asylum-seekers would be moved out of Italy over the next two years.

Italy for years has demanded that other European nations shoulder more of the burden of the refugee crisis. Though most migrants prefer to pass through Italy en route to destinations further north, Alfano was keen to show off the first flight to quiet anti-immigrant critics at home.

EU migration commissioner Dimitris Avramopoulos and Luxembourg’s foreign minister joined Alfano at the airport. Later in the day, they travelled to the tiny southern Italian island of Lampedusa, where the first “hotspot” to identify would-be asylum-seekers opened a few weeks ago.

The hotspots are being set up in Italy and Greece, where most of the tens of thousands of people seeking new lives in Europe first land after often-dangerous boat trips from Libya and Turkey. Hotspots aim to establish whether people are fleeing conflict or violence and have the right to some form of protection.

Once selected for resettlement, the asylum-seekers will go where they are told to go, not necessarily where they want, Avramopoulos said.

“We must be very clear. They must obey,” he said.

Lulea, the main city in Swedish Lapland, couldn’t be more different from the Eritreans’ desert-covered homeland. Temperatures on Friday were 3 degrees C (37 F) but will dip to below freezing at night. Outside the city, reindeer, moose and bears roam in the wilderness.

Sweden is estimated to have at least 20,000 Eritreans, according to Swedish media.