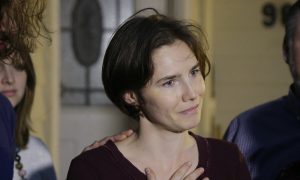 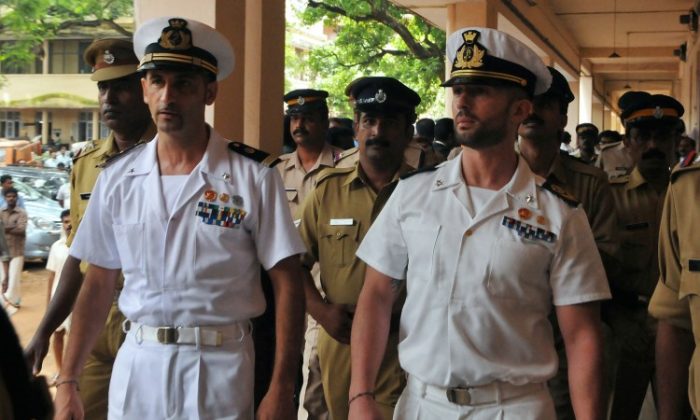 Italian marines Latore Massimiliano (2L) and Salvatore Girone (2R) are escorted by Indian police outside a court in Kerala, India on May 25, 2012. (STRDEL/AFP/GettyImages)
Europe

MILAN—An international arbitration court opened two weeks of hearings July 8 on Italy’s request to have India end the criminal prosecution of two Italian marines accused of killing two Indian fishermen in 2012, an incident that led to a break in the countries’ relations.

The Italian representative to the Netherlands-based court, Ambassador Francesco Azzarello, alleged that India had shown prejudice in the case by disregarding the presumption of innocence principle and argued that Italy should have legal jurisdiction because the case involves active-duty servicemen.

Azzarello also alleged there have been “inexcusable delays” in the proceedings involving the Italian marines, Massimiliano Latorre, and Salvatore Girone, saying that by the time the arbitration is completed the two “will have been subject to various degrees of deprivation of liberty without any lawful charges for over eight years.”

The Indian fisherman were shot and killed in international waters off India that were known for pirate activity.

Italy claims the marines fired warning shots into the water to deter a small boat that was on a collision course with an oil tanker they were assigned to protect. Azzarello said the skiff was “seconds from a collision.”

India disputes that the Italian shots were fired in warning and emphasized that the fishing boat was legally operating in India’s economic zone about 20.5 nautical miles from the Indian coast.

“It is difficult to believe that these volleys were simply meant as warning shots as alleged by Italy,” said G. Balasubramanian, New Delhi’s representative to the Permanent Court of Arbitration. “They hit two crew members, caused damage to the boat, endangering its safe navigation, and also endangering the lives of the other nine crew members.”

He also said that launching the investigation and court proceedings in India was “legally speaking, entirely natural.”

The Italian ambassador argued otherwise July 8. Azzarello said Italy’s “prompt assertions” of jurisdiction “were swept aside by reference to India’s domestic law, which purported to give the Indian authorities penal jurisdiction beyond its territory.”

“Italy is confident that India, away from the political spotlight of this case, would be the first to defend the principle that members of its armed forces are immune from the criminal jurisdiction of a foreign state,” he said.

He said the interests of the victims’ families would be taken into consideration in any Italian investigation.

The case escalated diplomatic tensions between India and Italy, but Azzarello said relations normalized after the arbitration court intervened in 2016 and the Italian marines were allowed to remain in Italy while case was being decided in the Netherlands.

Latorre had returned to Italy by then after suffering a stroke while in custody in India, while Girone was living at the New Delhi residence of the Italian ambassador to India following his release from custody.