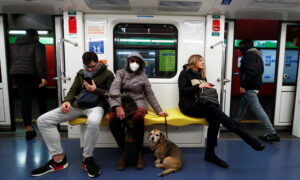 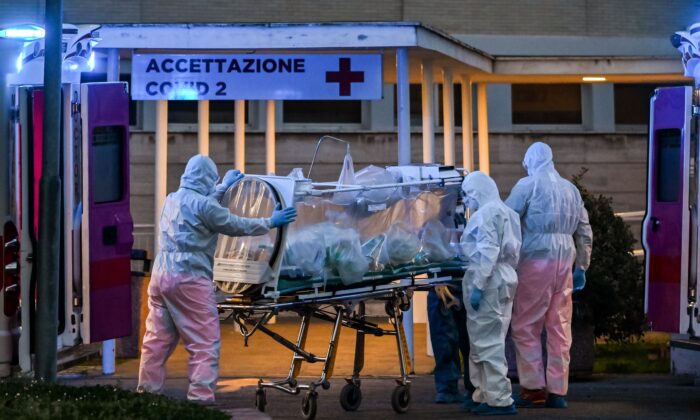 Medical workers in overalls stretch a patient under intensive care into the newly built Columbus Covid 2 temporary hospital to fight the new coronavirus infection, at the Gemelli hospital in Rome on March 16, 2020. (Andreas Solaro/AFP via Getty Images)
AMERICA

Italian health authorities said that nearly 500 people have died from the new coronavirus in 24 hours as the country struggles to contain the outbreak.

The country’s Civil Protection chief, Angelo Borrelli, said that 475 people died from the CCP virus in a single day, raising the death toll to 2,978 as of Thursday. The 24-hour death toll a day before was 345, according to ANSA.

The Epoch Times refers to the COVID-19 virus as the CCP virus because the Chinese Communist Party’s coverup and mismanagement allowed the virus to spread throughout China and create a global pandemic.

“There are 1,084 more healed today, a truly important number, which brings [the figure] to 4025, 37 percent more than yesterday,” said Borrelli during a Wednesday press conference cited by ANSA.

About 2,629 health workers, or 8.3 percent of the total, have become infected with the CCP virus, authorities told ANSA. And so far, more than 35,713 cases have been reported across Italy, officials said.

Italy has been essentially on full lockdown for about two weeks as officials attempt to curb the spread of the disease, which first emerged in Wuhan, China, late last year before spreading to more than 150 countries worldwide. Italy is currently the worst-affected country in Europe and the hardest hit outside of China.

“It is necessary to limit travel as much as possible,” Borrelli said, adding that “correct behavior must be adopted.”

“Citizens must know that this is not about changing their lifestyle just for one or two weeks,” the Italian national center for epidemiology chief, Stefania Salmaso, was quoted by Sky News as saying.

The Italian national health authority said in a study released Wednesday that about 99 percent of those who died from COVID-19 had previous medical problems, reported Bloomberg News.

The average age of those who died is around 79.5 years old, and about 17 people under the age of 50 have died from the disease. All of the victims under the age of 40 had serious preexisting medical problems, the report said.

Elsewhere in Europe, French authorities have recorded an uptick in cases to 7,730 along with 175 deaths, reported the BBC. Spain has reported 13,000 cases and 598 deaths.

Germany, meanwhile, has 8,198 cases and 14 deaths while the United Kingdom has reported nearly 2,000 cases and at least 60 deaths.

This week, the European Union announced that travelers from outside the union would be turned away from border crossing points and airports for 30 days.