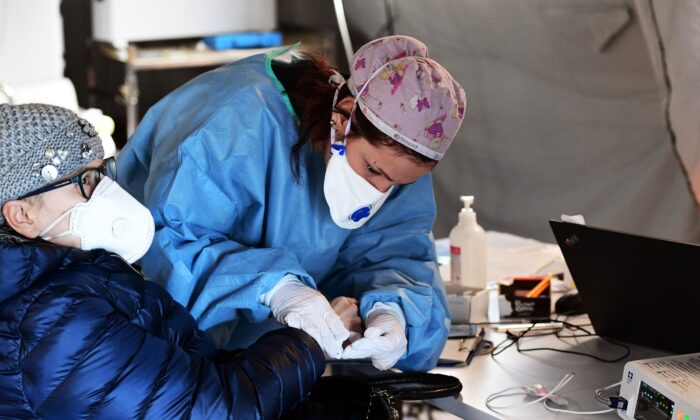 A elderly woman receives assistance in the a pre-triage medical tent in front of the Cremona hospital in Cremona, northern Italy, on March 4, 2020. (Miguel Medina/AFP via Getty Images)
WORLD

Deaths from the CCP virus epidemic in Italy rose to 464 on Thursday against 437 deaths on Wednesday, according to the country’s Civil Protection Agency.

However, the number of new infections declined to 2,646 from 3,370, officials said, reported Reuters. So far, more than 25,000 people have died from COVID-19 since the outbreak began in February in Italy, The Local reported.

Meanwhile, current infections fell for the fourth day in a row by 851 in the past 24 hours, officials said on Thursday.

Around 190,000 people have been infected with the CCP (Chinese Communist Party) virus, a type of novel coronavirus that emerged from mainland China last year.

The latest data comes as Italian Prime Minister Giuseppe Conte is expected to unveil a plan to loosen restrictions to curb the spread of the virus.

“I would like to be able to say, let’s open everything. Right away,” Conte wrote on Facebook this week. “But such a decision would be irresponsible.”

“It would make the contagion curve rise uncontrollably and would jeopardize all the efforts that we’ve made until now,” he added.

The government of Italy, locked down since March, is facing mounting pressure from businesses to reopen.

“A reasonable expectation is that we will apply it from May 4,” Conte said. “We have to reopen on the basis of policy that takes into consideration all the details and cuts across all the data. A serious policy, scientific,” the prime minister added.

Italy, in March 2019, ignored warnings from the United States and European Union, becoming the first G7 country to sign with China’s controversial “One Belt, One Road” program, opening up sectors to Chinese investors, including state-owned firms.