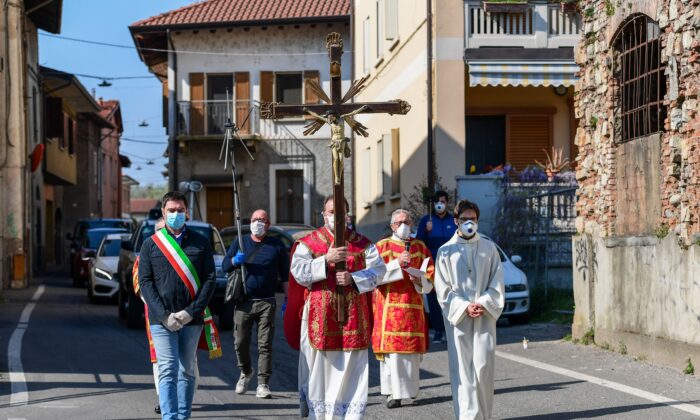 Parish priest of the Santa Maria Assunta church in Pontoglio, Don Giovanni Cominardi (C), is escorted by Pontoglio mayor Alessandro Seghezzi (L), during a Via Crucis procession (Way of the Cross) as part of Good Friday celebrations in Pontoglio, Italy, on April 10, 2020. (Miguel Medina /AFP via Getty Images)
WORLD

Shops, hair salons, and restaurants can finally operate again across Italy as the country seeks to ease its 10-week lockdown.

Italian Prime Minister Giuseppe Conte, over the weekend, said that the country is taking a “calculated risk” by allowing the restrictions to ease, adding that the “contagion curve” of the CCP (Chinese Communist Party) virus could again rise. He also announced that travel to and from Italy and between regions can resume on June 3.

Meanwhile, gyms, sports venues, and pools can reopen on May 25, he said, according to the BBC. Movie theaters can open on June 15.

Now, travelers from other European Union countries can enter Italy without undergoing a mandatory two-week-long quarantine.

“We are taking this risk and we have to accept it, otherwise we could not restart. We cannot wait for a vaccine,” Conte added to reporters.

“All interactions must respect the one-meter distance,” Conte noted. “We recommend that people always have a protective mask with them, which will have to be worn in certain areas including indoors,” he added.

The Treasury is predicting the economy will contract by at least 8 percent in 2020, the deepest recession since World War Two, and Prime Minister Giuseppe Conte said at the weekend he was taking a “calculated risk” in rolling back the rigid curbs. Although there was noticeably more traffic on the roads of major cities on Monday morning, some people appeared hesitant to resume their old habits.

Conte shut down most of the Italian economy in March as CCP virus cases began to spike, but over the past several weeks, he’s allowed some industries to return.

Angelo Lombardo, owner of Cocco Caffe in the northern city of Bologna, is allowed to serve a maximum four customers at any one time, but he said he wasn’t having to worry about social distancing rules at present.

“A lot of people are just walking past and looking in from outside wondering whether they can come in or not,” he said, criticizing the government for doing too little to explain how the rules had changed.

Italy on Sunday recorded 145 deaths over the past 24 hours, its lowest daily toll in weeks since the lockdown was declared, according to health officials.

According to researchers, 31,908 people have died and 224,760 have been infected with the virus in Italy.