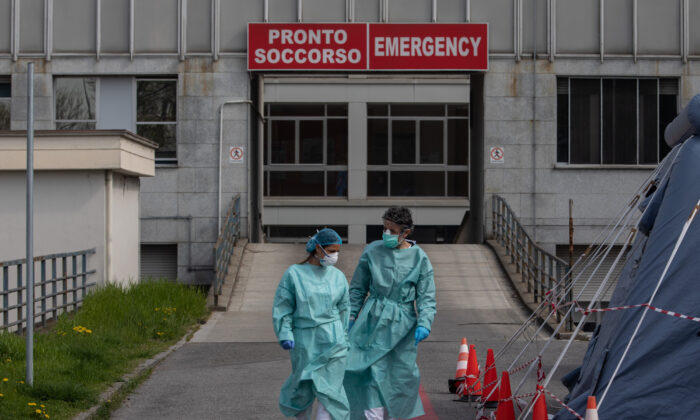 Two nurses walk in front of the Emergency Room of the local hospital in Cremona, near Milan, Italy, on March 20, 2020. (Emanuele Cremaschi/Getty Images)
WORLD

Italy on Monday reported a drastic decrease in the number of new COVID-19 cases while announcing that 812 people died in the past 24 hours, raising the total to 11,591.

The Civil Protection Agency said on Monday that the number of new cases of the CCP (Chinese Communist Party) virus, which is also known as the coronavirus, has dropped to 4,050, which is the lowest number since March 17, hitting a total of 101,739 cases overall, according to state-run ANSA.

Health authorities on Monday noted that the more than 1,500 recoveries from the virus in 24 hours were the single-largest increase since the pandemic started.

The virus first emerged in mainland China late last year before spreading to nearly every country in the world, killing tens of thousands of people.

“Each of us must respect the instructions of the authorities” and “we must follow the indication to stay at home and go out only for the bare essentials because only by respecting these measures will we be able to defeat the virus as soon as possible,” said Civil Protection head Angelo Borrelli in a news conference.

Italy implemented a nationwide lockdown earlier this month, shutting down nearly all aspects of everyday life.

“We are going in the right direction and we must not change our strategy in the slightest,” said Health Council chief Franco Locatelli. “It will not be a process of returning to normal from nothing to everything, it will be gradual. But the goal is to be able to contain the situation now, prevent further epidemic outbreaks, especially such as those seen” in Lombardy and in other parts of northern Italy.

Italians face steep fines of up to 3,000 euros ($3,350) for defying government orders of going outside for food and essential items only, Reuters reported last week.

Elsewhere in the European Union, Spain on Monday reported 812 virus fatalities in the past 24 hours while reporting more than 85,000 people have been infected, according to El Pais.

“The government is controlling the situation, it is dealing with the situation in the best possible way,” said Health Minister Salvador Illa at a news conference on Monday afternoon.