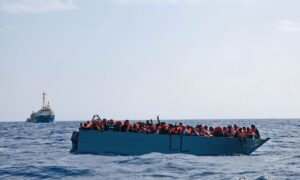 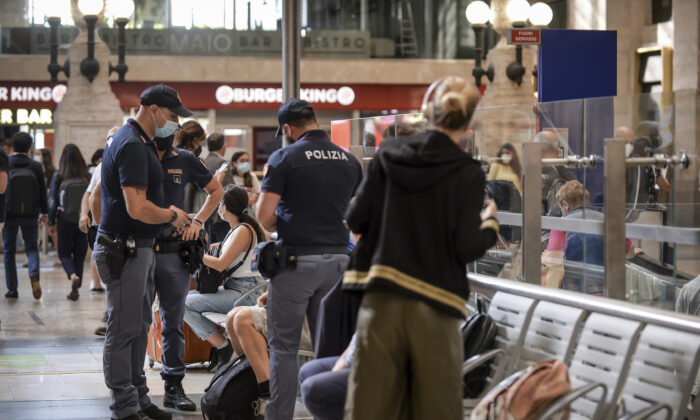 ROME—Italy’s government vowed to crack down on demonstrators threatening to block train tracks throughout the country Wednesday as a rule requiring COVID-19 tests or vaccines to use public transportation for long-distance domestic travel took effect.

In a bid to rein in the transmission of infections as Italians returned from summer vacations, the government announced weeks ago that passengers must show a so-called “Green Pass” to board domestic flights, trains, and buses traveling between regions.

The passes certify the holder received at least one vaccine dose more than 15 days prior, tested negative in the past 48 hours, or recovered from COVID-19 in the previous six months.

The requirement also applies to sea travel, although some ferries are exempt, such as ones serving tiny islands with no other connections to the mainland and those used by commuters between Sicily and the southern tip of the mainland in Calabria.

Local buses, trams, and subways also are exempt from the rule, which was announced by Premier Mario Draghi’s government when daily caseloads started steadily rising as the Delta variant of the virus became prevalent in Italy.

Opponents of the requirement called for sympathizers to gather at some 50 train stations, including in Rome and Milan, on Wednesday afternoon and vowed to occupy rail tracks, if necessary, to stop trains.

On the eve of the transportation rule taking effect, Italian Interior Minister Luciana Lamorgese said there would be zero tolerance for law breakers at track protests or for any violence.

“No illegal acts will be permitted in protest initiatives at train stations” organized for Wednesday, Lamorgese said.

So far, some 70 percent of Italy’s residents 12 years or older have been fully vaccinated. But experts have voiced concern that many people in the 50–69 age group haven’t received vaccines nor signed up for them.

At the main train station in Florence, the new requirement was announced on digital displays and loudspeakers.

“It’s great, because it allows us to travel more safely,” Arianna Bini, a 48-year-old pharmaceutical company manager waiting for a train to Ravenna. “Since I travel a lot, I feel more at ease.”

On a high-speed train from Milan, in northern Lombardy, to Reggio Calabria, at the southern “toe” of the Italian peninsula, a conductor asked passengers to show their passes along with their tickets. U.S. tourists showed their U.S. vaccine cards (CDC vax cards) and were also asked for their passports.

Riley Smith, a 26-year-old from New York who was traveling to Naples with a friend, said she knew what to expect. “New York just passed similar measures. I think it’s a good thing across the board.”

Other countries have adopted similar requirements or are about to put them in place.

Turkey’s Interior Ministry has ordered all domestic travelers over 18 to provide either proof of full vaccination, recovery from COVID-19, or a negative PCR test result. In a circular issued Tuesday, the ministry said the requirement would apply to intercity bus, train, and air travel starting Sept. 6.

Greece applies the same rules for domestic travel as for international travel. The country’s certificate requirements are similar to Italy’s for long-distance domestic travel. Individuals without the proper certification aren’t allowed to board.

France instituted a “health pass” requirement for domestic transportation on Aug. 9 that applies to high-speed, intercity, and night trains, as well as long-distance domestic flights and bus trips.

The French railway says that based on pre-boarding checks, 97 percent of travelers have produced a travel pass.

The requirement, along with mandatory vaccinations for health workers, prompted weeks of Saturday protests by activists and others angry at the French government.