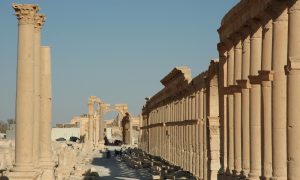 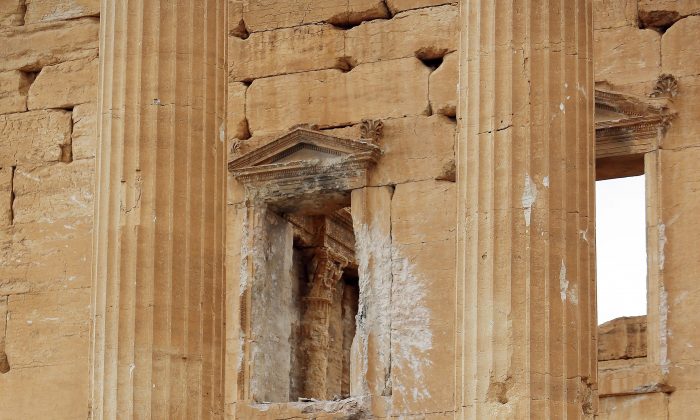 Damage during the Syria conflict caused by shelling on a wall in the ancient oasis city of Palmyra, 215 kilometres northeast of Damascus, Syria. (JOSEPH EID/AFP/Getty Images)
Middle East

Italy has unveiled a 60-strong task force of art detectives and restorers, ready to protect the world’s crisis-hit heritage sites for UNESCO in a cultural version of the UN’s famous Blue Helmets.

The task force, dubbed “cultural peacekeepers”, will be dispatched – when logistically possible – to assess the damage to globally prized monuments or works in the wake of conflicts, earthquakes, floods or other disasters.

The main aim is to stop the looting and selling of heritage by militants to fund “terrorist activities”, UNESCO said.

It will also help transfer movable objects to safety “and strengthen the fight against looting and illegal trafficking of cultural property”, the ministry said.

Italy’s art police have an international reputation for tracking down and recovering stolen works.
The hope, UNESCO director Irina Bokova said on Tuesday, February 16th, was that other countries would follow Rome’s example and join the heritage fight.

The idea for an Italian, cultural version of the United Nations peacekeepers – known by their distinctive blue helmets – was voted in by the UN after the destruction of sites including in Syria’s Palmyra by the Islamic State group.

IS seized control of Palmyra in May and has realised international fears by destroying some of the most prized sites in the UNESCO World Heritage listed ancient city.

The militants have carried out a sustained campaign of destruction against heritage sites in areas under their control in Syria and Iraq, including the important Iraqi sites of Hatra, Nimrud, and Khorsabad, the ancient Assyrian capital.

Islamist militants are also accused of being behind attacks on 10 religious and historic monuments in the UNESCO World Heritage city of Timbuktu in Mali.