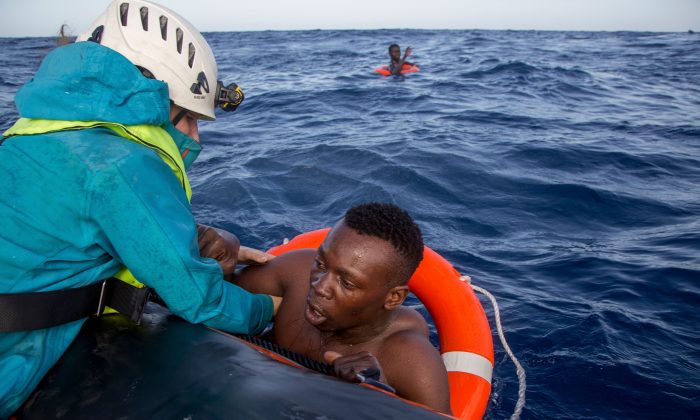 A member of German NGO Sea-Watch (L) helps a migrant to board a boat after he was recovered in the Mediterranean Sea on Nov. 6, 2017. (Alessio Paduano/AFP/Getty Images)
Europe

Spanish warship, Cantabria, delivered 374 migrants to the shores of Italy on Nov. 6. Most of them came from sub-Saharan African nations—Nigeria, Senegal, Ghana, Gambia and Sudan—with a few from Libya.

Twenty-three of them were found floating on a rubber raft with 64 migrants who were still alive. The other three were “discovered during other life-saving operations in the Mediterranean this week,” according to Agence France Press.

Italian prosecutors are investigating whether their deaths are linked to sex trafficking. Five migrants are being questioned by police about their part in the deaths.

The Cantabria docked at the southern Italian port of Salerno. The Prefect of Police there, Salvatore Malfi, called the incident “a human tragedy” and said his office has “appealed to neighboring towns to provide dignified burial for the Nigerian women,” according to NPR.

According to AFP, Police Prefect Malfi said it would be unusual for sex traffickers to put all their women on one boat.

“Loading women onto a boat is too risky, the traffickers would not do it as they could lose all their ‘goods—as they describe them—in one fell swoop,” he said.

Italian newspaper Corriere Della Sera reported that the number of Nigerian girls and women being sent to Italy and forced into prostitution has increased lately.

Overall migration into Italy is down from last year. To date, some 111,552 migrants have arrived in Italy by sea, according to the International Organization for Migration (IOM), and 2,639 migrants have died en route.

The same period of January through November last year saw 159,467 migrants arrive by sea while 3,615 people died in transit, according to the IOM.

In total, the IOM reports 150,982 migrants crossing the Mediterranean from North Africa to European ports. The number for the same period in 2016 was more than twice that, at 335,158.

Smugglers charge about $6000 per head to transport migrants from Africa to Europe, according the Italian aid group L’Abbraccio. About $4000 is for the overland journey to Libya, and the rest pays for passage across the Mediterranean.

An official from the office of Josiah Emerole, Nigerian National Director, Press and Public Relations, spoke on condition of anonymity about the hazards of crossing the ocean during the winter.

The official said that smugglers considered days where the sea was most turbulent to be “safe for smuggling.”

“Deaths are common on the Mediterranean because the smugglers force their victims to wait till when the sea is ‘safe,’ which to them means that security patrol is little,” the official told Punch-Nigeria.

“But the irony is that the patrol is little only when the sea is turbulent and thus, the traffickers push their victims aboard the ship and a wreck is inevitable.”