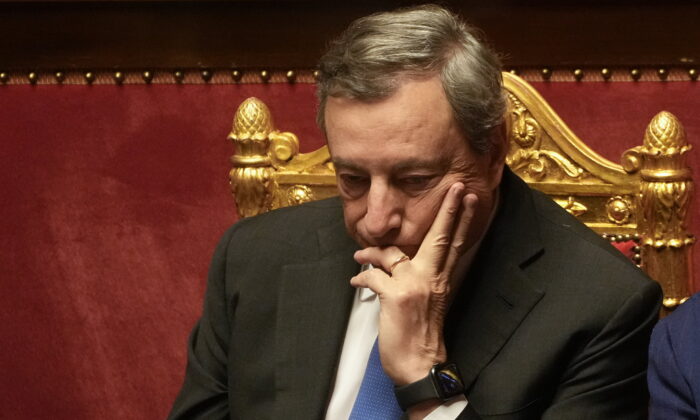 Italian Premier Mario Draghi pauses at the end of a debate at the Senate in Rome on July 20, 2022. (Gregorio Borgia/AP Photo)
Europe

ROME—Italy is headed for an early election after its president accepted Premier Mario Draghi’s resignation Thursday and decided there was no possibility for cobbling together another government following the rapid collapse of the ruling coalition.

The demise of Draghi’s coalition in the eurozone’s third-largest economy and the uncertainty of what Italian voters will decide at the polls have dealt a destabilizing blow to the country and Europe amid rising inflation and Russia’s war in Ukraine.

Dissolving Parliament “is always the last choice to make, especially if, as in this moment, there are important tasks to carry to completion,” President Sergio Mattarella said in a brief speech at the presidential Quirinal Palace, where Draghi had tendered his resignation hours earlier.

Mattarella’s office said the election will be held Sept. 25.

He appealed to political parties in their campaigning to keep in mind “the superior interests” of the nation. Citing soaring food and energy prices, he noted that those suffering the most are always the weakest in society.

“The period we are going through doesn’t allow for any pause in determining interventions to contrast the economic and social crisis, and in particular the increase in inflation, which brings heavy consequences for families and businesses,” he said.

Draghi was staying on at Mattarella’s request in a caretaker role, ensuring the government can carry out basic measures in the months before a new coalition is in place.

Parliament’s five-year term would have expired in March 2023, so effectively the election would be held barely six months ahead of time.

Mattarella noted the bad timing for the nation and the continent. But he said he had no choice after Wednesday evening, when three key parties in Draghi’s “unity” coalition refused to renew support in a confidence vote.

“The debate, the vote and the ways in which this vote was expressed yesterday in the Senate made evident the parliamentary support for the government had gone lacking and the absence of a prospective to give life to a new majority” in Parliament, the president said.

Mattarella had rejected a similar resignation offer from Draghi a week earlier.

Instability in Italy could ripple through Europe, also facing economic problems. Draghi had taken on statesman status as the European Union struggled to keep a united front against Russia, whose natural gas is heavily imported by Italy and other countries.

Draghi encouraged his caretaker Cabinet to keep its focus on Italy’s pressing problems.

“Italy has everything (needed) to be strong, authoritative, credible” in the world, Draghi said. The government must deal with the pandemic, the war in Ukraine, inflation, and energy costs as well as forge on with mandated economic reforms, he said.

Meanwhile, “let’s get back to work,” he added.

The former European Central Bank president was tapped by Mattarella 17 months earlier to guide Italy’s recovery after its economy was pummeled by COVID-19.

But this week, his coalition was sabotaged by Forza Italia of former Premier Silvio Berlusconi and two larger parties, the right-wing League of Matteo Salvini, and the populist 5-Star Movement led by Draghi’s predecessor in the premiership, Giuseppe Conte.

In a brief speech to the lower Chamber of Deputies on Thursday before renewing his resignation offer, Draghi appeared moved by the applause from lawmakers there, quipping that even central bank chiefs have hearts.

Dubbed “Super Mario” for helping to lead the eurozone out of its debt crisis when he led the ECB, Draghi played a similar calming role in Italy in recent months. His presence helped reassure financial markets about the debt-laden nation’s public finances, and he managed to keep the country on track with economic reforms that the EU had made a condition of its 200 billion-euro (-dollar) pandemic recovery package.

He was a staunch supporter of Ukraine, even as the leaders of the 5-Stars and the League, two forces long favorable to Russia, appeared to waver in their support to supply Kyiv with arms. Draghi became a leading voice in Europe’s response to Russia’s Feb. 24 invasion.

A photo of Draghi, chatting with the leaders of France and Germany on a train to Kyiv, quickly became the iconic image of Italy as one of the strongest backers of Ukraine. He had pushed for the country’s candidacy for EU membership.

While he could not keep his fractious coalition together, Draghi appeared to still have broad support among Italians, many of whom have taken to the streets or signed open letters in recent weeks to plead with him to stay on.

Nicola Nobile, associate director at Oxford Economics, warned that Draghi’s departure and the wait for a new government could worsen economic turbulence in Italy, which investors worry is carrying too much debt and which was already looking at a marked slowdown for the second half of the year.

Opinion polls have indicated the Democratic Party and the Brothers of Italy party, which had remained in the opposition, are neck-and-neck.

Brothers of Italy has long been allied with Berlusconi’s and Salvini’s forces. If they stay teamed up in an election campaign, that could sweep the right into power. Giorgia Meloni, who leads the Brothers of Italy, is eager to become the country’s first female premier.

“The will of the people is expressed in one way: by voting. Let’s give hope and strength back to Italy,” she said.

By Nicole Winfield and Frances D’Emilio