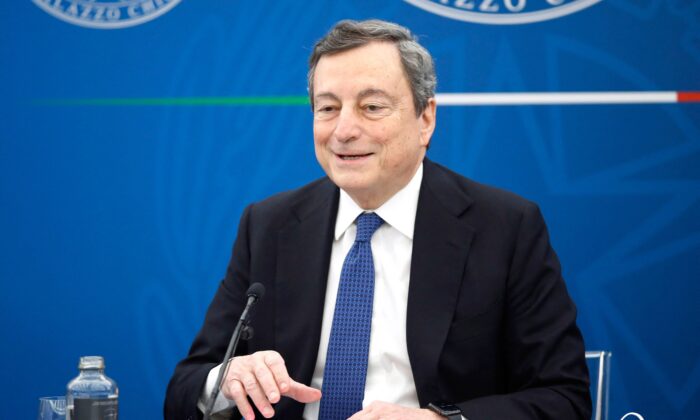 Italy on March 31 became the first EU country to mandate that its health care workers be vaccinated against COVID-19, the disease caused by the CCP virus, in a move the government said is aimed at protecting its vulnerable patients in hospitals.

In a decree passed by Prime Minister Mario Draghi’s cabinet, all health care workers, including pharmacists, “are required to undergo vaccination,” and those who refuse to be vaccinated could face suspension without pay for the remainder of the year.

“The aim of the measure is to protect as much as possible both medical and paramedical staff and those who are in environments that may be more exposed to the risk of infection,” the government said in a statement.

The measure also grants legal protection for those who administer the COVID-19 vaccines, something doctors and nurses had demanded after medics were placed under investigation for manslaughter following the death of a vaccinated man in Sicily.

It comes amid a series of CCP (Chinese Communist Party) virus outbreaks in the country’s hospitals that some believe were accelerated by unvaccinated health care workers.

Last month, several health care workers were infected at Bologna’s Sant’Orsola hospital, and in February, two employees at Rovigo’s Santa Maria della Misericordia hospital who had refused to be vaccinated were suspected of spreading the disease to patients.

Draghi told reporters at a press briefing last month that the move would protect vulnerable people in hospitals.

“It is absolutely not OK that unvaccinated workers are in contact with the sick,” Draghi said, the New York Times reported.

Italy, whose vaccine campaign has been hampered by supply delays that have also hit other European Union countries, has pledged to reach 500,000 daily inoculations in April from around 230,000 at present.

Three COVID-19 vaccines have been approved by Italy’s medicines agency—AstraZeneca, Pfizer, and Moderna.

Some 10 million doses have been administered since late December, with around 3.1 million of Italy’s 60-million-strong population receiving the recommended two shots.

No other country in the EU has mandated COVID-19 vaccines for its health care workers, however France has mulled the idea. The UK is reportedly considering mandatory jabs for care home staff.

Medical professionals responding to a Medscape post titled “Should COVID-19 Vaccination Be Mandatory for Healthcare Workers?” offered differing perspectives on the matter.

Antonio Pujol de Castro, president of the Spanish Medical Student Council (CEEM), suggested that people may begin to “question” the vaccines if they are made mandatory.

“We, as healthcare workers have the privilege to know how to gather information about health issues, and make our own clinical decisions. As health workers we should be exemplar and get vaccinated because there is evidence of its benefits to the population,” he wrote.

“However, we are not just health workers. We also are individuals with our own beliefs, preferences and fears. I feel like we, as health workers should highly recommend to our colleagues to vaccinate themselves, give them information, and make them feel that in order to stop this virus we have to be on the same boat, and doing so means vaccinating everybody, especially healthworkers.”

Romania-based Dr. Serban Comsa added that “all medical therapies should respect the principle of consent to treatment.”

Dr. Mahazu Yisa, who specializes in the management of chronic disease in London, said he believes that COVID-19 vaccines should be mandatory for health care workers to “protect the individual, his or her colleagues and patients.”

“All three above are essential for safe healthcare delivery,” Yisa wrote.

New York-based neurologist Dr. Josh Torgovnick, 72, meanwhile proposed that mandating the vaccination of health care workers would mean that “no-one can be accused of discrimination and the world will be a healthier place.”

“If you can prevent a potentially deadly disease and don’t, that is akin to murder,” Torgovnick said.

Dr. Rajiv Singh said that he is “amazed at how readily we are undoing civil liberties in the name of national security or nanny health over the last 20 years.”

“The history of the last 500 years is largely about the fight for individual liberty and freedom and however uncomfortable, we cant force vaccination,” he wrote. “To those who say that it puts other at risks, sadly this is true. But so do many people as a result of their health and lifestyle decisions. We can’t impose health decisions.”