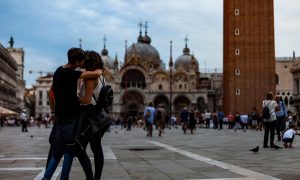 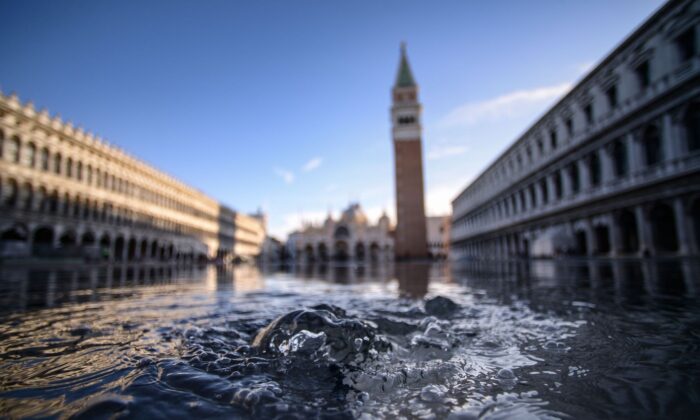 Water bubbles up from a manhole on the flooded St. Mark's Square in Venice on Nov. 14, 2019. (Filippo Monteforte/AFP via Getty Images)
Europe

Italy on Thursday declared a state of emergency for Venice after severe storms coinciding with a high tide on Nov. 12 caused extensive flooding in the lagoon city, with waters entering the St. Mark’s Basilica and submerging town squares.

Prime Minister Giuseppe Conte described the flooding as “a blow to the heart of our country,” after spending Wednesday night in Venice, where world-famous monuments, homes, and businesses remained swamped by the Acqua alta or “high water”—a periodical high tide that occurs between late September to April, but especially in November, when the moon, sun, and weather conditions align.

Tuesday’s hurricane-like storm coincided with a full moon, creating the second-worst flooding ever recorded in Venice since the historic 1966 flood that reached 1.94 meters (6 feet 4 inches) above sea level.

About 85 percent of the city was flooded on Tuesday as water levels reached 1.87 meters (over 6 feet, 1 inch) above sea level—just 7 centimeters (2.5 inches) below the 1966 record. Another wave of exceptionally high water followed on Wednesday.

“It was apocalyptic, enough to give you goosebumps,” Venetian shop owner Marina Vector told AFP. “The storm was so bad it broke the marble flood barrier out front. Nothing’s survived.”

“I’ve never seen anything like it in my life. There was a terrifying wind, it was a hurricane. It was horrible,” another local Cristina told AFP as she fought back tears.

The high waters caused the crypt beneath St. Mark’s Basilica to inundated for the second time in its history. Venice archbishop Francesco Moraglia said St. Mark’s Basilica had suffered “irreparable damage,” with salty water posing risks to its mosaics, columns, and pavements. Meanwhile, the adjacent basilica was flooded for the sixth time in 1,200 years.

“Venice is on its knees,’’ Mayor of Venice Luigi Brugnaro said on Twitter on Nov. 13. “St. Mark’s Basilica has sustained serious damage, like the entire city and its islands.”

He called for the speedy completion of “Mose”—a long-delayed, 5.5 billion ($6.1 billion) euro flood-protection system designed in 1984 to protect Venice from high tides.

Construction of the moveable undersea barriers began in 2003 with an estimated cost of 1.6 billion euro. It was scheduled for completion in 2011.

However, due to various reasons—including corruption scandals, costs overruns, and environmentalists’ opposition over its effects on the city’s lagoon ecosystem—the barrier will not be ready until 2021, Italian Transport and Infrastructure Minister Paola De Micheli said. Former mayor Giorgio Orsoni resigned in 2014 to be arrested along with other officials for embezzling millions in Moses funds.

“We’re used to flooding, and I don’t believe in climate change,” Arrigo Cipriani, owner of the famous Harry’s Bar, told Italian news outlet Corriere Della Sera, adding that his bar stayed open on Tuesday as it did during the 1966 flood.

In addition to sea-level rise, Venice is experiencing well-documented subsidence—most of which occurred during the 20th century.

According to Pietro Teatini, a hydraulic engineer at the University of Padua in Italy, Venice—which sits on thousands of wooden piles driven into the mud—subsided about 120 millimeters (4.7 inches) between 1950 to 1970 due to extraction of groundwater and shifting plate tectonics. During those 20 years, sea levels rose about 110 millimeters (4.3 inches).

Now that the pumping of groundwater has stopped, Venice is sinking—both due to subsidence and sea-level rise—at a slower rate of 1 to 4 millimeters (one-fifth of an inch) each year. Southern Venice is sinking faster than the north.

Venice’s tide office reported approximately 100 millimeters (4 inches) of sea-level rise in Venice over the last 50 years, which is less than half of what was experienced before 1970.

While Brugnaro and Democratic Party councilor Andrea Zanoni have linked the current storm and flooding to climate change, a team of international scientists reported to the journal Climatic Change that “higher sea levels will be counteracted by less severe storm surges” in the Venice lagoon, lead author Dr. Alberto Troccoli told the Australian Broadcasting Corporation in 2011.

“The survival of Venice and its lagoon is seriously questioned under the International Panel on Climate Change (IPCC) global sea level rise scenarios … we found that the frequency of extreme storm surge events affecting Venice is projected to decrease by about 30 per cent by the end of the 21st century, which would leave the pattern of flooding largely unaltered under 21st Century climate simulations,” Troccoli said at the time.

Brugnaro has estimated that the damage to the city will reach hundreds of millions of euros.

“We are not just talking about calculating the damages, but of the very future of the city,’’ Brugnaro told reporters. “Because the population drain also is a result of this.”

One man in his 70s was reported electrocuted to death when he tried to start a pump in his dwelling on the barrier island of Pellestrina, said local official Danny Carrella. Pellestrina has a population of 3,500.

Italy’s culture minister, Dario Franceschini, said no damage to art collections in museums across the city had been reported.

Gritti Palace, a glamorous hotel on the Grand Canal that dates back to the 15th century, was one notable historic interior that was inundated on Tuesday.

Designer Chuck Chewning, who renovated the palazzo in 2013, posted photos of the flooded interiors to Instagram on Wednesday, saying that the damage was “devastating.”

Tourists floated suitcases through St. Mark’s Square, where officials removed walkways to prevent them from drifting away.

Shop and hotel owners placed boards on doors in an attempt to hold back the water.

Many parts of the country in the south have been pummelled by torrential rain, with reports of widespread flooding in recent days. More high water is expected.