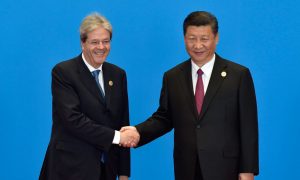 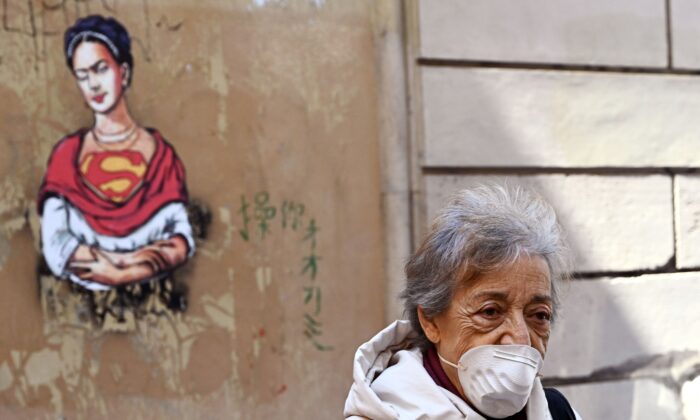 A woman wearing a face mask walks through the Jewish district in central Rome, Italy, during the country's lockdown aimed at stopping the spread of the COVID-19 pandemic on March 24, 2020. (Vincenzo Pinto / AFP via Getty Images)
WORLD

The death toll from the CCP virus in Italy has risen by 743 over the past 24 hours to a total of 6,820, according to the head of the Civil Protection Agency on Tuesday.

On Monday, 602 people died, and a day before that, on Sunday, 650 died. The highest death toll to date was recorded on Saturday when 793 people died, officials said.

The disease is caused by the new coronavirus, which The Epoch Times refers to as the CCP virus because the Chinese Communist Party’s coverup and mishandling allowed the virus to spread throughout China and create a global pandemic.

Italian authorities on Monday hoped that the daily drop in deaths would mark a turning point in the fight against the viral pandemic.

The Civil Protection Agency said 8,326 people recovered from the CCP virus, which is 894 more people than yesterday, according to state-backed ANSA.

“The measures we took two weeks ago are starting to have an effect,” Civil Protection chief Angelo Borrelli said, The Local reported. Data over the next several days will allow researchers to see “if the growth curve is really flattening,” he remarked, adding that the actual number of infected people is probably about 10 times higher than the official county.

All businesses deemed nonessential will have to remain closed until April 3, Conte said. However, there has been speculation that the date will probably be pushed back.

Conte said he is hoping to do away with the lockdown as soon as possible. But “it is early to say” when this crisis will end, he told La Stampa on Monday

Finance Minister Roberto Gualtieri noted that Italy’s economy contracted “sharply” in March and will likely do the same in April amid the lockdown measures, according to Bloomberg News.

Nearby France and Spain have also implemented strict lockdowns as CCP virus cases in the two respective countries continue to rise. Spanish authorities on Tuesday reported that more than 500 people died in the previous 24 hours, raising the death count to 2,696.

The Spanish Ministry of Health on Tuesday announced that more than 39,000 cases are present in the country after a sharp rise over the previous day.