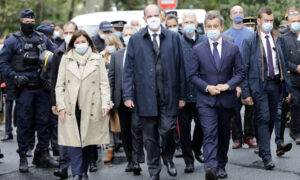 Clashes Erupt Between Armenia and Azerbaijan over Nagorno-Karabakh
0
Europe

Prosecutors have launched a criminal investigation
By Tom Ozimek
Print

As rescuers scoured the twisted steel and concrete wreckage of the collapsed viaduct in the Italian city of Genoa that killed 39, furious government ministers blasted the bridge operator, saying it should pay for the disaster and lose its concession.

Interior Minister Matteo Salvini said the private company that operated the bridge had earned “billions” from tolls but “did not spend the money they were supposed to.”

“Imposing the highest penalties possible and making sure that those responsible for the dead and the injured pay up for any damages and crimes is the very least,” Salvini said.

The 51-year-old bridge, part of a toll motorway linking the port city of Genoa with southern France, collapsed during torrential rain on Tuesday, Aug. 14, sending dozens of vehicles crashing onto a riverbed, a railway, and two warehouses.

“The scene is apocalyptic, like a bomb had hit the bridge,” Matteo Pucciarelli, a journalist for the Italian daily La Repubblica, told the Guardian. “There are about 200 rescuers working continuously. People are in shock.”

Footage of the collapse, with cries from an onlooker—“Oh God! Oh God!”—showed a flash of light as the bridge crumbled out of view.

“We’re not giving up hope, we’ve already saved a dozen people from under the rubble,” a fire official, Emanuele Giffi, told AFP. “We’re going to work round the clock until the last victim is secured.”

So far four people have been pulled alive from cars found in the mangled ruins.

Eyewitness Ivan, 37, evacuated from a nearby building, described the collapse as unbelievable.

“To see a pylon come down like papier-mâché is an incredible thing,” he said. “It’s been a lifetime that we’ve known there were problems. It is in continual maintenance. In the ’90s they added some reinforcements on one part, but also underneath you can see rust.”

Italy’s deputy prime minister, Luigi Di Maio, said in a Facebook post on Aug. 15, “Those responsible for the tragedy in Genoa have a name and a surname, and they’re called Autostrade per l’Italia.”

“For years it’s been said that private management would be better than that of the state,” Di Maio said. “And so today, we have one of the biggest dealers in Europe telling us that the bridge was safe and there was no worry of it collapsing. Autostrade had to maintain it but didn’t.”

Autostrade, a unit of Milan-listed Atlantia group, said it had done regular, sophisticated checks on the structure before the disaster, relying on “companies and institutions, which are world leaders in testing and inspections” and that these had provided reassuring results.

“These outcomes have formed the basis for maintenance work approved by the Transport Ministry in accordance with the law and the terms of the concession agreement,” it said.

Danilo Toninelli, the infrastructures and transports minister,  said on Wednesday the collapse was “unacceptable” and that if negligence was a factor “whoever made a mistake must pay.”

According to the Guardian, Toninelli called on the top level of Autostrade to “step down first of all.” He also told RAI television the government intended to cancel its deal with the company to manage the A10 toll motorway connecting Genoa to the French border.

“I have given mandate to my ministry to start all proceedings to apply the agreement, that is to revoke the concession from these companies and seek significant sanctions,” he said.

“Queues of cars and the volume of traffic cause intense decay of the Morandi viaduct structure on a daily basis,” Marigliani said, the Daily Mail reported.

“The bridge was constantly monitored and supervised well beyond what the law required,” he said. “There was no reason to consider the bridge dangerous.”

Autostrade was about to launch a 20 million euro ($23 million) bidding process for major safety improvements to the bridge.

The tender would have covered strengthening of the bridge’s pier cables, including those of pier nine, the one that collapsed on Tuesday.

Italian prosecutors have launched a criminal investigation into the cause of the disaster.

Engineering experts say it’s too early to say why the bridge disintegrated, but point to a history of problems with its design.

‘A Tragedy Waiting to Happen’

The aging bridge, designed by the renowned Italian engineer Riccardo Morandi, was fraught with “structural doubts.”

That is how an article in the specialist engineering website Ingegneri.info referred to the structure, calling it “a tragedy waiting to happen.”

Antonio Brencich, a professor of reinforced concrete construction at the University of Genoa, told Radio Capitale that Morandi’s technology “was affected by extremely serious corrosion problems” and was over time shown “to be a failure.”

Guido De Roeck, professor emeritus at KU Leuven, a university in Belgium, told VRT news a vulnerable point of Morandi’s design was the “limited number of cables, not steel cables, but pretensioned concrete cables, which are subject to corrosion.”

Ian Firth, former president of The Institution of Structural Engineers, told the Daily Mail, “It is too early to say what caused the tragic collapse, but as this reinforced and prestressed concrete bridge has been there for 50 years it is possible that corrosion of tendons or reinforcement may be a contributory factor.”

In the wake of the disaster, Giuseppe Conte, the prime minister, said that “all infrastructure” across the country needed to be double-checked. “We must not allow another tragedy like this to happen again.”

Toninelli echoed these concerns, saying that many structures in Italy suffer from insufficient safety checks.

“There has not been sufficient maintenance and checks, and safety work for many bridges and viaducts and bridges in Italy constructed – almost all – during the 1960s,” he said.

Tens of thousands of bridges and viaducts built in the 1950s and 1960s should be repaired or replaced.

Updating and reinforcing the bridges, CNR said, the Telegraph reported, would in many cases be more expensive than demolishing them and building new structures from scratch.