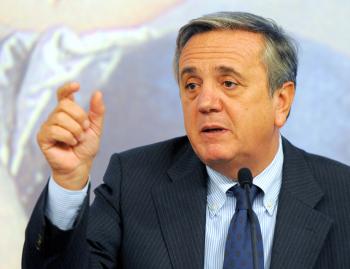 Kremena Krumova
Kremena Krumova is a Sweden-based Foreign Correspondent of Epoch Times. She writes about African, Asian and European politics, as well as humanitarian, anti-terrorism and human rights issues.
View profile
Follow
biggersmaller
Print
One of the world's strongest economies and a European Union powerhouse, Italy may be on the verge of financial collapse, said Italian officials expressing a growing concern about the ongoing financial meltdown that is affecting all sectors of the country's ailing economy.

“The threat of bankruptcy of our national economy should be considered real,” Italian Minister of Welfare Maurizio Sacconi said as he and other officials sounded the alarm in a TV broadcast on Wednesday evening during a discussion about the world's economic crisis.

“A bankruptcy scenario is even more horrifying than the recession one,” Sacconi, who is also an associate of the Italian Prime Minister Silvio Berlusconi, warned.

“The collapse of the world financial system may cause the Italian state to be unable to pay pensions and salaries to government employees,” added an unnamed leading member of the Forza Italia political party, the party of which both Berlusconi and Sacconi belong to.

Contrary to what many of his governmental colleagues were saying, Minister of Economy and Finance Giulio Tremonti countered that the economic situation was not dire. Trying to tame the intense public panic that Sacconi caused with the statement, Tremonti said in an interview for the Peruvian La Republica newspaper that “Italy has a very strong economy. National debt is absolutely stable and is guaranteed by the state.”

However, Tremonti admitted that due to the deepening economic crisis, a whole new, decisive package of measures has to be implemented starting in 2009, one that aims to deal with escalating unemployment through new social subsidies.

Tremonti also sent out a message of encouragement to the nation saying that "Italy is in much better shape that we believe it is," despite the fact that the country currently operates on the third-biggest public debt in the world.

In November, Italian Prime Minister Berlusconi asked the public not to panic and not to unjustifiably reduce consumer spending, which he said would lead companies to produce less, cut jobs, and fuel unemployment.

Berlusconi also stated that the government would adopt a series of measures in order "to deal with the crisis in the real economy, including actions to support families."

A report of Italian labor unions issued last week revealed a constant decrease in employment rates, with 900,000 more employees to be laid off by the end of 2009.

Telecom Italia – the largest telecommunications operator in Italy – said in a recent announcement that it would trim 4,000 jobs from 2009 to 2011 as part of a new restructuring plan.  The new initiative would save the company two billion euros (2.54 billion US dollars) by 2011 and lead to a sharp curtailment of its debt, the company said. Telecom Italia currently employs 66,000 people throughout Italy.