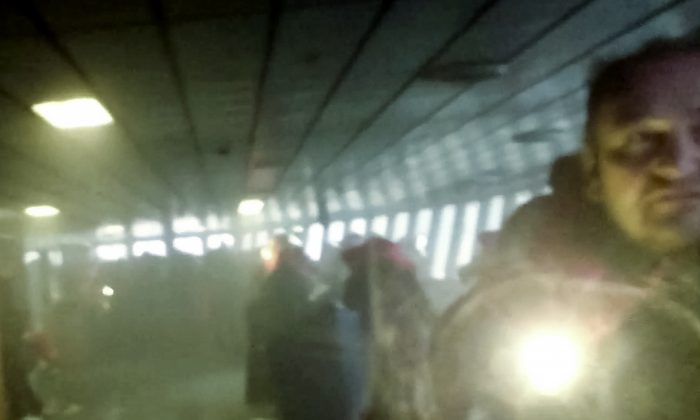 Passengers of the Italian-flagged ferry Norman Atlantic wait to be rescued after it caught fire in the Adriatic Sea. More than 400 people were rescued from the ferry, most in daring, nighttime helicopter sorties that persisted despite high winds and seas, after a fire broke out before dawn Sunday on a car deck. Both Italian and Greek authorities have announced criminal investigations into the cause of the blaze. Italian authorities warned Tuesday that more bodies will likely be found when the blackened hulk of a Greek ferry is towed to Italy, as part of a criminal investigation into the fire that engulfed the ship at sea, killing at least 11 of the more than 400 people on board. (AP Photo/APTN)
Europe

BRINDISI, Italy—Stormy weather in the Adriatic Sea thwarted efforts Wednesday to tow a fire-ravaged ferry to Italy so authorities can investigate the blaze that killed at least 11 people and search the ship for more possible dead.

Ninety-eight people were still unaccounted for Wednesday after a pre-dawn fire raced through the Norman Atlantic ferry on Sunday, Bari prosecutor Giuseppe Volpe was quoted as saying by the ANSA news agency.

It’s not clear if those people ever boarded the ferry — which left Greece on Saturday bound for Italy — if they were rescued, or if they died in the fire or in the sea. Hundreds were rescued in the maritime disaster, but the exact number of ferry survivors and how many were onboard to begin with are still not known.

Volpe said he hoped that Greek authorities would be able to say many people had been rescued by various ships and brought to Greece. Greece’s coast guard later said nine Greeks were still missing but did not resolve other questions.

“We maintain reservations as to the precise number of rescued people that we can make public, as the information forwarded to us so far by Italian authorities contains names listed twice and misspellings in the names registered,” the ministry said in a statement.

Volpe told Sky TG24 TV it was important to have the ferry towed to Italy “to see if there are bodies aboard…to ascertain what caused the fire and to see if safety measures were respected.”

He said until the wreck was examined, he couldn’t venture a possible cause for the blaze.

The Italian captain of the Italian-made ferry, which was operated by a Greek company, was questioned in the southern port of Bari by prosecutors for more than five hours Wednesday. Since a probe is underway, Volpe would not give any details about the questioning.

Nearly 40 survivors finally stepped ashore Wednesday in the Italian port of Taranto, brought by one of the cargo ships that rescued passengers from the flaming, smoke-shrouded ferry in the first hours of the maritime disaster. The blaze on the ferry’s car deck sent people scrambling for their lives in the freezing cold, pelted by rain and buffeted by gale-force winds on the uncovered top deck.

Amateur video made by two Turkish passengers who spent two days aboard the ferry showed clouds of black smoke belched up by the fire and bursts of flame as survivors lined up to be rescued by helicopters.

In the video, obtained by The Associated Press, Italian rescue helicopters hoisted survivors one by one via cords or inside wire baskets. Passengers in orange lifejackets and makeshift hats shifted their feet and shoved their hands in their pockets, trying to keep warm.

Snow fell Wednesday in usually temperate southern Italy and winds whipping up to 70 kph (45 mph) made for rough seas as a tugboat crew tried to secure the wreck.

“The shipwreck that we are towing is not anchored, and so it tends to move,” said Giuseppe Barretta, owner of the tug company. He estimated once the ferry was secured, the tow to Italy could take up to 12 hours.

The Norman Atlantic was closer to Albania than Italy and was listing slightly to the right, Barretta said. Smoke was still pouring out, probably from the burning cars and tires inside, he said.