Italians and the European Project 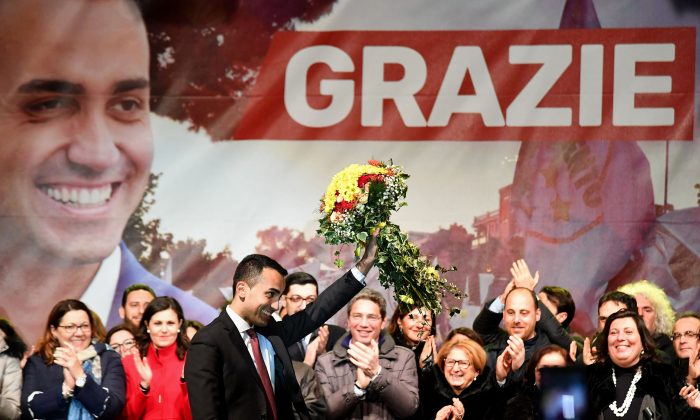 On June 1, a populist government took over in Rome, capping a political drama that sent European financial markets into turmoil as the future of the euro region was again thrown into doubt.

The anti-corruption Five Star Movement (M5S) and the League took power in a coalition, ending 88 days of political deadlock. Giuseppe Conte, a law professor with no political experience, was sworn in as prime minister along with his cabinet.

The short-lived government resulted from an inconclusive election on March 4, when no single political party won enough votes to command a majority in parliament. Prior to the election, voters were warned by officials that attempts by Russia to swing the election through social media might favor populist parties.

Additional friction between Brussels and the coalition arose with a foolish remark by Jean-Claude Juncker, president of the European Commission, suggesting that southern Italians are lazy. That EU elites indicate disrespect for Italians and their democratic choice is clearly toxic when Brussels is struggling for legitimacy and popular support among many southern Europeans.

The change at the top of the euro region’s third-largest economy comes after markets went into freefall with the prospect of a resurgence of the crisis that has gripped the single currency in recent years. Italy’s new government threatens to challenge the EU on budget rules and immigration.

Before the M5S-League alliance, both parties garnered pre-election support with slogans and promotion of a revolt against “elites” in the name of a “direct democracy.” After meshing their programs, M5S’s Luigi Di Maio and the anti-immigrant League’s Matteo Salvini pulled the plug on a government at the last minute after President Sergio Mattarella vetoed their pick of a Euroskeptic finance minister, and asked Carlo Cottarelli, a former IMF official, to become interim prime minister.

Conte was then put forward as prime minister. Di Maio and Salvini will now serve as deputy premiers, with economist Giovanni Tria, as finance minister. Paolo Savona, the rejected finance minister, will be responsible for European affairs.

The new government is expected to face votes of confidence in both houses of parliament on June 4 to 5.

The March election turned on anti-immigration and anti-EU issues. Like Greece, Italy has gone from being a pro-EU country to being critical within only a few years.

Below the groundswell of political resentment that brought M5S and the League to power lies the reality that the lack of adequate EU support with the influx of refugees turned Italians towards anti-EU populism. Many Italians consider that Italy has given more than it has received, with funds diverted to eastern Europe while southern Italy languishes.

The M5S-League agreement is a mix of liberal policies and socially-minded populist moves. It doesn’t call for an exit from the euro, yet both parties have previously called for it.

The coalition’s promise of popular reforms rattled Italian markets and prompted warnings from European allies, calling on the new government to respect EU budget rules and not endanger the stability of the Eurozone.

The coalition plans to control the government through a “conciliation committee” and to weaken parliament by making it impossible for lawmakers to switch parties even though the freedom to do so is written into the Italian Constitution.

Their contract also pledges to keep Italy in NATO and preserve the alliance with the United States, while “reaching out to Russia … as an economic and commercial partner” and calling for an immediate end to all Western sanctions on Russia and for the rehabilitation of Moscow as a “strategic counterpart” to solve regional conflicts in Syria, Libya and Yemen.

Italy was a founding member of the EU, and Italians have been staunch defenders of the European project. Civil society and Italians as a whole must now oppose the narrow views and policies of populists and nationalists during this test of their democracy.

Antonella Rampino, the Italy-based writer for The Guardian, warns, “We’ll move from a society that is traditionally open and welcoming … to the closed horizons of a country that resembles a corporate, statist, and repressive autarchy.”

Italy’s many friends around the world should encourage Italian voters not to allow that to happen.