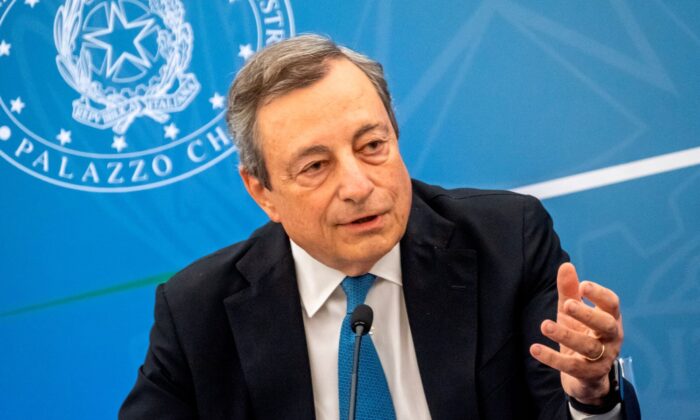 ROME—Italian Premier Mario Draghi offered to step down Thursday after a populist coalition partner refused to vote for a key bill in Parliament, but the nation’s president quickly rebuffed him, leaving one of Western Europe’s main leaders at the helm for now.

The rejection of the tendered resignation left in limbo the future of Draghi’s 17-month-old government, officially known as a national unity coalition, but with its survival sorely tested by increasingly sharp divergences within the coalition.

Draghi’s broad coalition government—which includes parties from the right, the left, the center, and the populist 5-Star Movement—was designed to help Italy recover from the coronavirus pandemic.

Hours earlier Thursday, Draghi and his government won a confidence vote, 172–39, in the Senate despite the refusal by the 5-Star Movement to back the bill, which earmarked 26 billion euros (dollars) to help consumers and industries struggling with soaring energy prices. But the dramatic snub, orchestrated by 5-Star leader Giuseppe Conte, Draghi’s predecessor, did its damage.

Shortly before heading to the Quirinal presidential palace to tender his resignation, Draghi declared: “The majority of national unity that has sustained this government from its creation doesn’t exist any more.”

But President Sergio Mattarella told Draghi to instead go back to Parliament and see if he can still garner solid support, a palace statement said.

The next showdown in Parliament is set for July 20, when Draghi will formally pitch for support ahead of a confidence vote—this time not on a specific bill but on his government’s very viability.

“Now there are five days to work so that Parliament confirms its confidence in the Draghi government and Italy emerges as rapidly as possible from the dramatic unraveling” of the last hours, Enrico Letta, the head of the Democratic Party, a Draghi ally and a former premier, wrote on Twitter.

The uncertainty over Draghi’s staying power also appeared to rattle the markets. The Milan stock exchange lost 3.44 percent on Thursday.

If Draghi can’t solidly stitch back together a durable coalition, Mattarella could pull the plug on Parliament, setting the stage for an early election as soon as late September. Currently, Parliament’s term expires in spring 2023.

Mattarella had tapped the former European Central Bank chief—who was known as “Super Mario” for his “whatever it takes” rescue of the euro—to pull Italy out of the pandemic and lay the groundwork to make use of billions in European Union pandemic recovery funds.

The 5-Stars, who have lost significant support in recent local elections and have slumped in opinion polls, are in disarray.

In the measure Thursday, the 5-Stars opposed a provision to allow Rome to operate a garbage incinerator on the outskirts of the chronically trash-choked Italian capital.

In the debate, some senators praised Draghi as a pivotal figure in Europe as Russia wages war against Ukraine, especially with the impending departure of British Prime Minister Boris Johnson.

Sen. Antonio Saccone thundered that the 5-Stars were “doing a favor” to Russian President Vladimir Putin by causing political instability.

Recently, Conte had waffled for a while over whether to keep supporting military aid for Ukraine, but eventually backed Draghi on pledging fresh assistance.

Being in a government “is not like picking up a menu and deciding, antipasto, no, gelato, yes,″ said Emma Bonino, who leads a tiny pro-Europe party.

Draghi has governed with the support of virtually all of Italy’s main parties, with the exception of the fast-rising right-wing Brothers of Italy party. The potential implosion of Draghi’s coalition triggered fresh demands by the party’s leader, Giorgia Meloni, for an early election that she hopes will be her springboard to becoming Italy’s first woman premier.

Giovanni Orsina, a history professor and director of the school of government at Rome’s LUISS university, correctly predicted that Mattarella would ask Draghi to find a new, workable majority.

“We’ve got the pandemic, we got the war, we have inflation, we have the energy crisis. So certainly this is not a good moment,” Orsina said. “Mattarella believes, rightly, that his mission is to safeguard stability.”

Among Draghi’s achievements has been keeping Italy on track with reforms that the EU has made a condition for the country to receive 200 billion euros (dollars) in pandemic recovery assistance. Much of that EU funding is already allocated, suggesting it won’t be lost even amid government instability.