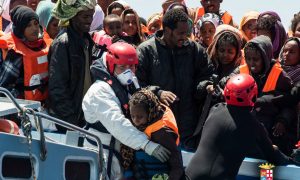 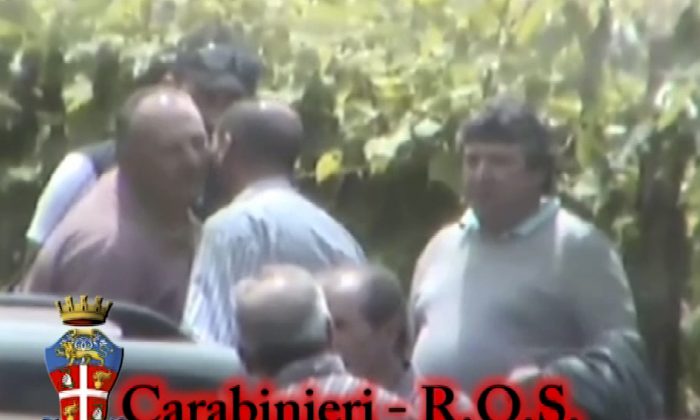 In this photo taken from a video provided by the Italian Carabinieri (paramilitary police), people identified by police as Italian cryme sindicate 'ndrangheta' members kiss each other. Police in northern Italy say for the first time they have video of a secret, ritual swearing-in ceremony for the 'ndrangheta', a powerful Italian crime syndicate. Their investigation also led to 40 arrests in a crackdown of extortion by mobsters preying on businesses in Lombardy and across the border in Switzerland. Milan Prosecutor Ilda Boccassini told reporters Tuesday the video of the ritual ceremony for recruits shows how the strength of the 'ndrangheta' is the force of tradition." (AP Photo/Carabinieri)
Europe

ROME—Recruits for Italy’s ‘ndrangheta crime syndicate have been caught on video taking a loyalty oath, swearing “under the splendor of the moon,” in a ceremony secretly recorded by police in what investigators called authorities’ first such glimpse of the ritual.

Carabinieri paramilitary police in Milan on Tuesday released video of what they said were two “convivial” get-togethers of suspected mobsters at a farmhouse in Castello di Brianza, northern Italy, with one recruit as young as 17.

The oath reminds the recruits that traitors are expected to kill themselves and to keep an extra bullet handy in case it comes to that.

Investigators didn’t explain how they managed to film at the ceremony. Prosecutors said it was the first time authorities have obtained video of an ‘ndrangheta initiation ritual. The same investigation led to 38 arrests. The probe concentrated on loans mobsters made to businesses in northern Italy and Switzerland that were unable to get credit otherwise.

In a separate intercepted phone call, one suspect says to tell someone reluctant to repay money: “I will cut his head off.'”

Milan prosecutor Ilda Boccassini said the video shows how “the force of tradition” helps the ‘ndrangheta, a global cocaine trafficking organization, to thrive.

Suspected mobsters are seen kissing each other on the cheek in greeting. The ‘ndrangheta, rooted in the southern Calabrian region, has spread north as it invested illicit revenues.

In another scene, four males huddle together as words of a loyalty oath are repeated.

“Right in this holy evening, in the silence of the night, under the light of the stars and under the splendor of the moon, I create the holy chain…the holy society,” one man says.