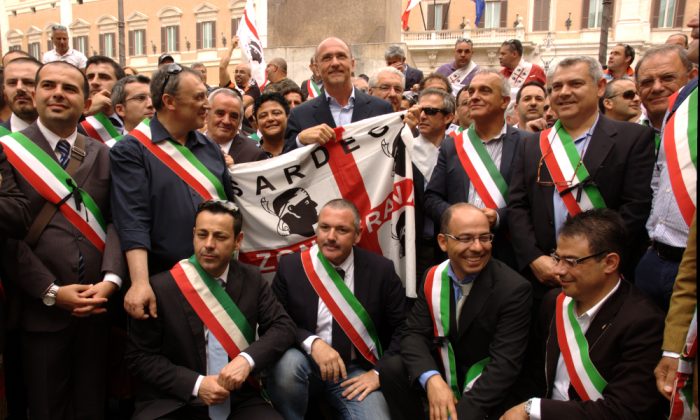 President of the Sardinian government Ugo Cappellacci (Center, holding flag) poses with Sardinian mayors to call for a free zone covering the island of Sardinia in front of the Italian parliament building on June 24, 2013. The island has become something of a poster child for the free zone economic solution to recession in Europe.(Andrea Lorini/Epoch Times)
Europe

Italian Island Wants to Break Away From Sinking Economy

ROME—If the 9,000-square-mile Italian island of Sardinia gets its way, it could become one of the world’s largest tax havens. As Italy struggles through years of recession, Sardinians look to resurrect the island’s economy by establishing an integral free zone (IFZ).

A free zone is an area in which companies are taxed lightly, usually limited to a port or a few towns. Sardinia seeks to establish an IFZ, which would give the entire territory the ability to determine its own tax regulations independent of the European and Italian parliaments. It would be outside of the European Union (EU) customs territory.

A Ministry of Finance official was reluctant to speak about the contentious issue that brought protesters to Rome and has politicians in a heated debate. Wishing to remain anonymous, he would not say much more than that establishing an IFZ will be difficult for Sardinia if it is possible at all.

As some European powers strive to combat tax havens, Sardinia asks for tax sovereignty and advantageous taxation. The island has become something of a poster child for the free zone economic solution to recession in Europe.

“We have reached a situation of despair that does not give us time to let loose,” said the mayor of the Sardinian town Golfo Aranci, Giuseppe Fasolino. “This is the only way to restart the economy of this island.”

This year, 300 Sardinian municipalities voted in favor of introducing free zones on the island, and many of them also voted in favor of an IFZ. IFZ supporters rest their hope on the pillar of Article 174 of the Lisbon Treaty of 2007.

Article 174 mandates the support of disadvantaged regions to maintain an equilibrium among EU territories. Sardinia claims itself as such a region, and claims establishing an IFZ is the way to reduce disparities.

Article 174 reads: “In particular, the Union shall aim at reducing disparities between the levels of development of the various regions and the backwardness of the least favoured regions. Among the regions concerned, particular attention shall be paid to rural areas, areas affected by industrial transition, and regions which suffer from severe and permanent natural or demographic handicaps such as the northernmost regions with very low population density and island, cross-border, and mountain regions.”

Some free zones, but not IFZs, will be approved for Italy in September—the municipalities of Livigno, Campione d’Italia, and Lugano. The establishment of a free zone requires making an exception to the European customs code. This requires the approval of the national government of the member state, the European Parliament, and the unanimous vote of the European Council.

So Sardinia has a few hoops to jump through.

While Article 174 of the Lisbon Treaty tries to close the gap in disparities between regions, the European customs code tries to avoid distortions in competition between member states. Sardinia must make the case that an IFZ supports the former and does not violate the latter.

A Path of Less Resistance?

A potentially less contentious route would be adding Sardinia—which has the second highest insularity index in the EU—to the list of ultra-peripheral regions (UPRs). The UPR list currently includes the French territories of Martinique, Guadeloupe, French Guyana, the Spanish Canary Islands, and more.

UPRs are within the customs territory of the EU, unlike free zones. The EU provides these regions with special fiscal and commercial policies to promote development, and with a larger portion of the European Regional Development Fund (ERDF)—the eight UPRs shared a 275 million euro ($360 million) ERDF pot for 2012.

UPRs are characterized by insularity, small size, an adverse climate and topography, and/or economic dependence on a few products.

But Ugo Cappellacci, Sardinian regional president, thinks the UPR option will meet with opposition from other areas vying for this status.

“There is a very strong lobby of lands that competes against us,” he said. “We are few in number. We are a weak territory, and thus there will be maneuvers tending to rule out this possibility.”

Cappellacci said Sardinia makes a good case for its “outstanding” situation requiring “outstanding measures to resolve it”: It has high costs for transport and energy, poor infrastructure, and dismal stats.

“We are also months without work, not days,” said Arrus Sergio, 59, an artisan decorator from the Sardinian village of Arzachena. Sergio attended the rally at the Italian parliament building in Rome on June 24, organized by the Sardinian regional government to voice support for an IFZ. “I had two, three employees, but [for] many years I have worked alone. I can’t go ahead alone,” he said.

“A business works well where there are people. We are in a continuous [state of] depopulation,” said Alberto Caviddu, 44, a building contractor from Talana, Sardinia, who was also at the rally. He said he favors the IFZ, because it “would slow depopulation and increase the creation of other enterprises.”

What worries most opponents of IFZ in Sardinia is the dead-weight loss of over 2.5 billion euros ($3.2 billion) in revenue from value-added tax (IVA) and excise duties, which they say could not be compensated by an equivalent increase in transactions subject to tax.

In this scenario, hospitals and other essential services financed by tax revenue could be impacted.

Giovanni Andrea Cornia, a professor of development economics at the University of Florence, weighed the risks: “Time is an important factor to evaluate in the cost-benefit analysis, because if we delete the IVA and excise duties, we have a net loss to the budget instantaneously—before everything comes back in motion and leads to greater economic activity resulting in increased income from personal income tax, it will take a little time.”

Sardinia’s regional president, Cappellacci, said, “The mechanism must be progressive and must be activated with a progression that makes it all possible and harmonious.”