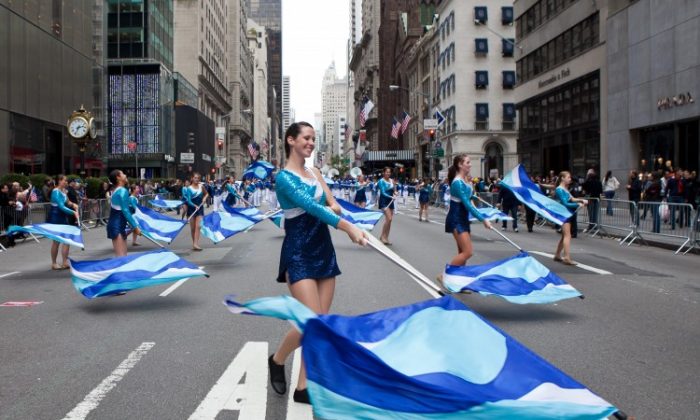 A girl performs at the Columbus Day Parade on Oct. 8, 2012 in New York City. (Amal Chen/The Epoch Times)
US

NEW YORK—Fifth Avenue was lined with Italian flags Monday for the Columbus Day Parade in Manhattan.

The annual event, hosted by the Columbus Citizens Foundation, boasted 1 million viewers and participants from more than 100 groups—some from overseas—making it the world’s biggest Italian-American celebration.

“This parade is a celebration of Columbus discovering America, but it’s also a celebration of Italian-American heritage and the contributions the Italian immigrants made to America,” said Lawrence Auriana, the foundation’s treasurer, amid the parade’s song and dance.

More than 35,000 participants marched from 44th Street to 72nd Street with music—ranging from high school marching bands, to NYPD bagpipes, to Italian Giglio bands—floats, and plenty of statues of Columbus.

Americans were not only thankful for Columbus’s discovery of the Americas, but also for what he brought with him.

“We’re celebrating Christopher Columbus and what all the millions of Americans of Italian descent brought to this country: love of country, love of family, love for God, and America,” said Peter Vallone, member of the Columbus Citizens Foundation and former City Council speaker.

“The most significant [thing] about Columbus Day is the connection Columbus made between Europe and North America, which is why we’re all here today, as Americans,” said Roberto Ferragina, president of the Amerigo Vespucci Society in New Jersey, an Italian society established in 1875.

Various groups brought statues depicting saints, which they carried through the procession.

“This is something that our families have done in Italy, brought from Italy, and we still do this,” said Mitch Farbman of the East Harlem Giglio Society.

Participants and viewers came from around the tri-state area and as far away as Italy for the celebratory events.

“We have extensive participation from Italy. From cities, from regions, and [some years] we have an Italian military band,” said Auriana.

Luca Dadon flew from Northern Italy to see the parade.

“We’re proud to be Italian,” he said, adding that he’ll be staying a week and does this yearly. “I think it’s good recognition to what Italians have done in the United States.”