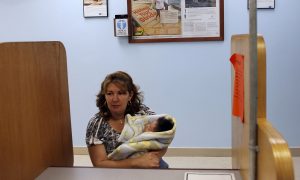 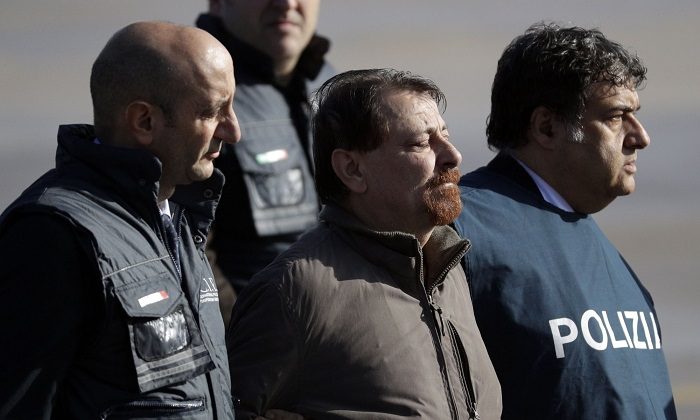 Italian fugitive Cesare Battisti arrives at Ciampino military airport, in Rome, on Jan. 14, 2019. Battisti a left-wing Italian militant who was convicted of murder three decades ago is heading home to serve a life sentence, after his life as a celebrity fugitive came to an abrupt end with his arrest in Bolivia by a team of Interpol agents. (Gregorio Borgia/AP Photo)
Europe

ROME—A left-wing Italian militant who was convicted of murder three decades ago arrived in Rome on Jan. 14, to begin serving life in prison, after his time as a celebrity fugitive came to an abrupt end with his arrest in Bolivia.

An Italian military aircraft carrying Cesare Battisti landed at Rome’s Ciampino airport shortly after 11:30 a.m. after an overnight flight from Bolivia. As snipers kept close watch, Battisti emerged and descended from the plane, surrounded by police.

Wearing a brown jacket, a look of resignation and no handcuffs, Battisti was escorted to an airport facility to be processed—a remarkably quick finale to one of Italy’s most drawn-out, politicized efforts to bring a fugitive home.

“All of the families, we waited for such a long time,” marveled Alberto Torregiani as he watched live television coverage of the arrival of the man convicted in the death of his father. “Seeing him come out of the airplane and in this moment is going to prison—it puts the word ‘end’ on this story.”

Battisti was arrested Saturday in Santa Cruz, Bolivia’s largest city, where he was located by intelligence agents after using one of his mobile devices. Italy sent an aircraft to pick him up and bring him back for the first time since he fled Italy in 1981 as he was awaiting trial.

The 64-year-old, who became a successful author during his life on the run, had lived openly in Brazil and France for years, enjoying the protection of left-wing governments on both sides of the Atlantic, much to the consternation of Italy.

But Brazil’s outgoing president signed a decree last month ordering his extradition. That apparently prompted Battisti to flee to Bolivia, where his request for political asylum was rejected on Dec. 26, five days after he made it, Bolivian officials said Monday.

Battisti escaped from an Italian prison while awaiting trial on four counts of murder allegedly committed when he was a member of the Armed Proletarians for Communism. He was convicted in absentia in 1990 and faces life in prison for the deaths of two police officers, a jeweler— Torregiani’s father, Pierluigi—and a butcher.

Battisti acknowledged membership in the militant group but denied killing anyone. He painted himself as a political refugee who would face certain torture or death in Italy.

After initially fleeing to Mexico, he then settled in France, where he joined dozens of left-wing Italian militants who enjoyed official protection from the French government.

Like Battisti, they fled Italy during its “years of lead,” a bloody, turbulent era during the 1970s and 1980s when militants on the left and right carried out bombings, assassinations, and other violent acts to try to bring down the Italian government.

After political winds shifted in France, Battisti fled to Brazil in 2004 to avoid being extradited. He was arrested in Rio de Janeiro in 2007, prompting the Italian government to request that he be handed over. But then Brazilian President Luiz Inacio Lula da Silva granted him political asylum in 2010.

Battisti was eventually released from jail but was arrested again in 2017 after he was caught trying to cross the Brazil-Bolivia border with about $7,500 in undeclared cash. He was released after a few days.

After that incident, the Brazilian supreme federal tribunal issued a warrant for Battisti’s arrest on tax evasion and money laundering charges. Outgoing Brazilian President Michel Temer signed the decree in December ordering the fugitive’s extradition, and Brazil’s new right-wing president, Jair Bolsonaro, vowed to follow through with it.

In the end, that wasn’t necessary, as Bolivian authorities handed Battisti directly over to Italian authorities, bypassing Brazil. That handoff will enable Italy to enforce the life sentence Battisti is due to serve. Under Brazilian law, people extradited to serve life sentences must have their sentences capped at 30 years.

“Today to the world, we say no one can escape Italian justice,” Justice Minister Alfonso Bonafede said from the airport tarmac after Battisti arrived, with Italy’s interior minister by his side.

As for Torregiani, he was still processing the remarkable 48 hours that ended the nearly four-decade hunt for the man convicted in his father’s death.

“It is not a question of how many years or months that someone stays in prison,” he told The Associated Press. “It is just important that he begins to serve that sentence that for so many years he was able to avoid.”