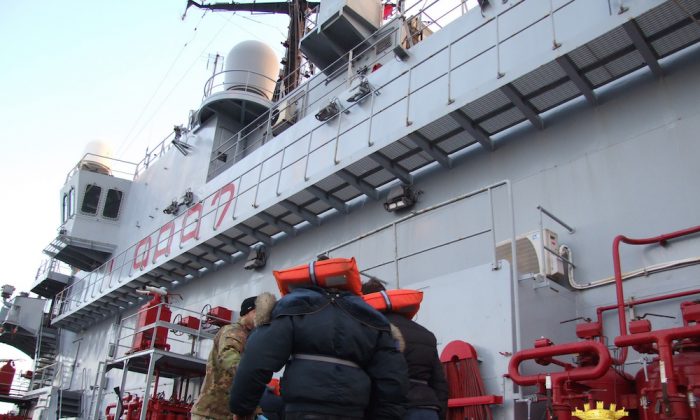 In this image released by the Italian Navy, passengers of the Italian-flagged Norman Atlantic, that caught fire in the Adriatic Sea, are rescued from the Italian Navy ship San Giorgio, on Dec. 29, 2014. (Italian Navy/AP Photo)
Europe

Italian Ferry With 250 on Board Has Problems in Adriatic

ZAGREB, Croatia—An Italian ferry carrying 250 passengers and 92 crew members experienced technical problems while on its way to the Croatian port of Split on the Adriatic coast.

The SNAV company’s office in Split said Thursday that mechanics onboard the Aurelia are doing everything to fix the problem and bring the passengers to shore.

The company gave no other details, but Croatian media reported that one of the ferry’s engines has malfunctioned and that the vessel has been drifting in the northern Adriatic. The reports said two tugboats have been sent toward the stranded ferry, which is about 10 nautical miles (11.5 statute miles) offshore from a cluster of islands in Croatia’s Kornati archipelago. Strong winds are hampering the operation, the reports said.

The reports quoted passengers as saying there was no panic among them.

The ferry was traveling from the Italian port of Ancona.

Croatia’s public broadcaster HRT says no damage or casualties have been reported. It says the ferry was due in Split around 0500 GMT (1 a.m. EDT) on Thursday.