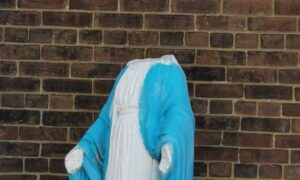 The incident occurred Monday morning while priests and church staff were praying inside, according to the Los Angeles Police Dept.

According to officials, the suspect threw red paint on the front windows and doors of the church, which was built in 1904.

Additionally, authorities said the suspect attempted to break into the church but failed.

The church was sprayed with red and black graffiti, including the phrase “LAND BACK.” Additionally, a banner that read: “STOP COLONIZING OUR LAND” was left at the church’s front steps.

Father Fernando Cuevas, who only recently joined the parish as a pastor, said he would pray and forgive whoever was involved in the incident.

“We pray for all the people who suffer discrimination and isolation, so that they can find peace in their hearts, and we can live in harmony and peace,” Cuevas said. “We forgive and look forward to having the strength to do God’s will.”

The National Italian American Foundation, a non-profit organization based in Washington D.C., condemned the vandalism and pledged $5,000 for its restoration.

The foundation recognizes Columbus Day as an “important and historic holiday for Italian Americans, the 5th largest ethnic group in the US. When Columbus Day became a federal holiday in 1937 it provided a sense of dignity in light of the hostility and discrimination many Italian immigrants & Italian Americans faced,” the organization posted on Twitter on Monday.

Columbus Day was first celebrated by Italian Americans to honor Christopher Columbus’s spirit of exploration. The date was meant to celebrate the anniversary of Columbus’s arrival in America.

Los Angeles City Councilmember Joe Buscaino, who is running for mayor of Los Angeles, is an Italian American and was the only councilmember to vote no.

Yesterday, Buscaino condemned the vandalism and said he hoped “those who committed these acts to a sacred place of worship will be found and prosecuted.”

“[Columbus Day] should be about celebrating our diversity and contributions to society, without the need for hatred or violence. We all need to work together, not breed division and hate with one another,” Busciano wrote on Facebook on Monday.