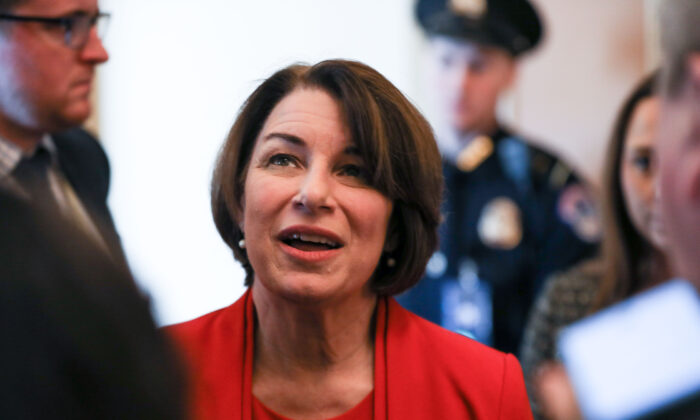 As Sen. Bernie Sanders (I-Vt.) gains steam en route to a delegate lead, calls for other Democratic presidential candidates to drop out of the race are being heard.

It would be foolish, however for the likes of Sen. Amy Klobuchar (D-Minn.) to drop out of the race. At a brokered convention, she would be a plausible alternative and dropping out now would only diminish her chances.

The Democrats’ 2020 race is rolling along in predictable fashion.

Presidential primaries place a premium on experience, i.e., prior presidential runs, and organization. Add to that, the new age of crowded presidential fields and that adds up to Sanders having the edge on his rivals. For those reasons and others, a year ago, I predicted that he would be the Democratic nominee.

A look at the upcoming primary polls shows Sanders in first or second place in every state except Florida. Importantly, he’s in first place in four of the largest states: New York, Texas, Michigan, and California. In California alone, which places the highest premium on organization, given its size, and where he has a massive polling lead, Bernie could get more than 10 percent of the delegates he needs for the nomination.

All is not well in Bernieland, though. The Democrat Establishment has declared open warfare on him. The Democrats don’t want him as the nominee and will do virtually anything to stop him, as they did in 2016.

If they do, however, it won’t be because someone else has enough delegates to secure the nomination prior to the convention. Indeed, there is virtually no way to stop Sanders from having the most delegates before the convention.

While he is either first or second in mostly every state, his competitors are left to divide up the rest of the vote and will fall far short of Sanders’s delegate haul. So, it’s Bernie or no one as far as getting enough delegates before the convention to win on the first ballot.

So, shouldn’t some of them drop out to save the Democrats from being burned by Bernie in the fall?

The short answer is no. Here’s why.

Given his delegate lead, the Democrats’ strategy to stop Sanders must be to force a brokered convention. Then, at the convention, after committed delegates vote on the first ballot at the convention and Sanders falls short of a majority, Party rules allow for an additional 500 delegates to weigh in.

That additional pool of delegates, known as superdelegates and made up of Establishment Democrats, will broker who will be the nominee—and you can bet that it won’t be Sanders.

So, who would it be?

The answer is it could be just about anyone from Hillary Clinton to Michael Bloomberg to Joe Biden to Klobuchar to Michelle Obama.

Bloomberg will tell Democrats that he will self-fund the race and they can spend all their money on congressional contests—a tempting proposition. Clinton will say she has the experience and the organization to run a presidential race. Michelle Obama could say she has the name, and Biden would say he is electable.

As for Klobuchar, she can tout her Midwest appeal and the fact that she ran a good race. She also can lay claim to being a new face on the block without the baggage of Hillary, Bloomberg, or Biden—or the inexperience of Michelle Obama.

To really make her case, however, Klobuchar needs to demonstrate that she has support across the country. To do that, she can’t drop out of the presidential race. She must rack up delegates whenever and wherever. Each committed delegate she gets is a bargaining chip that the other candidates won’t have. It also would place her in prime position to be the vice presidential nominee.

As for the other Democrats in the race, Pete Buttigieg and so on, they are in roughly the same boat but without Klobuchar’s semi-moderate appeal.

In sum, the Democrat nomination process remains totally up in the air. A difficult fight lies ahead for them. Giving up the fight for the nomination, however, would be a mistake for the candidates not named Bernie Sanders.