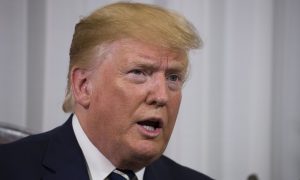 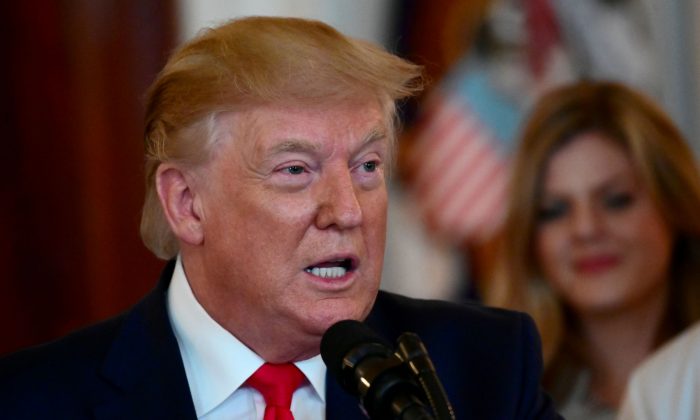 President Donald Trump speaks before signing an executive order aimed at requiring hospitals to be more transparent about prices before charging patients for healthcare services, at the White House in Washington, on June 24, 2019. (Reuters/Erin Scott/File Photo)
Trump Administration

As House Democrats wait eagerly to hear Robert Mueller testify on his findings from the Russia probe, after he previously said that he wouldn’t, President Donald Trump was asked to respond in a recent interview on June 26.

“It never ends,” Trump said during an interview with Fox Business Network’s “Mornings with Maria.”

Mueller is scheduled to testify in open session before the House Judiciary and Intelligence committees on July 17, the panels’ chairmen, Jerrold Nadler (D-N.Y.) and Adam Schiff (D-Calif.) announced on June 25. After the Mueller report was released in April, House Democrats have expended great effort to secure the former special counsel’s testimony in an attempt to gather evidence for impeachment.

During the June 26 interview, Trump sounded frustrated by House Democrats’ repeated attempts to weaponize the report against the president, despite it finding no collusion with Russia and insufficient evidence obstruction of justice by Trump during the probe.

“[T]he report is no collusion, no obstruction which was ruled on. I have fought through that and now I hear that Mueller is going to go yet again. I mean, how many times do we have to go through this stuff—five times?” Trump said.

“They got caught and they’re running around going wild trying to do everything they can, but they spied on my campaign, it’s as simple as that,” he also said, referencing a probe into the origins of the 2016 FBI counterintelligence probe.

“It’s so illegal, it’s probably the biggest political scandal in history and they got caught doing it,” he said.

The Justice Department is currently investigating the origins of the FBI probe into the Trump campaign as well as the FBI’s use of Foreign Intelligence Surveillance Act (FISA) warrants to spy on Trump campaign associate Carter Page.

Other key members of the Republican party also shared similar sentiments, calling the Mueller hearing an attempt by House Democrats to “harass” the president.

“[Mueller] has been courted by the other side just so that they can harass the president and keep on this narrative,” Rep. Mark Meadows (R-N.C.) told Fox News late June 25.

He also questioned whether the subpoena the House Democrats served to Mueller was valid.

“They broke House rules,” he said. “I’m not sure the subpoena is valid because you can’t issue the same subpoena from two different committees of jurisdiction.”

The North Carolina congressman added that Mueller “better be prepared” because he will be “cross-examined for the first time, and the American people will start to see the flaws in his report.”

Similarly, Sen. Lindsey Graham (R-S.C.) said that Mueller’s testimony will “blow up in their face.”

“Bottom line is, after all of your looking and all the time you had and all the money you spent, did Trump collude with the Russians? No. Do you stand by your report? Yes,” Graham told Sean Hannity on his program on June 26.

Graham: ‘This Will Blow Up in Their Faces’ https://t.co/DigXcgdwUt

“It is case closed for me. They can do anything they want to in the House, and I think it will blow up in their face,” Graham added. “The conclusions can’t change, there is no collusion, that’s what the whole thing was about to begin with.”

On June 25, Nadler and Schiff compelled Mueller, through a subpoena, to appear before Congress to testify on the findings of his report on the investigation into the alleged collusion between Russia and the Trump campaign to interfere with the 2016 presidential elections.

I am pleased to announce that @HouseJudiciary and House Intel will have Special Counsel Robert Mueller testify in open session on July 17, pursuant to a subpoena issued this evening. https://t.co/wR0CEVqpJC

We look forward to having Mr. Mueller testify, as do all Americans. pic.twitter.com/UEKihMEYXI

Nadler had previously said he was confident Mueller would agree to testify to Congress, while also floating the idea that a subpoena could be issued. Meanwhile, Mueller has shown reluctance to speak openly on the report. He had told the Democratic leader that he would only do it behind closed doors, something Democratic lawmakers thought was not sufficient, according to Nadler.

On May 29, Mueller appeared in a rare press conference at the Department of Justice to read a written statement saying he did not want to speak about the report.

Mueller’s more than 400-page report, which was released in late April, details how the special counsel concluded that there was no collusion between the Trump campaign and Russia to influence the 2016 presidential election. The special counsel also left Americans confused by staying silent on whether he would charge Trump with an obstruction of justice crime, and says he had not exonerated Trump or proven him innocent in the report.

Trump has repeatedly accused Democrats of wanting a “do-over” of Mueller’s report after they launched multiple investigations and subpoenaed a number of witnesses in hopes of gathering information that could be used to prepare for an impeachment proceeding.

On June 19, on the day of former press secretary Hope Hicks’s House Judiciary Committee closed-door hearing, Trump wrote on Twitter, “The Dems are very unhappy with the Mueller Report, so after almost 3 years, they want a Redo, or Do Over. This is extreme Presidential Harassment.”

“Why aren’t the Dems looking at the 33,000 Emails that Hillary and her lawyer deleted and acid washed AFTER GETTING A SUBPOENA FROM CONGRESS? That is real Obstruction that the Dems want no part of because their hearings are RIGGED and a disgrace to our Country!” he added.

Correction: An earlier version of this article incorrectly stated the date of Hope Hicks’s House Judiciary Committee closed-door hearing. The correct date is June 19, 2019. The Epoch Times regrets the error.