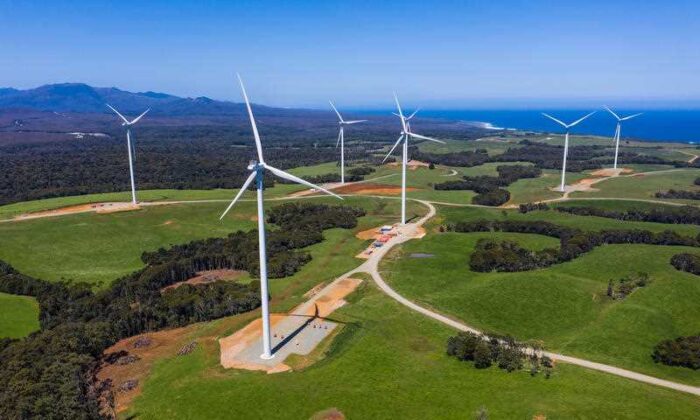 The president of a Victorian community group says a recent court decision that refused his group leave to appeal a planning permit extension for a wind farm in his township doesn’t change his or his group’s position on the issue.

“We have been doing an uphill battle over a number of years, trying to ensure that we get the best possible outcome for the town [of Hawkesdale],” John Bos, president of the People of the Small Town of Hawkesdale Incorporated, told The Epoch Times during a phone call on Aug. 19—a day after an unsuccessful appeal in the Victorian Court of Appeal.

“It doesn’t change what it means to us … the proximity of a wind farm on two sides, 1.5 kilometres from the town, is obviously going to be detrimental to the town—it will be detrimental,” Bos said.

Among the concerns expressed by Bos were wildlife and noise impacts on the area.

“We’ve got birdlife there, we’ve got wildlife, there are various other birds, and that will be impacted by the wind farm, both on a noise and impact related matter,” Bos said.

Covering approximately 2,280 hectares and 23 turbines, the proposed Hawkesdale Wind Farm is located in southwestern Victoria near the township of Hawkesdale, which is part of Moyne. Hawkesdale has a population of 311 people, according to data from the Australian Bureau of Statistics (ABS).

The permit to build the wind farm was first granted to Global Power Generation Australia and Hawkesdale Asset in 2008. This permit allowed the construction of up to 31 wind turbines, each with a maximum height of 121.5 metres.

Then in 2017, the Victorian planning minister extended the permit to reduce the maximum number of wind turbines to 26 while increasing the maximum height of the turbines to 180 metres.

The permit was again extended from November 2020 to August 2023 after little-to-no work was completed.

Bos said his group—an association he said is currently made up of 25 members—believed that the permit extension was “invalid.”

“It was required that to extend the permit, the wind farm company had to get the signatures of all the hosts that owned the land on which this wind farm was going to be built. In this case, that was four different farmers. Now, they didn’t get the signatures,” Bos said.

Bos’s group also argued that the extension was an error of law, according to the August 2021 judgment.

Under Section 69 of Victoria’s Planning and Environment Act 1987, the permit was “incapable of being extended” because no application for extension had been made by the land’s owner or occupier.

The Victorian planning minister has been approached for comment.

Moyne Shire Council was also approached for comment but deferred questions related to the permit to the Minister for Planning.

In her judgment in August 2021, Supreme Court Justice Melinda Richards said that condition 64 was a “valid source of an alternative power to extend the permit” and supported the extension decision independently of section 69 of the Planning Act.

“That’s what brought us through to this appeal,” Bos said.

Further, Justice Richards deemed Bos’s group to have no legal standing in the matter.

While individual members of People of the Small Town of Hawkesdale Incorporated had “special interest” in opposing the construction of the wind farm, the court determined that there was “no evidence” that the Association had ever actively represented its members or anyone else.

Additionally, Bos’s group was formed after the extension decision was made.

“The plain fact is that the members of the Association came together ‘as a group to invoke the court’s protection to challenge the Minister’s Decision and share legal costs. In other words, the Association was formed in order to be a vehicle for this litigation,” Justice Richards said in her judgment in August 2021.

“I conclude that the Association does not have standing to seek judicial review of the Extension Decision. The objects of the Association and the interests of at least some of its members in opposing the construction of the wind farm do not amount to a special interest on the part of the Association in the subject matter of the proceeding.”

“I think federally they’re saying because this is a national [issue], and energy is something that is essential, and [they’re] taking the position that [they] can do as [they] please.

Additionally, Bos told The Epoch Times that his group were “sceptical about the noise evaluations” that were carried out by the noise testing company.

“[W]e have been unable to get the raw data to see how that was tested,” Bos said.

“Not one, not one testing site encompassed any part of the township of Hawkesdale. That was another problem that we had. So we can’t do anything about that because they’re doing it by the book. But the book is not correct.”

“I would say that out of the people who are going to try and live here long term, being their home for the long term, that one hundred percent of them worried—at least about what this wind farm is going to do,” he said.

“And those that are more enlightened and sort of in with what’s going on at the moment, I’d say all of them are worried about what’s going to happen.”

In a statement to The Epoch Times, Global Power Generation (GPG) said it was “pleased with the decision of the Court of Appeal” and that it will continue to work with the community and stakeholders on this project.

The People of the Small Town of Hawkesdale were ordered to pay the costs of the planning minister, Global Power Generation Australia and Hawkesdale Asset. The Supreme Court will make a ruling on legal expenses at a later date.