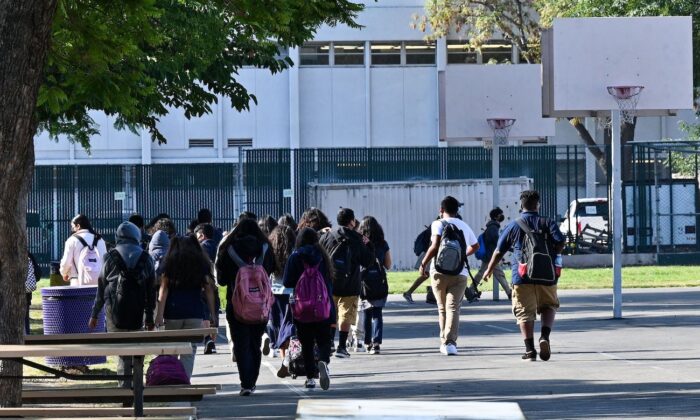 Students walk to their classrooms at a public middle school in Los Angeles on Sept. 10, 2021. (Robyn Beck/AFP via Getty Images)
Viewpoints

It Began in Academia

It was sometime in the 1990s that academics fell in love with the idea of transgression. Not actual transgression, but the topic, the concept, the theory of it.

Most professors lead bourgeois lives, teaching classes, doing some research, worrying about money and housing, and promotion. They may fancy themselves daringly progressive now and then, but a bohemian life of genuine transgression wouldn’t let them continue as steady employees of an institution as hierarchical, regulated, and conformist as higher education is. For most of them, transgression is something to analyze and discuss, not to do.

And analyze and discuss they have, starting in the last decade of the last millennium. I just checked the Modern Language Association International Bibliography for the years 1970–79 and found that the word “transgression” appeared in the titles of books, articles, reviews, and whatnot in literary studies only 33 times. The word had no special disciplinary meaning.

From 2000 to 2009, however, it popped up in the title of fully 1,138 items of literary scholarship. It was a central term of gender theory, and it had a political dimension as well (if “the personal is political,” as the slogan went, then small transgressions in private affairs could count as forms of political protest). The high priest of theory in the 1990s, Michel Foucault, characterized modern transgression as acts of profanation in a world with no sense of the sacred.

In that way, he said, transgression rehearsed the death of God. Small acts could be world-shaking—that was the implication. It elevated gestures contrary to conventional morality and deportment into grand critiques, and academics ate it up.

To be gay wasn’t just to feel desire for the same sex, then. It struck a blow against heteronormativity. A wife straying into adultery broke her vows, yes, but she also broke free of the patriarchal institution of bourgeois marriage. Transgression was liberation—it was good. The academics said so, just as in former ages when writers and artists glamorized the highwayman and the bank robber.

The main difference was that this time, the violation usually had a sexual core (Foucault singled out sexuality as the most delicate and monitored area of human behavior in a secular time). It went along nicely with the Sexual Revolution, with Women’s Lib and Gay Liberation.

Academics intellectualized and valorized it. They wrote books such as “Chastity and Transgression in Women’s Writing, 1792–1897.” This was a nice tack by professionals in higher education to show that they could be just as edgy and titillating and experimental as were the radical and motley characters who gathered around Andy Warhol at The Factory in the ’60s.

I bring this up in order to let readers know that the current controversy over sexuality in elementary school classrooms has a context that’s obscure to the American public. People are shocked at the TikTok videos created by teachers who boast of their introduction of sexual materials in classrooms and their glee at hiding them from parents. (See the many postings by Libs of TikTok on Twitter.) They don’t see why any questions about gender fluidity should come up in second grade. When Florida passes the bill to keep sex issues out of K–3 classrooms, they can’t believe Disney opposes it.

What they don’t know is that these forms of transgression have been authorized for three decades by humanities teachers at the college level. Elementary school instructors under 40 years of age got their liberal arts formation after transgressive gender and sexuality issues had become central learning goals in the fields. People behind gender curricular units for kids were taught to think this way about crossing boundaries. The whole idea of “age-appropriate” was precisely one of those old-fashioned limits that one was supposed to transgress.

Listen to the defenders of sex in lower grades speak and you can hear in their voices a righteousness that comes from years of indoctrination. By 2010, nobody would dare to stand up in a humanities seminar and defend a biblical conception of sexuality. To speak of protecting the innocence of children was to fall into a camp of alarmists and puritans. In this upside-down world, transgression had become the conventional position. To transgress the old ways of men and women was dogma.

Don’t mistake the current controversy as fresh and new. It has ripened for decades, starting in the foggy heights of academic theory, drifting into graduate and undergraduate classes, and carried by young teachers into secondary and primary teaching units. This has been a long time coming. What happened in the crazier zones of the campus in 1990 has ended up in the mainstream of educational practice in 2022.