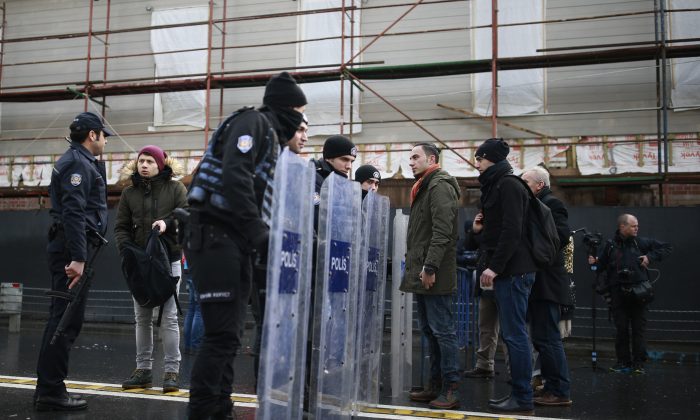 Turkish police officers block the road leading to the scene of an attack in Istanbul, on Jan. 1, 2017. (AP Photo/Emrah Gurel)
International

ISTANBUL—A gunman who killed 39 people during an attack on a nightclub in Istanbul during New Year’s celebrations has been caught in a police operation, Turkish media reports said early Tuesday.

The suspect was caught in a special operations police raid on a house in a housing complex in Istanbul’s Esenyurt district, private NTV television said. The report said he had been staying in the house belonging to a Kyrgyz friend.

The ISIS terrorist group has claimed responsibility for the nightclub massacre, saying the attack was in reprisal for Turkish military operations in northern Syria. The man identified as the suspect had been on the run since the attack.

Hurriyet newspaper and other media have identified the gunman as Abdulkadir Masharipov, an Uzbek national. The suspect was to undergo medical checks before being taken to a police headquarters for questioning, the paper said in its online edition.

Dogan news agency published what it said was the first image of the attacker. It showed a bruised, black-haired man in a grey, bloodied shirt being held by his neck. Private NTV television said the gunman had resisted arrest.