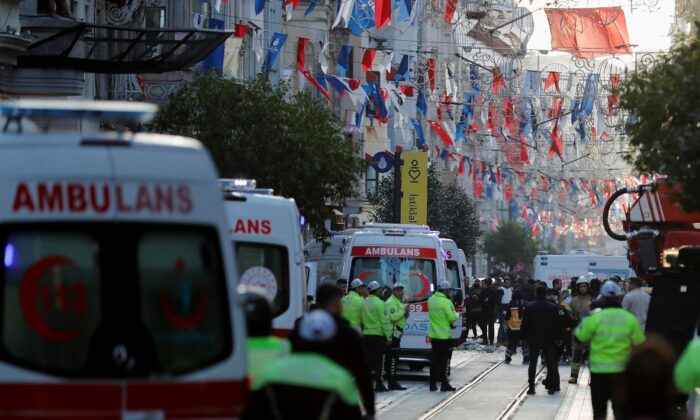 Police work at the scene after an explosion on busy Istiklal Avenue in Istanbul, Turkey, on Nov. 13, 2022. (Kemal slan/Reuters)
By Adam Morrow

In a sign of strained ties between Turkey and the United States, Turkish officials declined to accept Washington’s condolences after a deadly bombing in the heart of Istanbul that left six people dead on Nov. 13.

According to Turkish authorities, who swiftly detained the alleged bomber, the attack was planned and carried out by the Kurdistan Workers’ Party (PKK) and its Syrian offshoot, the People’s Protection Units (YPG).

Turkey, along with the United States and the European Union, considers the PKK a terrorist group.

Yet despite the PKK’s close affiliation with the YPG, the latter enjoys the support of Washington, which continues to use it as a bulwark against the ISIS terrorist group in Syria.

“U.S. support allows the terrorist group to carry out these kinds of attacks,” he said. “This is the main reason for the ongoing tension between the United States and Turkey.”

The PKK, for its part, has denied any involvement in the Istanbul bombing.

“It is out of the question for us to target civilians in any way,” the group said in a Nov. 14 statement published on its website.

On the morning of Nov. 13, Istanbul’s centrally located Istiklal Avenue was rocked by a powerful explosion that left six people dead and another 81 injured.

Located in Istanbul’s upscale Beyoglu district, the popular thoroughfare was teeming with tourists and shoppers at the time of the blast.

“Istiklal Street is a celebrated tourist spot; a place where vacationers and young people are known to congregate,” Agar said.

“This attack specifically targeted Turkey’s tourism industry, which is a pillar of the national economy.”

“The bombing was also most likely intended to undermine Turkey’s diplomatic reputation,” he said.

Within hours of the attack, Turkey’s Interior Ministry announced that the alleged perpetrator—Ahlam al-Bashir, a 23-year-old Syrian woman—had been arrested and was being questioned.

The authorities also released camera footage that they say clearly shows al-Bashir receiving a package from an unidentified man in Istanbul’s nearby Taksim Square.

Shortly afterward, she can be seen placing the package on a bench on Istiklal Avenue.

Minutes later, the package explodes, engulfing the area in flames.

Speaking to reporters the following day near the scene of the blast, Interior Minister Suleyman Soylu said dozens of other individuals had since been detained in connection with the attack.

Soylu asserted that, “according to findings,” those responsible for the deadly bombing were linked to the PKK and the YPG.

According to the minister, the attack was directed from the majority-Kurdish city of Kobani, located in northern Syria to the immediate south of the Turkish border.

Soylu also said the alleged bomber had passed through Syria’s northern city of Afrin while on her way to Turkey.

According to Agar, Turkey is plagued by “frequent attacks and infiltrations by YPG/PKK terrorists” along its roughly 560-mile border with Syria.

Since 2016, the Turkish armed forces have carried out three major offensives into northern Syria with the stated aim of protecting the Turkish border from attacks by the PKK and YPG.

The PKK was founded in the late 1970s. Currently based in northern Iraq’s Qandil Mountain Range, the group claims to seek the establishment of an independent Kurdish state.

Over the past four decades, the PKK has staged numerous attacks—on both military and civilian targets—inside Turkish territory.

In the immediate wake of the Istanbul bombing, foreign governments and multilateral organizations issued statements condemning the attack and extending their condolences to Turkey.

Statements to this effect were issued by the European Union, the Gulf Cooperation Council, and the Organization of Islamic Cooperation, among others.

The NATO alliance, of which Turkey has been a member since 1952, also voiced its condemnation of the attack, along with dozens of foreign capitals.

Washington was no exception.

“Our thoughts are with those who were injured and our deepest condolences go to those who lost loved ones,” read a statement delivered by White House press secretary Karine Jean-Pierre.

“We stand shoulder-to-shoulder with our NATO ally Turkey in countering terrorism,” the statement added.

But on Nov. 14, Soylu responded to the White House statement by voicing Turkey’s rejection of Washington’s note of condolence.

“This message of condolence should be interpreted as ‘the killer always revisits the scene of the crime,’” the minister was quoted as saying by the Turkish press.

“The support of our so-called allies for terrorists, by either hiding them in their countries, giving them a lifeline in the areas they occupy, or by funding them … is blatant insincerity.”

On Nov. 15, Erdogan met U.S. President Joe Biden on the sidelines of a G-20 summit in Bali, Indonesia, where the latter reportedly reiterated his country’s condolences for the deadly attack in Istanbul.

It remains unclear how Erdogan responded to the reconciliatory gesture by his U.S. counterpart.

But in a subsequent message posted on Twitter, the Turkish president expressed his “heartfelt gratitude” to the dozens of countries and organizations that sent notes of condolence after the bombing.

While Erdogan’s tweet didn’t explicitly mention the United States, it was accompanied by an image of the American flag.

Nevertheless, according to Agar, the episode served to highlight the ongoing tension between Ankara and Washington, especially as it pertains to the latter’s continued support for the YPG.

“How can the United States support a terrorist group that attacks and harasses the border of a fellow NATO member?” he asked.

“Washington’s persistent support for the YPG has led to an enormous crisis of confidence.”