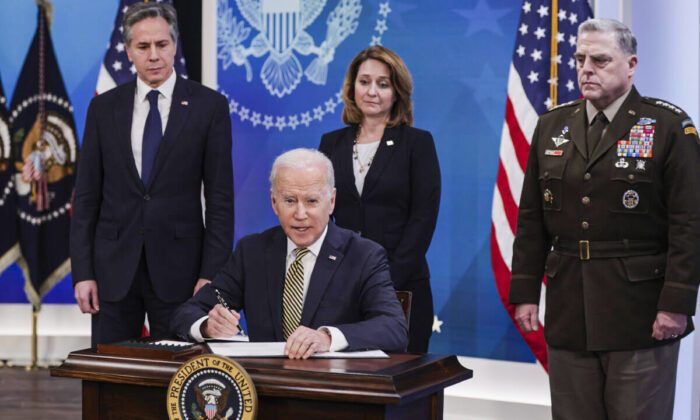 President Joe Biden signs legislative action to provide security aid and support to Ukraine as Secretary of State Antony Blinken (L), Deputy Secretary of Defense Kathleen Hicks, and Chairman of the Joint Chiefs of Staff General Mark Milley look on, during an event in the South Court Auditorium at the Eisenhower Executive Office Building near the White House in Washington, on March 16, 2022. (Alex Wong/Getty Images)
Viewpoints

Issues Related to US Support for Ukraine

Fifty years ago, as a fresh college graduate, I tried to understand the whys and wherefores of the Vietnam War. Today, I’m grappling with similar questions about the American role in Ukraine. Let me start by expressing gratitude for a major difference: U.S. troops are not dying on Ukrainian territory.

The first question (and let me say up front that I don’t pretend to have “the right answer”) is: Should we have gotten involved in the conflict by helping to arm the Ukrainian resistance to the Russian invasion? This question points to two strains of thought about American involvement in global geopolitics—the realistic and the idealistic.

The realistic school of thought holds that the founders devised a constitution that established a government tasked with keeping Americans safe, but not to provide defense or protection for people in other countries. This worldview later became known as “America First.” Many American ancestors migrated to this land to escape the wars and destruction that plagued the Old World. American Firsters acknowledge that the world can be a nasty and brutal place, and that foreign states periodically initiate cruel aggressions, but that each country should fend for itself.

At the same time, Americans have always despised bullies, tyrants, and genocidal regimes. Over one hundred years ago, we essentially jettisoned the Monroe Doctrine—the “spheres of influence” paradigm by which we told European powers not to meddle in this hemisphere and, in turn, we would stay out of their conflicts. American idealism embraced and promoted democratic values, national sovereignty and self-determination, and universal human rights. We entered into two world wars animated by those values.

In regard to Ukraine, realists have taken the position that there’s so much corruption in Ukraine that we should have left them to their fate, however grisly. Idealists—even ones who concede the problem of corruption in Ukraine (and who sometimes point out that politics is often corrupt, and that America is tainted with its own share of corruption)—believe that no matter how corrupt various political actors may be, the people of Ukraine cannot in good conscience be abandoned to genocide. The innocent should not have to pay for the crimes of the guilty.

Despite protestations of European unity and solidarity with Ukraine, the reality is that U.S. aid plays an indispensable role in helping Ukrainian forces withstand the Russian onslaught. It will be interesting to see how Germany, for example, balances realism and idealism in the months ahead. Will they contribute more than token military aid, or are they more concerned about losing access to Russian gas. I’m sure the German people don’t approve of genocide, but are they willing to suffer depression to help avert genocide in Ukraine? Are the German people willing to endure a shivering winter and shuttered homes to keep Ukraine from being annihilated? Stay tuned.

And what are we to make of Finland and Sweden hastening to join NATO? With Vladimir Putin demonstrating a willingness to invade neighboring countries, the Finns and Swedes are taking the no-brainer course of action. Joining NATO makes the United States treaty-bound to come to their defense, and who has sufficient military might to defeat Russia in a war other than the United States?

The actions of Germany, Finland, Sweden, and others raise an important question: Are our European allies going to pull their own weight, or will we have a continuation of the free-rider problem—European countries under-investing in defense and holding back on aid promised to Ukraine because of American generosity and the security that Europeans feel under the American protective shield?

We read that American weaponry such as Stingers and Javelins have helped the Ukrainians fight back effectively against the Russian army. But those weapons are coming out of storage and, to the best of my knowledge, there is currently no production line that can replace those that are used up. I have read that President Joe Biden is trying to revive production of these or similar weapons, but one wonders when that can be accomplished. It surely will be a grim day in Ukraine if the current inventory is exhausted before additional units can be manufactured.

Biden states that the United States will support Ukraine for as long as it takes to defeat the Russian forces in Ukraine. One wonders, when recalling the inept and abrupt withdrawal of U.S. forces from Afghanistan last year, whether Biden really means it. If he does, then our commitment to Ukraine is going to drag on for a long time. As historian Paul Kengor has written, Russia has a long history of seeing its troops die in massive numbers on the battlefield. Russians seem to accept death and suffering as their fate. It’s almost as if it’s in their DNA. Just watch Russian playwright Anton Chekhov’s drama and see how the atmosphere of fatalism engulfs the characters: Woe is me, we’re Russians, we’re doomed and damned.

What this fatalism translates to in Ukraine today is that Russia is likely willing to absorb far more casualties than any of us can imagine rather than to call off its aggression and voluntarily retreat to Russian territory. That dark, grim Russian mentality means that the United States basically has two options: (1) stop supplying the Ukrainians with needed weaponry and other forms of assistance so that the Ukrainian resistance is crushed and the Russian vulture picks the bones of a decimated Ukrainian carcass; or (2) continue to help Ukrainian forces kill Russian troops until there are no Russian troops left in Ukraine. What a depressing choice: Either way, a lot more people are going to get killed.

As an economist, I have asked myself if the United States can afford to support Ukraine. The dollar amounts—so far—are relatively smallish by Washington standards (the U.S. Senate just rushed a $250 billion pork barrel to passage), but you never know which straw will break the camel’s back. I think the more interesting speculation is what will be the comparative fate of the American and Russian currencies. The dollar has rallied strongly in recent months. That isn’t because of a financially sound government fisc. Quite the contrary, at $30 trillion and counting, federal finance is in a deplorable state. It’s just that with European countries facing economic weakness and showing themselves to be largely helpless and dependent on the United States for its survival, the dollar is comparatively attractive. And yet, since invading Ukraine, the Russian ruble has appreciated more than the dollar. If the Russian government manages to peg its currency to gold, oil, or some other commodity, it may end up being able to successfully compete on global markets against our fiat currency, backed as it is by nothing more substantial than the full faith and credit of a hyper-indebted, essentially bankrupt government.

Then there are the sanctions. Biden has expressed confidence that sanctions will hurt Russia and contribute to its defeat in Ukraine. Well, maybe. The problem with sanctions is that the resulting economic pain from cutting off commerce is that both sides share the pain. Again, when we remember how accepting Russians seem to be about accepting suffering, it could be that European countries sustaining a 5 percent decline in GDP will experience more rancor and protest against their governments than Russia might experience even with a 15 percent GDP decline. Note: That’s not a prediction, just a possibility to consider.

Bottom line: We can expect much more pain—both military and economic—emanating from the conflict in Ukraine in the months ahead. As is the grim reality of war in general, coming out ahead may boil down to which side can endure the most pain. How awful. How tragic. How sad.