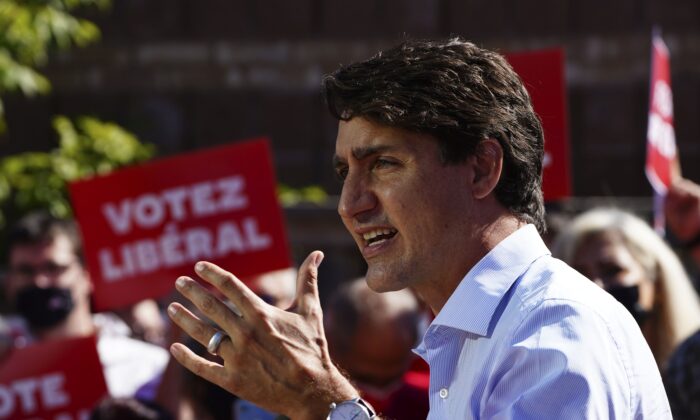 Inflation, Productivity Discussion Absent in ‘Most Important Election Since 1945’

In “The Hitchhiker’s Guide to the Galaxy,” a fleet of Vogon spaceships arrives to demolish the Earth to make way for a hyperspace bypass and is totally missed by all of the sophisticated radars. The Vogons “went unnoticed at Goonhilly, they passed over Cape Canaveral without a blip, Woomera and Jodrell Bank looked straight through them—which was a pity because it was exactly the sort of thing they’d been looking for all these years.” Kind of like a Canadian federal election.

As you might recall, when he called the 2021 election about nothing, Justin Trudeau emitted verbiage purple even by his standards. He called the vote “maybe the most important since 1945 and certainly in our lifetimes” and claimed that “the decisions your government makes right now will define the future your kids and grandkids will grow up in.”

Now the latter seems vainglorious, since politics and government are not generally that important. Though it is true that sufficiently major government blunders can have disastrous consequences lasting generations, like neglecting national defence and getting conquered by Vikings or Stalin. One also wonders, since he’d held power for six years, what decisions he’d been making right then, instead of the mega-important ones he’d make immediately after the vote. However, what really matters is that the two parts of that quotation do not connect.

Even if governments were making, or contemplating, decisions of long-lasting importance, good or bad, it could still be false that the election mattered if those decisions were not being debated by the “ins” or “outs.” Which, at the risk of making myself as popular as Vogon poetry, is exactly what happened.

We now face an economic crisis whose most obvious manifestation is accelerating inflation. But while inflation is, as Milton Friedman said, “always and everywhere a monetary phenomenon,” the predictable result of too much money chasing too few goods and services due in this case to the so-called “quantitative easing” since 2008, we also need to think about why governments might find themselves running the presses flat out. Nothing was said about it during the campaign.

As Friedman’s fellow economics Nobel Laureate Friedrich Hayek warned nearly a century ago, “to aim at the maximum of employment which can be achieved in the short run by means of monetary policy is essentially the policy of the desperado who has nothing to lose and everything to gain from a short breathing space.”

So why would a man thinking about defining the future our grandkids grow up in adopt the policy of a desperado? What does he gain from a short breathing space? Not even a majority, it turned out. And again, not a word from anyone during the election.

Arguably the PM is a short-term thinker partly by disposition and partly because he has no articulated principles on which he might attempt to think long term. But what of the Opposition?

Erin O’Toole’s cunning plan to win in the outskirts of Toronto, Montreal, and Vancouver was rendered easier by his lack of weighty principles to heft over the side along with his rural western supporters. But his failure to run an articulate, idea-based campaign was a strategic as well as tactical disaster because his party is not now well placed to take even partisan advantage of the policy shambles engulfing a prime minister who during the campaign sneered, “You’ll forgive me if I don’t think about monetary policy.”

I won’t. And neither should you. Nor should we forgive Jagmeet Singh, Yves-François Blanchet, or even Annamie Paul. As for Maxime Bernier, the great and good did their best to make sure he didn’t debate anything, but he’s on record, 11 years ago, noting that “the effects of constantly creating new money out of thin air have been a debasement of our money and a dramatic increase in prices.” So it was foreseeable.

So was the probability that governments would turn monetary desperado because they failed to focus on productivity. Or worse, they did it backward, hammering their economies with more regulations, subsidies, and planning instead of freeing up markets to innovate and create wealth, then piled on a “Green New Deal” to demolish the reliable, affordable energy on which our way of life depends.

Here the Tory brain trust, if it’s the right phrase, was obsessed with winning eastern Canadian suburban voters by pricing their gasoline and heating out of reach, just like every other party except, again, the much-despised People’s Party of Canada. The Conservatives in particular had an opportunity to debate something really important, indeed several interlocking things, from ill-advised climate policy to ill-advised monetary policy to reflexive and snobbish disdain or even hostility to entrepreneurship. And they didn’t.

Which is a pity because it was exactly the sort of thing they’d been looking for all these years.