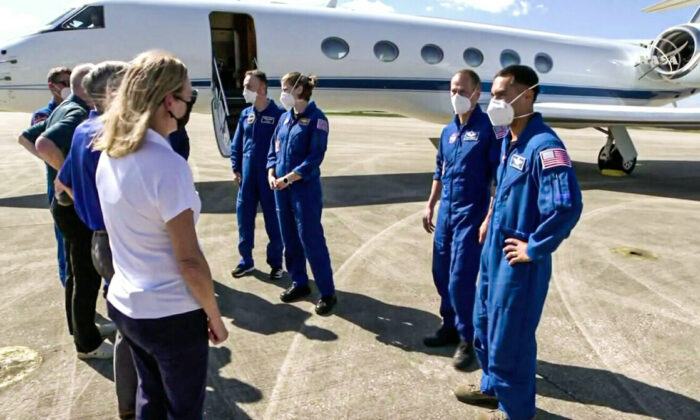 SpaceX Crew-3 members meet with staff in Cape Canaveral, Fla., on Oct. 26, 2021. (NASA via AP/Screenshot via The Epoch Times)
Space

It’ll be the fourth time NASA has sent astronauts to the ISS using SpaceX’s Dragon capsule.

The four are expected to spend six months in orbit, playing host to an assortment of civilian space tourists during their stay.

“I think they’re all pioneers, they’re taking risks. And as a result, they’re expanding the boundaries for what humans can do,” says NASA astronaut Tom Marshburn, who’ll be acting as pilot on the mission.

“One of these days, we can’t just have highly selected folks who train for years to go into space, we do want the situation where people can buy a ticket and go.”

This will be SpaceX’s fourth launch of NASA astronauts and its fifth passenger flight overall.

NASA turned to SpaceX and Boeing to transport crews to and from the space station, following the retirement of the shuttle fleet in 2011.

Boeing has yet to launch anyone. A repeat test flight of its Starliner capsule, without a crew, won’t happen until next year because of valve trouble.

Crew-3 also includes two astronauts that may one day set foot on the Moon.

In late 2020, both commander Raja Chari and mission specialist Kayla Barron were named among 18 astronauts who will train for NASA’s Artemis moon-landing program.

“Trying to imagine just standing there in a space suit, looking back at planet Earth just kind of blows your mind. And I think for most of us, we channel that energy into excitement that it could actually be possible for us to return to the Moon and return to stay,” says Barron.

“For me, I think what I’m excited about Artemis is not just to go and come back, but to go and stay. And I think that’s, for a lot of us, that’s been really the goal from the beginning is to continue moving human presence out, to continue pushing humans and machines further and further off the planet,” adds Chari.

The launch will be a first for German astronaut Matthias Maurer.

Once he launches atop SpaceX’s Falcon rocket, Maurer will become the 600th person in space, according to NASA statistics.

As is tradition for European astronauts, Maurer will be bringing food from his home country for space station residents to enjoy.

The choice? Not apple strudel, but a venison ragu from where he grew up in south-western Germany.

“It’s a local specialty and it has a potato soup with it. And a dessert comes afterwards,” explains Maurer.

“So, it’ll be a splendid dish, but I will also offer to my crewmates in space just to show them like what we eat back home and to give them a little bit of European flavor.”