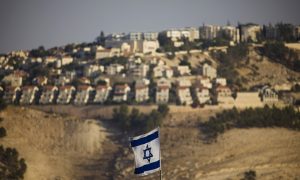 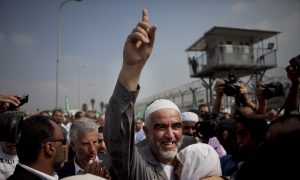 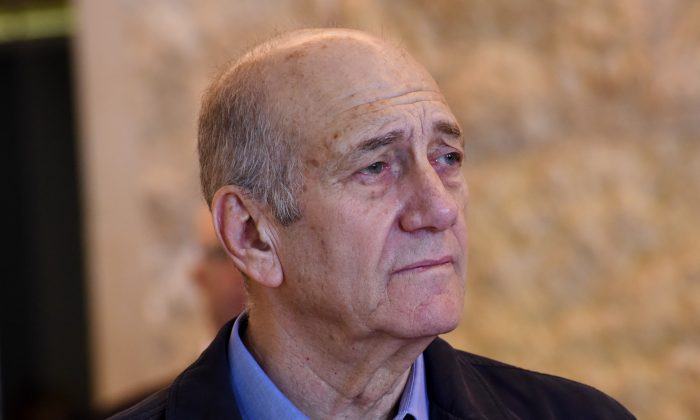 Former Israeli Prime Minister Ehud Olmert leaves the courtroom of the Supreme Court after the court ruled on his appeal in the Holyland corruption case in Jerusalem on Tuesday, Dec. 29, 2015. (Debbie Hill/Pool Photo via AP)
Middle East

JERUSALEM—Former Prime Minister Ehud Olmert, who claimed to be on the cusp of a historic peace deal with the Palestinians just a few years ago, now is set to become the first Israeli leader to go to prison after the Supreme Court upheld a bribery conviction against him Tuesday, Dec. 29.

The decision capped a seven-year legal saga that severely undermined the last serious round of peace talks and propelled hard-line Prime Minister Benjamin Netanyahu to power.

In some ways, Tuesday’s decision was a success for Olmert. The five-judge panel dismissed the most serious bribery charge against him and reduced his original prison sentence from six years down to 18 months. He is set to report to prison on Feb. 15.

“A stone has been lifted from my heart,” a visibly relieved Olmert told reporters. “I said in the past, I was never offered and I never took a bribe. And I say that again today.”

But it nonetheless served as a reminder of what might have been had he managed to complete his term before the scandal forced him to step down in early 2009.

Olmert was a longtime fixture in Israel’s hawkish right wing when he began taking a dramatically more conciliatory line toward the Palestinians as deputy prime minister a decade ago. He played a leading role in Israel’s withdrawal from the Gaza Strip in 2005.

Olmert broke a series of taboos while in office—warning that Israel could become like apartheid South Africa if it continued its occupation.

He became prime minister in January 2006 after then-Prime Minister Ariel Sharon suffered a debilitating stroke—and subsequently led their newly formed Kadima Party to victory in parliamentary elections on a platform of pushing further peace moves with the Palestinians.

In a recent interview broadcast on Channel 10 TV, Olmert said his political transformation began while he was mayor of Jerusalem during the 1990s and early 2000s. He said the wide gaps between the city’s Jewish and Arab neighborhoods led him to conclude that the continued occupation of millions of Palestinians was unsustainable.

A gifted orator, Olmert broke a series of taboos while in office—warning that Israel could become like apartheid South Africa if it continued its occupation and expressing readiness to relinquish control of parts of the holy city of Jerusalem under a peace deal.

He led his government to the Annapolis peace conference in November 2007—launching more than a year of ambitious, but unsuccessful U.S.-brokered peace talks with the Palestinians. Olmert enjoyed a warm relationship with then-President George W. Bush.

Olmert has said he made unprecedented concessions to the Palestinians during those talks—including a near-total withdrawal from the West Bank and an offer to place Jerusalem’s Old City under international control—and was close to reaching an agreement at the time of his resignation.

In last month’s TV interview, Olmert described presenting his offer to Palestinian President Mahmoud Abbas on Sept. 16, 2008. At the time, Olmert was enveloped in scandal and had already announced his intention to step down, but elections were still some five months away.

“I told him, ‘Remember my words, it will be 50 years before there will be another Israeli prime minister that will offer you what I am offering you now. Don’t miss this opportunity,'” Olmert said.

In the same documentary, Abbas confirmed Olmert’s offer. But he said the Israeli leader pressured him to sign the deal without allowing him to study a proposed map, and that the offer did not adequately resolve the fate of millions of Palestinian refugees.

Still, he described the talks as serious and estimated that a deal could have been wrapped up in “four to five months” had Olmert not been engulfed in his legal problems.

Olmert’s departure cleared the way for the election of Netanyahu, and subsequent Mideast peace efforts have failed to get off the ground. Netanyahu rejects Olmert’s territorial concessions, and with gaps so wide, the Palestinians say there is no point in resuming talks.

Despite his ambitious agenda, Olmert’s term was clouded by the kidnapping of an Israeli soldier who was captured by Gaza militants in a cross-border raid and an inconclusive war against Hezbollah terrorists in Lebanon. Both occurred in 2006 shortly after he took office. Olmert also reportedly destroyed a suspected Syrian nuclear reactor—and his government launched a military invasion of the Hamas-ruled Gaza Strip in late 2008 that drew heavy international criticism.

Olmert was convicted in March 2014 and sentenced to six years in a wide-ranging case that accused him of accepting bribes to promote a controversial real-estate project in Jerusalem. The charges pertained to a period when he was mayor of Jerusalem and the country’s trade minister, years before he became prime minister.

Olmert denied any wrongdoing and was allowed to stay out of prison pending the appeal.

In their 948-page ruling, five Supreme Court judges reversed Olmert’s previous conviction for accepting a 500,000 shekel ($130,000) bribe to help promote the project. The money was earmarked for Olmert’s debt-strapped younger brother, but four of the five justices ruled it could not be proved beyond a reasonable doubt that Olmert was involved.

The ruling essentially ends any hopes of a political comeback. Tuesday’s conviction included a ruling of “moral turpitude,” barring him from politics for an additional seven years after leaving prison.

Yohanan Plesner, a former legislator with Olmert’s Kadima Party, said Olmert’s legacy was ability to form a “relationship of trust” with the Palestinians at a time when the Israeli public, disillusioned by the second Palestinian uprising a few years earlier, was skeptical.

Plesner, who now heads the nonpartisan Israel Democracy Institute, said Olmert’s efforts ultimately were stymied by his legal troubles before they could bear fruit.

“There was still a lot of work to be done,” he said. “And since (the Palestinians) knew he was leaving, there was no incentive to deliver their compromises to Olmert at that point.”