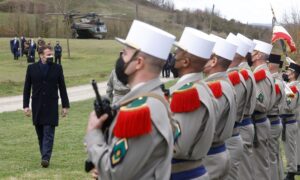 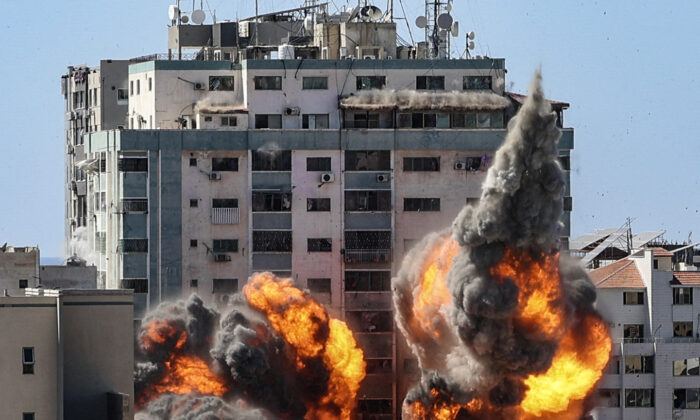 A ball of fire erupts from the Jala Tower as it is destroyed in an Israeli airstrike in Gaza City, controlled by the Palestinian Hamas terrorists, on May 15, 2020. (Mahmud Hams/AFP via Getty Images)
Viewpoints

Israelis Should Take the Lessons of War to Heart

So the Israelis have once again let themselves and much of the rest of the world down by calling a halt to their latest skirmish with the “Palestinians” of Hamas, to whom they unwisely transferred control of the Gaza Strip in 2005.

The recent round of rocket-launching and retaliatory air strikes accomplished nothing strategic, but merely kicked the can of resolution down the road yet again, in the vain hopes that the elusive “peace process” might someday resolve the conflict.

There’s only one resolution to this fight, however, and that’s total victory for one side or the other. And that’ll be the side that wants it more, and is willing to do whatever it takes to achieve that end.

Of course, this ruthless bellicosity offends the modern sensibility that victory is looked upon as rude and victimhood is prized as “moral authority.” American foreign-policy objectives, even prior to the end of the Cold War, have included a balance of power in which nobody loses, everybody wins, and all must have prizes.

Such a philosophy has kept the striped-pants set at the State Department in expense account travel and meals for 75 years, but it hasn’t done anything to sort out the underlying, intractable political and historical problems, nor has it contributed to the sum total of human happiness.

Diplomacy, it’s said, is war by other means. But unconditional-surrender makes diplomacy irrelevant, which is why diplomats are so dead set against solutions.

So let’s start with this proposition: What happened in Gaza was not “terrorism”—as far too many have been calling it—but war. War is an ugly word for an ugly thing, but one that’s dispositive in the course of human events. Generals as disparate as Napoleon and William T. Sherman instinctively understood—and said so—that the best war is violent, bloody, and as short as possible.

No lasting peace was ever won at the bargaining table; it was merely ratified after the war was over, as it was at the Congress of Vienna after the final defeat of Napoleon at Waterloo in 1815. The war between the Israelis and the Palestinians will be over when one side has either annihilated the other, or stripped it of its capacity to make war.

Too much of the commentary on the pro-Israel side has relied on the notion that the Jews have an inviolable, permanent claim to the Holy Land. They don’t. The ancient Hebrews took it in battle from the Canaanites, then lost it to a succession of conquerors, including the Greeks, Romans, Persians, Arabs, Turks, Egyptian Muslims, Byzantines, Frankish Christians, and the Ottoman Empire, just to name a few. In the matter of nation-states, possession is ten-tenths of the law, and no amount of Bible stories can change that.

Which is why Israel needs to defend and even expand its turf. Israel’s pre-1967 borders were essentially indefensible, but the fledgling nation held on to most of its gains during the Six-Day War, and added even more after the 1973 Yom Kippur War. By any historical standard, the Israelis have the right to hold on to conquered territory for as long as they can maintain it, and no appeals of “international law” can make them return it—except by force of arms.

Countries that contract, however, are on their way out. The Roman Empire started to shrink with Hadrian, who succeeded Trajan in 117 AD and promptly started pulling back from his predecessor’s expansion of Roman territory to its farthest limits. Three centuries later, Rome fell. In the east, the Byzantine Empire managed to hold on for another 1,000 years, gradually ceding territory to the Turks and others until its capital of Constantinople was finally captured by the sultan Mehmet II in 1453. Russia today is just a shell of the former Soviet Union.

In addition to military prowess, a key element in the survival of nations is birthrates, something that does not bode well for Western civilization at the moment. Were it not for the fecundity of its women, the Roman Republic might not have withstood three successive and devastating defeats by Hannibal during the Second Punic War. The Romans lost upward of 50,000 men on a single day at Cannae, but replacements were already in Roman wombs by the time the few survivors struggled home. Within less than a generation, Hannibal and his army were expelled from Italy.

Britain wasn’t so lucky; the British Empire, and with it, the Pax Britannica of the Victorian and Edwardian eras post-Napoleon, was fatally wounded during World War I, in which roughly 57,000 men were killed, wounded, or missing in action on the first day of the Battle of the Somme, which took place on July 1, 1916, alone. Britain’s best, brightest, and fittest from across the United Kingdom and elsewhere were the first to volunteer to fight for king and country, and those the Great War didn’t kill or incapacitate, suffered that fate in the Second World War.

Last year, the U.S. birth rate fell by 4 percent from 2019, to 55.8 births per 1,000 women. It’s been steadily declining for years, and not even immigration—legal or otherwise—can take up the slack. The American armed forces are already having a hard enough time finding physically able young people to fill its ranks and, with the increasing numbers of women joining up instead of having babies, are being forced to lower their physical standards overall.

This raises the question: Could the United States win a war with, say, China? The Chinese are having their own problems finding fit young men. Earlier this year, the government complained that its youth are “too effeminate” to fight, but China seems the likeliest opponent at this point should shooting start over Taiwan. And then what? Could the United States hang onto its possessions in the Pacific? Can the new “woke” Army and Navy even project overwhelming force anymore?

As I wrote in my current bestseller “Last Stands: Why Men Fight When All Is Lost,” war is the most elemental of human activities—indeed, mankind’s natural state. And no matter how sophisticated modern weaponry may get, unless and until a war is fought exclusively with nuclear weapons, the ancient masculine virtues of courage, duty, honor, and yes, ferocity are always going to come into play. Because when and if the apocalypse comes, what will be more prized than literal toxic masculinity?

Part of fighting is the resolve to get the war over with as quickly and definitively as possible. “If you make war, wage it with energy and severity,” said Napoleon to one of his generals in 1799. “It is the only means of making it shorter and consequently less deplorable for mankind.”

This is a lesson the Israelis should take to heart if their country is to survive. “Never again” is the national motto, and it’s time an increasingly anti-Semitic world remembered that. As for the Americans—tied down for 20 years in perhaps the stupidest war in its history in Afghanistan, a place of no strategic interest to the nation—it’s time for us to recall that weakness is not strength and that guilt about the past is not conducive to a bright future.

When you have difficulty defeating a rabble of goatherds for lack of willpower—and your last total victory came in 1945—it’s time to sack your officer corps, empty out the Pentagon, get women off the front lines, bring back the male-only draft, train warriors and not guidance counselors, and elect an administration that understands the nature—and, more importantly, the purpose—of warfare.