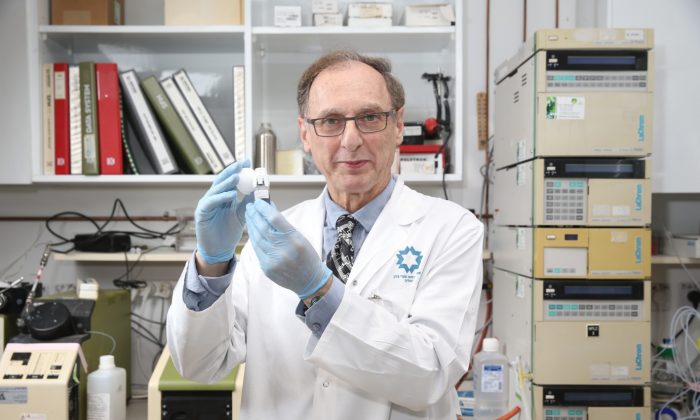 Dr. Alberto Gabizon (Shaare Tzedek Medical Center), whose research led directly to the advent of the drug Doxil, widely used throughout the world for ovarian and other cancers. (ICRF)
Opinion

In 1975 the nation of Israel, founded as a sovereign Jewish state in 1948, faced a crisis in its medical research programs that was indirectly the result of the three major wars it had fought over the previous 27 years. The crisis was not directly war-related, because Israel had mostly separated its medical research from its military programs. However, the cost of the three wars then already fought, and the cost of preparing militarily for the future wars that its neighbors threatened and later were to come, had created a severe government shortage for medical research.

By 1975 the crisis had in fact reached its boiling point. Frustrated by this deficiency of funding, Israeli oncologists, research physicians, and medical scientists in alarmingly increasing numbers were leaving hospitals and universities in the small Jewish state and relocating instead to well-funded research facilities in America, Canada, and Western Europe.

Recounting the problem that confronted Israel at the time, Eric Heffler, the national executive director of the Israel Cancer Research Fund (ICRF), which was founded, not coincidentally, in 1975, by a cadre of American and Canadian researchers, doctors, and philanthropists to provide funds for cancer research in Israel, explained when we met in his Manhattan office recently.

“Israel in the middle 1970s was suffering a scientific brain drain that if left unchecked would have made it very difficult to continue to do the work it had already begun to find treatments and cures for cancer, as well as for other deadly diseases,” Heffler said.

Heffler, 63, who has been in his current position since 2010, described how 40 years ago the founders of ICRF encouraged many of those in the cancer medical research community who had then recently left Israel to return, as well as persuaded those researchers who were thinking of leaving to remain.

“Their common reason for leaving the land they loved so deeply,” he elaborated, “was solely their desire to serve humanity through their life-saving research. When ICRF reached out to these scientists and doctors and promised that they would find ways to allow them to return home and conduct their research in Israel, many decided to come back. And, just as importantly, many of those who were considering leaving decided to remain because they believed that Israel would be the best place in the world to do cancer research.”

Today, 40 years later, due in large part to ICRF keeping the promises it made back in 1975, those optimistic beliefs, according to Heffler, might soon prove to be well-founded.

“ICRF just recently passed the fifty million dollar mark in total research funding transferred to Israel,” stated Heffler. “That money has been used to fund more than 2,000 separate cancer research projects, all of which, true to ICRF’s original mission, took place in Israel. These projects have led to the discovery of three major cancer-fighting drugs—Doxil, Velcade, and Gleevec, all FDA-approved.”

Concerning Gleevec, which has received a great deal of attention of late, Heffler said, “Some oncologists describe Gleevec as a ‘precision missile’ that kills actual cancer cells but, unlike conventional therapies which use a ‘shotgun approach,’ leaves healthy cells unharmed.”

Currently Gleevec is known to be used as a drug for only Chronic Myelogenous Leukemia ( CML). Heffler, however, explained that Gleevec, which oncologists in America, Canada, Western Europe, and Israel first began to use about 10 years ago, has the potential to transform what was a fatal disease into rather “a chronic manageable illness.”

Heffler proudly noted that ICRF has received significant support, in some instances, from a few of the same people it has most greatly benefited. One such person, Heffler mentioned, is a Canadian named Andy Faas.

“Andy was a middle-aged, extremely successful Canadian businessman, who in 2005 was diagnosed with CML,” Heffler related. “At that time, Andy later said, he felt he had received a death sentence. But his oncologist treated him with Gleevec, and he credits that with saving his life. By choice, Andy soon went into semi-retirement and became both a volunteer ICRF fundraiser and a donor. As a fundraiser, he has helped ICRF collect millions of dollars. As a donor, he has personally funded three ICRF Professorships.”

Heffler told me that he goes to his office every day with a strong sense of urgency, believing that his work on behalf of ICRF will lead to saving human lives. “The more money we raise,” he said, “the more cancer research we can fund in Israel, and the more people [who] will be saved. It’s just that simple.”

Robert Golomb is a nationally published columnist. Mail him at MrBob347@aol.com and follow him on Twitter @RobertGolomb.