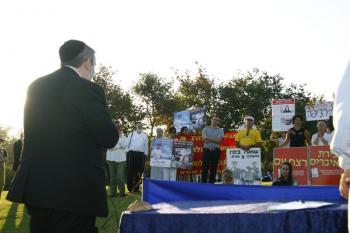 MP Rabbi Michael Melchior said that he will do anything to make the world notice what is going on in China. (Tikva Mahabad / Epoch Times)
Middle East

By Gidon Belmaker
biggersmaller
Print
ISRAEL—At a rally  in front of the Israeli parliament, the Knesset, in Jerusalem on Wednesday afternoon, twenty-two Israeli members of parliament called for an urgent discussion on the persecution of Falun Gong, the peaceful spiritual practice banned in China in 1999.

Roy Bar Ilan, spokesman for the Falun Gong Israeli Information Center, explained that during the past nine years the Chinese regime has been persecuting the practitioners of Falun Gong, using extremely cruel means.

“In fact, in China, about 100 million people are denied their fundamental rights because of their beliefs,” said Bar Ilan.

“The objective of the rally,” explained Bar Ilan, “is to support the government in taking a moral stance and addressing the facts. We should not allow a ‘business as usual’ approach with China to go on while ignoring the genocide taking place against Falun Gong practitioners.”

‘If We Don’t Raise Our Voices, Who Will?’

“I came here to raise my voice against organ trading,” said Father Abu Hatum Masud, a Greek Catholic priest from Nazareth, referring to the evidence of harvesting of vital organs from live Falun Gong practitioners taking place in China.

According to an investigative report conducted by two Canadian lawyers, Falun Gong practitioners are gathered in concentration camps and then taken to surgery for removal of their organs for on-demand transplants, without sufficient anesthesia. Most practitioners are killed during the process, or later when they are immediately thrown into a crematorium.

Abu Hatum Masud said that the Israeli Government should raise its voice against such atrocities.

“We still remember what happened in the 40’s. If we don’t raise our voices against such things, who will?” he said, also noting that the regime is also suppressing Catholics and Tibetans.

Men of Letters Are Free from Political Considerations

Chairman of the Hebrew Writers Association, Balfour Hakak, said: “I came here on behalf of the intellectuals in our country. As Jews we remember how the world kept silent while Jews were being murdered. Hitler interpreted this silence as an acceptance by the world of his wrong doings. Being the next generation of Holocaust victims, we should raise our voices against the Olympic Games in China.”

Hakak also said: “I came also to raise my voice against president Peres's upcoming visit to China. The president of Israel is a moral role model. When Peres shakes hands with the Chinese president Hu Jintao, he will actually convey the message that China is exempt from punishment.”

“Men of letters are usually free of political considerations. The people of the world tend not to act against China because China is an economic power. Men of letters do not have such considerations. The Jewish people should raise their voices for other nations too. Not only when Jews are offended should the Knesset hold a discussion,” said Hakak.

“Any human action is like a prayer,” said Menachem Fruman, rabbi of the settlement Tkoa, “sometimes it is accepted, and sometimes not. I came here to pray to God that the injustice done to [Falun Gong] practitioners in China, the Tibetans – the injustice of the strong abusing his power – will stop.”

Rabbi professor Haim Cohen from “Rabbis for Human Rights,” said: “Let us all pray as Falun Gong does, not only with our hands but with our actions as well. Let parliaments all over the world hold indoor discussions [about the Falun Gong], but also at parks, churches and synagogues.”

MP Rabbi Michael Melchior came during the rally to express his support. He said that he will do anything in his power to let the whole world notice what is going on in China, and that crimes cannot be hidden under the mask of a sports event.

Michael Melchior declared at the rally that he intends to present to the Israeli president, and chairman of the Knesset, the report by the Coalition to Investigate the Persecution of Falun Gong (CIPFG), which contains data on 1.2 million people from around the world who signed a petition for stopping the persecution in China, and information about the persecution.

In his speech at the rally, Melchior said, “Throughout history we wanted to bring the world’s attention to the situation of the Jewish people, and it was hard to raise the public awareness to something so distant from the eye, distant from the heart.”

“I have read quite a lot of material about Falun Gong, and I understand why the values of Falun Gong threaten the communist regime in China. There are really deep values of tolerance and the pursuit of truth, which can be really very threatening,” he added.

The husband of journalist Eleonora Shifrin was a Prisoner of Zion for many years in the former USSR. “Communism is bad,” Shifrin said in the rally, “It is bad for all mankind. People still don’t realize how bad it is. It is against humanity in its entirety.”

Shifrin explained that the Chinese regime is afraid of the strong faith of Falun Gong practitioners, because they cannot be intimidated.

‘In the Name of Humaneness’

”We stand here not as Falun Gong practitioners, but in the name of humaneness,” said Dr. Chen Yechezkeli, philosophy lecturer. He said that although people say that the Olympic Games should be separated from politics, in fact the Olympiad has a political meaning, and the purpose behind it is to unite people and cultivate the spirit of brotherhood among human beings.

“I call leaders of nations, if not to boycott the Olympics, to at least express their concerns and fears in regard to human rights in China and all over the world.”