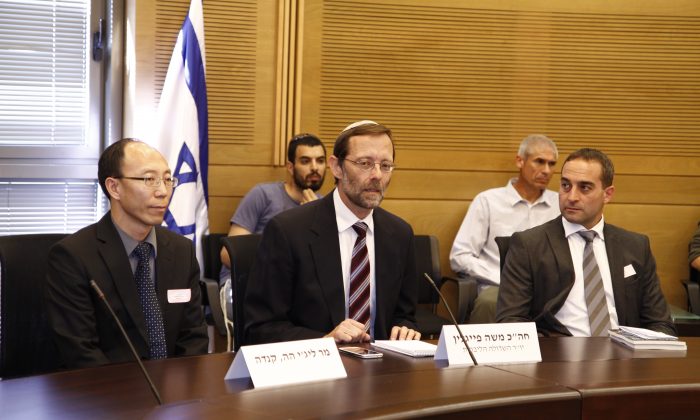 Israeli Politicians Call for End to Organ Harvesting in China

Members of the Israeli parliament, called the Knesset, on April 24 viewed a screening of Free China: The Courage to Believe, a documentary about two former prisoners of conscience in communist China who practice Falun Gong, and heard first-hand experiences of torture in China. Later, they called on the Chinese regime to stop harvesting organs from prisoners of conscience.

The film was shown at the first session of the Israeli Knesset Member’s Liberal Lobby, a coalition of members of the Knesset who discuss and attempt to influence policy together.

A Falun Gong practitioner, Lizhi He, joined the session to give his testimony on the severe torture he had suffered during nearly four years spent in Chinese forced labor camps and prisons.

“In the first seven months of my incarceration, they made me sit motionless every day on a hard board in my cell. Any movement I made led to a beating,” he recalled, adding that his skin slowly rotted and stuck to his clothes.

“That winter they stripped me naked and poured ice-cold water on me for long stretches of time. I had difficulty breathing, and difficulty staying alive.”

Moshe Feiglin, the head of the Liberal Lobby, noted that it is likely that only 9 members of the Knesset’s 120 attended the event because of the severe political pressure he says that members were under

“I would like to congratulate those members who have not allowed the waves of coercion and intimidation originating in China–used there on the people and now infiltrating also into the Israeli Knesset–to intimidate them. Many were simply afraid to show up,” Feiglin said.

“We, the participants in this convention, demand the Chinese government to cease organ harvesting, respect the image of God shared by us all, and cease all persecution and injury of people due to their beliefs.”

Roy Bar-Ilan, spokesman for the Israeli Falun Dafa Information Center, said there is no longer any doubt over the brutal persecution against Falun Gong, and the practice of forced organ harvesting in China. He mentioned various evidence, highlighting a report by human rights lawyer David Matas, an activist against anti-Semitism and Nazi criminals, and David Kilgour, a former Canadian cabinet minister and Crown prosecutor.

Various other parliaments have already called for an end to the practice of harvesting organs from Falun Gong, including the U.S. Congress, the European Parliament, and the Parliament of Australia.

Rabbi Uri Sharki said that it is unacceptable for Israel to lag behind other nations on the issue of values-based foreign policy. “The power of a country lies first and foremost in its morality,” he added. “If the government does not have a moral foundation, it can be strong temporarily, but eventually it will weaken, having lost its legitimacy.”

“Do not stand idly by when your neighbor’s life is threatened,” he said, quoting Leviticus. “We see here people tortured to death in such a horrible and brutal way–how can we not stand up, raise our voices, and prevent this?”

Nathan Sharansky, Chairman of the Jewish Agency, and once a prisoner of conscience in the former Soviet Union, told The Epoch Times afterwards that his release was eventually procured after people believed that human rights issues should be a part of foreign policy.

“It would be a mistake to stay silent, when it comes to issues like the horrific violation of prisoners’ rights in China, out of fear that it would affect the State of Israel’s position,” he said.

“It can only strengthen our country’s position and weaken our enemies, who are trying to use the banner of human rights against us, if we openly speak about our values, not only in Israel, but throughout the world.”