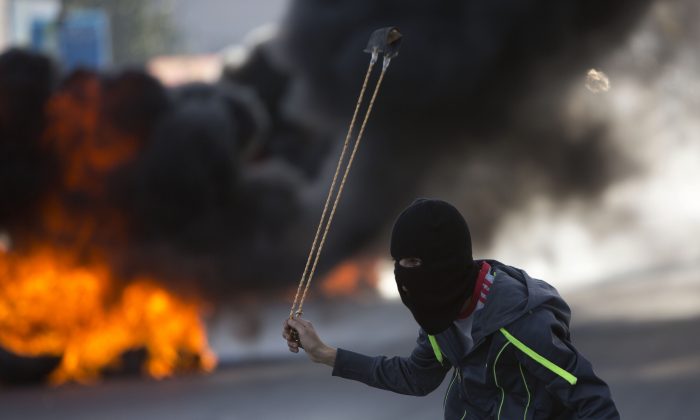 JERUSALEM—An assailant stabbed and wounded four Israelis, including a 13-year-old girl, in southern Israel on Saturday before fleeing the scene, setting off a large manhunt, police said.

Police spokeswoman Luba Samri said the stabbing attacks appeared to be ideologically driven, rather than criminal, and that police were sweeping the city of Kiryat Gat to try and apprehend the attacker.

The attack appeared to be part of a two-month spree of violence ignited by tensions surrounding a sensitive Jerusalem holy site. The unrest has spread across Israel, the West Bank and the Gaza border.

Since mid-September, Palestinian attacks have killed 17 Israelis, mostly in stabbings, while 84 Palestinians have been killed by Israeli fire. Of those, 52 are said by Israel to be attackers and the rest were killed in clashes with Israeli troops.

On Thursday, a pair of stabbing and shooting attacks carried out by Palestinians killed three Israelis, a Palestinian and an American teenager in one of the deadliest days of the recent outburst.

Israel says the current spate of violence is due to a Palestinian campaign of lies and incitement surrounding the sensitive holy site. The Palestinians counter by saying it is a result of frustration from nearly a half-century of occupation.

Much of the violence has emanated from Hebron, the largest West Bank city, where hundreds of Israeli settlers live in heavily-guarded enclaves surrounded by tens of thousands of Palestinians.

On Saturday, the Israeli military raided a Palestinian radio station in Hebron and confiscated equipment it said was being used to broadcast calls to attack Israelis. The military said it shut down the El-Khalil radio station overnight, marking the second time Israel has closed a Hebron station it accuses of inciting violence.

The military said El-Khalil had encouraged stabbings and glorified Palestinian attackers. It did not provide further examples of the incitement.

The station’s manager, Amjad Shawar, said more than 40 soldiers raided the station, seizing or destroying equipment. “They also took broadcast parts and gave us an order banning us from working for six months because they accuse us of incitement,” he said.

Dozens of people gathered outside later to support the radio station. The protesters held signs reading “the voice of Hebron shall never be silenced.”