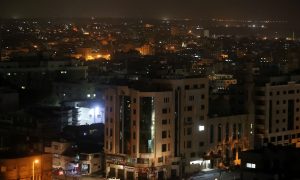 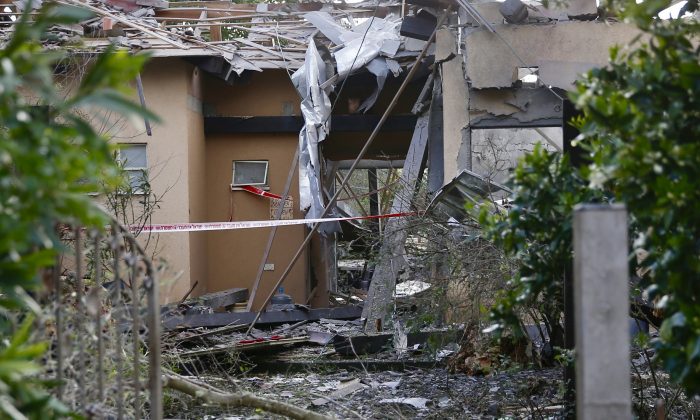 Damage to a house hit by a rocket is seen in Mishmeret, central Israel, on March 25, 2019. (Ariel Schalit/AP Photo)
Middle East

He said he will return to Israel to handle the crisis shortly after meeting with President Donald Trump on Monday, March 25.

The Magen David Adom rescue service said it was treating seven people, including two women who were moderately wounded. The others, including two children and an infant, had minor wounds.

The sounds of air raid sirens woke up the residents of the residential Sharon area, northeast of Tel Aviv, sending them scurrying to bomb shelters. A strong sound of an explosion followed.

The Israeli military said it identified a rocket fired from the Gaza Strip. Israeli police said the rocket hit a residential home in the community of Mishmeret, north of the city of Kfar Saba, setting off a fire and destroying the house.

The attack comes 10 days after rockets were fired toward Israel’s densely populated commercial capital of Tel Aviv. The Israeli military at the time struck back in Gaza and the sides appeared to be hurtling toward another confrontation. But Gaza’s Hamas leaders said the rocket had been fired accidentally and calm was quickly restored.

There was no immediate claim of responsibility to Monday’s attack but it would seem to be much harder to dismiss the latest incident as another misfire.

Gaza is controlled by Hamas, an extremist Islamic terrorist group that seeks Israel’s destruction and possesses a large arsenal of rockets and missiles capable of striking deep inside Israel. The territory is home to other extremist groups, including Islamic Jihad, an Iranian-backed armed organization that also has a formidable rocket arsenal.

Israel holds Hamas responsible for any fire that originates from the Gaza strip where it is in control.

Israel and Hamas are bitter enemies and have fought three wars since the terrorist group seized power in the strip in 2007. Smaller flare-ups have occurred sporadically since Israel and Hamas fought their last war in 2014.

The outburst comes at a sensitive time for both sides. Israel is holding national elections in 15 days. Prime Minister Benjamin Netanyahu is locked in a tight fight for re-election and could face heavy criticism from his opponents if he is seen as ineffective against the extremists.

Netanyahu is currently in Washington, set to meet later in the day with President Donald Trump.

His chief opponent, Benny Gantz, called on him to return home immediately to deal with the crisis.

“The reality in which Hamas turned Israel into a hostage is unprecedented and unfathomable,” he wrote on Twitter. “Netanyahu has to pack up now and return to Israel to handle this serious escalation.”

In Gaza, Hamas has come under rare public criticism for the harsh conditions in the territory. An Israel-Egyptian blockade, combined with sanctions by the rival Palestinian Authority and mismanagement by the Hamas government have fueled an economic crisis in the territory. Residents have little desire for another war with Israel.