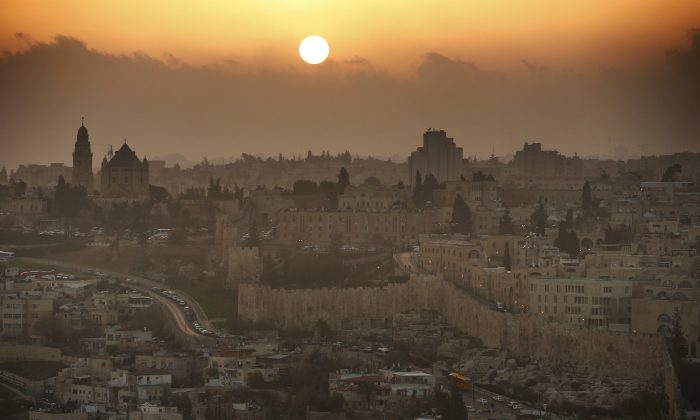 A partial view of the Old City of Jerusalem during sunset, on Feb. 22, 2014. (Thomas Coex/AFP/Getty Images)
Middle East

JERUSALEM—Israel’s Ministry of Defense said Wednesday that officials have approved the expropriation of some 370 acres (150 hectares) of land in the West Bank near the city of Jericho, in a move that drew sharp condemnation from the Obama Administration.

Israeli anti-settlement group Peace Now said it is Israel’s largest land expropriation in the West Bank since Israel declared nearly 1,000 acres (400 hectares) of the West Bank as state land in 2014 in a move that drew international criticism.

“The government’s decision is another step on the way to destroy the possibility for a two state solution,” Peace Now said in a statement.

Israel captured the West Bank from Jordan in the 1967 war. Palestinians demand the territory as part of their future state. Virtually the entire international community view Israeli settlements in the territory as illegal or illegitimate.

Israel says the fate of the settlements should be resolved in peace talks along with other core issues like security and borders.

In Washington, State Department spokesman Mark Toner condemned the move. “‘We strongly oppose any steps that could accelerate settlement expansion and we believe they’re fundamentally incompatible with a two-state solution and call into question frankly the Israeli government’s commitment to a two-state solution,” he said.

COGAT, an Israeli defense body, said Wednesday the land decision was made by senior Israeli leaders and is in the final stages of implementation.