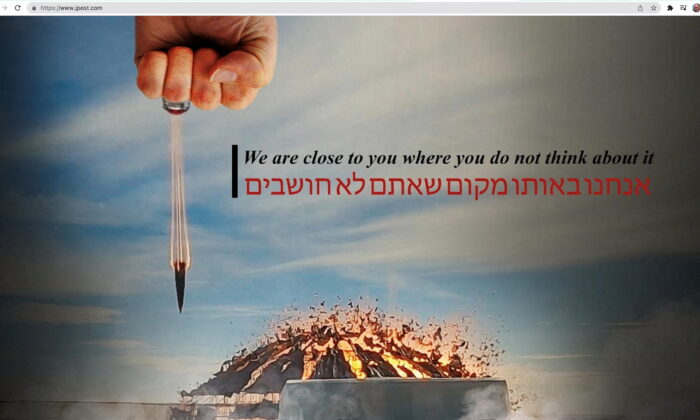 An Israeli newspaper, The Jerusalem Post, was hacked on Monday, the anniversary of the killing of top Iranian general, Qassem Soleimani, indicating it was the work of pro-regime forces who temporarily disfigured the website’s homepage and Twitter account.

The website featured a menacing message Monday morning saying, “We are close to you where you do not think about it,” in English and Hebrew, accompanied by an image of Israeli Dimona nuclear facility under a ballistic missile attack fired from a hand wearing a ring similar to that of Soleimani. When the general was blown to bits by a U.S. targeted attack, his remains were identified by the oversized red-stoned ring.

“We are aware of the apparent hacking of our website, alongside a direct threat of Israel. We are working to resolve the issue & thank readers for your patience and understanding. For now, you can continue reading us on our app,” wrote the media outlet on Twitter.

Details about the facility in Dimona, officially known as Shimon Peres Negev Nuclear Research Center, remain classified, and the airspace surrounding it is closed off while the area is heavily guarded and fenced. No group has claimed responsibility for the hacking.

Maariv, another Israeli newspaper with the same owner, was also briefly hacked along with its Twitter account, displaying the same message.

In May, it was revealed that Israel’s intelligence agency shared details of three cell phone numbers used by the Iranian general hours before the U.S. strike, ordered by President Donald Trump.

“General Soleimani was actively developing plans to attack American diplomats and service members in Iraq and throughout the region. General Soleimani and his Quds Force were responsible for the deaths of hundreds of American and coalition service members and the wounding of thousands more,” the Department of Defense said in a statement, describing the strikes as “decisive defensive action.”

Soleimani was considered the architect of the Iranian regime’s foreign influence activities, including those in Syria and behind the rocket attacks on Israel. The U.S. strike was in response to violent protests by Iranian militia groups outside the U.S. Embassy in Baghdad and a suspected Kata’ib Hezbollah missile attack that left one American dead at an Iraqi base.

Last month, the Iranian military held five days of military drills which the Revolutionary Guards completed by blowing up a replica of the Dimona facility. The country’s television networks carried images of the strike, which the hackers used to issue the threat.

In May 2020, The Jerusalem Post, along with other Israeli websites, was hacked with the image of Tel Aviv burning, accompanied by the message, “Be ready for a big surprise.”