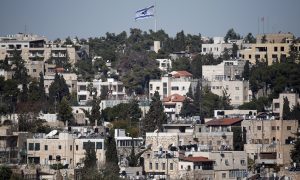 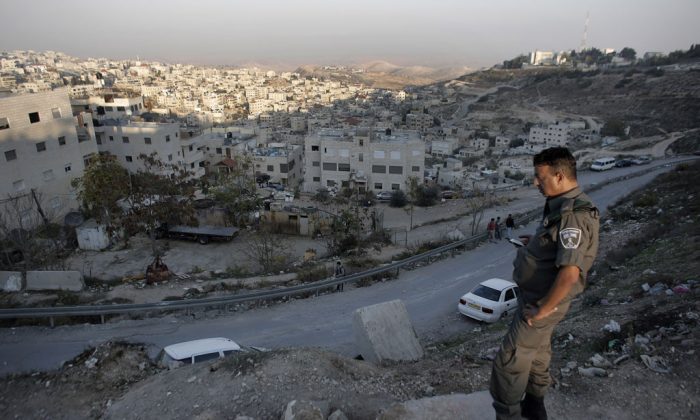 An Israeli policeman stands looking over the flashpoint Arab village of Issawiya (background) in East Jerusalem, during a protest against the new cement blockades at the entrances of the village on Nov. 12, 2014. (Ahmad Gharabli/AFP/Getty Images)
Middle East

JERUSALEM—Israeli authorities gave preliminary approval Wednesday to build 200 homes in a Jewish area of east Jerusalem, a move that threatened to push Israelis and Palestinians deeper into conflict after weeks of unrest over the city’s holiest sites.

The announcement came hours before U.S. Secretary of State John Kerry was scheduled to arrive in neighboring Jordan on a mission aimed in part at restoring calm. A State Department spokeswoman said Washington was “deeply concerned” by the decision.

Much of the recent violence has stemmed from tensions surrounding Jerusalem’s hilltop complex that is revered by Muslims and Jews. The collapse of U.S.-brokered peace talks, Israel’s war last summer in the Gaza Strip against the Islamic militant group Hamas, and continued Israeli settlement construction in east Jerusalem have added to the distrust.

Brachie Sprung, a spokeswoman in the mayor’s office, said city officials approved 200 homes in the Ramot area. Sprung said it was just a preliminary stage of the planning process — meaning construction would be years away.

She also said city officials approved an additional 174 homes for construction in an Arab neighborhood.

To Israelis, the announcement was relatively harmless. Ramot is a sprawling development already home to about 70,000 people, and most Israelis assume the area will remain part of Israel under any future peace agreement.

In the current tense climate, however, any Israeli construction for Jewish areas of east Jerusalem is potentially explosive.

Israel captured east Jerusalem in 1967 and annexed the area in a move that is not recognized internationally.

The Palestinians claim east Jerusalem as their capital. They consider all Israeli construction there to be illegal settlement activity — a position that is backed by the international community. About 200,000 Jewish Israelis live in developments like Ramot that ring east Jerusalem to help cement Israeli control.

The Israeli announcement came before Kerry’s scheduled meeting in Jordan with King Abdullah II and Palestinian President Mahmoud Abbas to discuss the situation in Jerusalem. There was no immediate plan for Kerry to travel to Israel.

“We are deeply concerned by this decision, particularly given the tense situation in Jerusalem, as well as the unequivocal and unanimous position of the United States and others in the international community opposing such construction in east Jerusalem,” State Department spokeswoman Jen Psaki said in Washington.

“These decisions to expand construction have the potential to exacerbate this difficult situation on the ground, and they will not contribute to efforts to reduce the tension,” she added.

Under a longstanding arrangement, Jordan holds custodial rights over Muslim holy sites in Jerusalem, including the compound known to Jews as the Temple Mount and to Muslims as the Noble Sanctuary. It is the third-holiest site in Islam and the most sacred place in Judaism. Jews are permitted to visit, but prayer by non-Muslims is banned.

Increased visits by Jewish worshippers to the site, which also includes the Al-Aqsa Mosque, have raised concerns among Muslims that Israel is secretly trying to take it over. The tensions have boiled over into violent demonstrations and deadly Palestinian attacks that have killed six people in recent weeks. The fatal shooting by police last weekend of an Israeli Arab protester in northern Israel as he appeared to be walking away from the officer has worsened the atmosphere.

Israeli Prime Minister Benjamin Netanyahu has insisted that Israel has no plans to change the arrangements at the holy site, but his pledges have done little to bring calm.

Abbas accused Netanyahu this week of leading the region into a “religious war.” Netanyahu responded by calling Abbas a liar and accusing him of incitement.

The harsh rhetoric reflects more than personal animosity between the two leaders. Both appear to be pandering to their political bases of support at a sensitive time.

Abbas, after nearly a decade in office and several failed rounds of peace talks, has little to show for his efforts. He also is facing a challenge from Hamas.

Fiery rhetoric is an easy way to appeal to his public at a time when many Palestinians believe Israel is not serious about negotiating a peace deal that would end a half-century of Israeli military occupation and establish an independent Palestinian state.

The official Palestinian media is filled with reports about Israeli hard-liners calling for legalized prayer on the Temple Mount and visits to the compound by Jewish worshippers, as well as denials of the Jewish connection to the site.

“Our correspondent reported that settlers invaded the mosque in small groups and toured the place with leaders explaining to them mythical accounts about the alleged Temple Mount,” the state-run Wafa news agency said Wednesday.

In the latest unrest, an attack Wednesday on a mosque in a West Bank village ignited a fire that destroyed its first floor. Residents blamed local Jewish settlers.

The U.S. condemned the West Bank mosque attack, Psaki said, adding: “We believe that such hateful and provocative actions against a place of worship are never justified.”

Netanyahu is shoring up his hard-line credentials at a time when his coalition is looking increasingly unstable and he faces a primary in his Likud Party next year.

Economics Minister Naftali Bennett, leader of the ultranationalist Jewish Home Party and perhaps Netanyahu’s most formidable rival, has accused the government of being too soft in its response to the unrest.

Housing Minister Uri Ariel, also of the Jewish home, has called for Jews to be allowed to pray inside the compound. An advocate of increased Jewish access to the site was shot and seriously wounded by a Palestinian gunman last month.

The tactics by Abbas and Netanyahu risk igniting further violence and have drawn calls for restraint.

Science Minister Yaacov Peri of the centrist Yesh Atid Party, and a former chief of the Shin Bet security agency, urged “all leaders to act responsibly by showing restraint and ending the incitement.”

“We must all work intensively and genuinely to calm the current situation,” he told foreign reporters.

Meanwhile, an Israeli border policeman was arrested in connection with the death of a Palestinian demonstrator near Ramallah in May, police said. Israeli security forces said they used only rubber bullets to disperse the protesters, but Israeli media reported the policeman may have used live ammunition.

Marwan Barghouti, a Palestinian leader serving a life sentence in Israel for his role in the Palestinian uprising last decade, was sentenced to a week in solitary for calling for more violence and for the Palestinian Authority to stop its security cooperation with Israel. Israeli media interpreted that as a call for a third intifada, or uprising.

Later Wednesday, Israel said it would not cooperate with a U.N. Human Rights Council investigation into the war with Hamas in Gaza this summer.

The Foreign Ministry cited what it called the Geneva-based council’s “obsessive hostility toward Israel.”

The decision means that the council’s representatives would not be able to enter Gaza from Israel. That would force them to enter through Egypt, but the crossing has been closed because of a perilous security situation in the Sinai Desert.

Israel has often accused the Geneva-based council of bias.

The Commission of Inquiry said in a statement that its three members are on their first visit to Jordan where they are meeting with individuals, groups, victims and witnesses of alleged human rights violations. The commission didn’t mention Israel’s announcement but said in a statement that the members hope to visit affected areas of Gaza and Israel and have “requested the cooperation of the government of Israel in this regard.”

From The Associated Press. AP writer Matthew Lee in Washington and Edith M. Lederer at the United Nations contributed to this report.