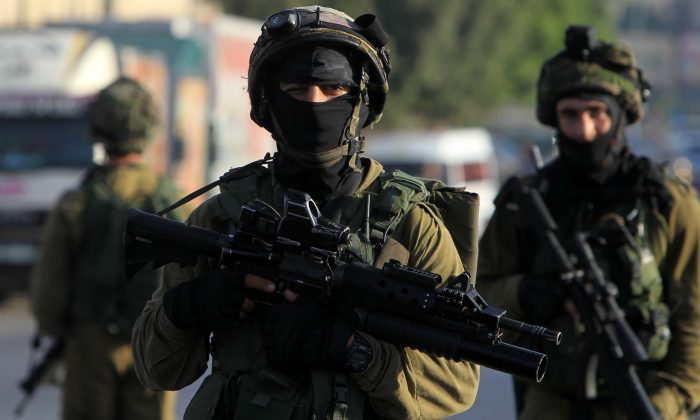 JERUSALEM—The Israeli military began deploying hundreds of troops in cities across the country on Wednesday to assist police forces in countering a wave of deadly Palestinian shooting and stabbing attacks that have created panic across the country.

The military’s planned deployment of six companies marks the first implementation of measures by Israel’s security Cabinet to counter the attacks that have intensified dramatically in recent days.

The Cabinet met late into the night and announced steps early Wednesday that included allowing police to seal off points of friction or incitement.

Many of the recent attackers have come from Arab areas of Jerusalem, prompting calls to seal off those neighborhoods to contain potential attackers. In a new step, Israeli forces placed makeshift checkpoints in Palestinian neighborhoods in Jerusalem to monitor traffic leaving the areas.

Israeli police said 300 soldiers had already been incorporated into their deployment in Israeli cities, while security in Jerusalem had previously been reinforced.

In recent weeks, eight Israelis have died in a string of stabbings, shootings, and the stoning of a car, while 31 Palestinians have been killed—14 of them identified by Israel as attackers, the rest killed in stone-throwing clashes with Israeli forces.

Israel’s internal security minister said on Wednesday that the bodies of dead Palestinian attackers would not be returned to their families for burial.

Gilad Erdan said the funeral processions of Palestinians who killed Israelis often turn into “an exhibition of support for terror and incitement to murder.” He said Israel should not allow them to “enjoy respect and ceremonies” after their deaths.

The funerals are a frequent flashpoint for clashes and often include calls for revenge. Erdan suggested that the attackers be buried without fanfare in distant cemeteries where previous Palestinian killers have been buried.

The comments come after a particularly bloody day Tuesday in which a pair of Palestinian stabbing and shooting attacks in Jerusalem killed three Israelis and another two attacks took place in the normally quiet Israeli city of Raanana. Three Palestinians, including two attackers, were also killed.

The government has been unable to stop the violence, carried out mostly by young Palestinians unaffiliated with known extremist groups and apparently acting on their own. The violence erupted a month ago over the Jewish New Year, fueled by rumors that Israel was plotting to take over Jerusalem’s most sensitive holy site, sacred to both Muslims and Jews. Israel has adamantly denied the allegations.

Israel says the violence has been fueled by what it says is rampant incitement against Jews and Israelis on social media spread by Islamic groups and the Palestinian leadership. In a briefing to foreign journalists Wednesday, Israeli Cabinet minister Yuval Steinitz said it had less to do with political differences and more with anti-Semitic incitement to create a religious war.

He showed Palestinian videos and animations that glorified the stabbings of Jews in the Old City of Jerusalem and the killing of a Jewish settler couple in the West Bank in front of their children.

This is not new. It is just a new wave of terrorism and violence, and this time it’s totally clear that the main approach here is a religious approach.
— Yuval Steinitz, Cabinet minister, Israel

He also quoted Palestinian President Mahmoud Abbas’s recent statement where he blessed “every drop of blood spilled for Allah” and that Jews desecrated a Jerusalem holy site with their “filthy feet.”

“This is not new. It is just a new wave of terrorism and violence, and this time it’s totally clear that the main approach here is a religious approach,” Steinitz said. “It’s all about horrible, anti-Jewish, racist incitement.”

Palestinians say the violence, coming at a time when prospects for gaining independence appear nil, is the result of years of occupation and failed peace efforts.

“Israel is an occupier in Jerusalem. It should end its occupation. This is the key to peace and stability,” said Saeb Erekat, a top Palestinian official.

“Decisions such as the ones adopted by the Israeli Cabinet pour gasoline on the fire,” he added. “Measures of collective punishment and killings and arrests and demolishing houses and confiscation of lands will only lead to the escalation of the situation.”

The Palestinian envoy to the United Nations, Riyad Mansour, said Israel was acting in a “savage” way, pointing to the mounting Palestinian death toll.

In a brief speech Wednesday, Abbas called for a peaceful “national struggle.” He also threatened to submit a case to the International Criminal Court against what he called Israel’s “extrajudicial killings” of Palestinians.

The clashes erupted last month when young Palestinians barricaded themselves inside the Al-Aqsa Mosque compound in Jerusalem’s Old City, hurling stones and firebombs at police.

The violence quickly spread across Israel and into the West Bank and Gaza Strip. Clashes continued Wednesday between Israeli troops and Palestinian protesters in the West Bank city of Bethlehem.

The Obama administration issued a strong condemnation of Palestinian incitement and assaults against Israelis. U.S. Secretary of State John Kerry said he planned to visit the region soon to try and encourage calm.