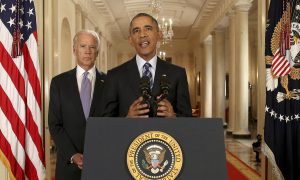 JERUSALEM—Israel’s prime minister condemned Tuesday’s international nuclear agreement with Iran as a “stunning historic mistake” and said his country is not bound by the deal, strongly hinting that military action remains an option.

Benjamin Netanyahu has been a leading opponent of the deal since its contours were announced earlier this year and conciliatory statements by both the United States and Iranian leaders did nothing to change his sentiment.

Speaking to reporters in Jerusalem, Netanyahu said the agreement would lift painful economic sanctions against Iran — bringing in a much needed influx of funds — without stopping it from developing a capacity to prevent nuclear weapons.

“This cash bonanza will fuel Iran’s terrorism worldwide, its aggression in region, and its efforts to destroy Israel, which are ongoing,” he said.

He said the deal does nothing to address Iran’s “aggressive” behavior in the region, which includes support for anti-Israel militant groups, such as the Palestinian Hamas and the Lebanese Hezbollah group, and frequent references to Israel’s destruction.

He noted that just last Friday, Iranian President Hassan Rouhani participated in a parade where American and Israeli flags were burned.

Netanyahu also said the deal “repeats the mistakes” of an earlier international agreement with North Korea, in which a system of inspections and verifications failed to prevent the country from developing a nuclear weapons capability.

When the deal expires in a decade, an “unreformed, unrepentant and far richer terrorist regime” in Tehran will have the capacity to build an entire nuclear arsenal, Netanyahu added.

“What a stunning historic mistake,” he said, stressing that Israel is not bound by the deal. “We will always defend ourselves,” he said.

Such sentiments were echoed across the political spectrum in Israel, where concern is high that the country’s archenemy has duped the world and will acquire nuclear weapons to use against Israel.

Netanyahu has been at the forefront of global opposition to the nuclear deal and has openly clashed with the Obama administration and other global powers that negotiated the deal, which lifts sanctions in return for greater restrictions on its nuclear program.

In the past, Israel has threatened to carry out a military strike against Iran’s nuclear installations. Despite Netanyahu’s latest comments, that option now appears remote.

Israel’s first course of action looks to be an intense lobbying effort in the U.S. Congress to oppose the deal. Netanyahu spoke against the emerging deal before a joint session of Congress in March. Yet despite strong opposition to the deal among Republicans in Congress, there is little that can be done now.

Although President Barack Obama doesn’t need Congressional approval for the deal, lawmakers will likely try to derail it by passing new sanctions or preventing Obama from lifting existing sanctions — the key incentive for Iran to comply with the deal. Under an agreement that Obama struck with lawmakers earlier in the year, Congress has 60 days to review the agreement before he can start easing sanctions.

Obama on Tuesday threatened to veto any resolutions from Congress seeking to undermine the deal, meaning opponents would have to muster a two-thirds majority in Congress to override the veto. That would require dozens of Democrats to vote against the president, which appears unlikely, and even if opponents are successful, Obama could use his presidential powers to offer substantial sanctions relief on his own.

The cascade of criticism crossed party lines, reflecting the widespread opposition to the deal in Israel.

“This is a regime based in deceit, and now they are going to do what they did for the last 20 years, which is trying to get themselves nuclear weapons behind the back of the world,” Yair Lapid, the head of the opposition Yesh Atid Party, told The Associated Press. “Now they are going to do it with the help of the international community.”

Netanyahu called on all sides to “put petty politics aside” and unite behind opposing Iran.