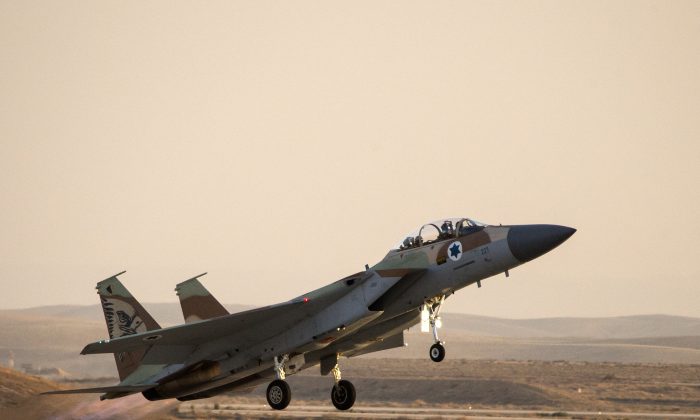 An Israeli F-15 I fighter jet takes off during an air show at the graduation ceremony of Israeli air force pilots at the Hatzerim base in the Negev desert, near the southern Israeli city of Beersheva on Dec. 26, 2013. (Jack Guez/AFP/Getty Images)
Middle East

Israeli Air Force jets conducted a “wide-scale attack” against the Hamas terrorist organization in the Gaza Strip, the country said.

The airstrikes were carried out after a “severe shooting attack” against Israeli Defense Forces (IDF) on Friday afternoon, the IDF said Friday.

“The IDF is currently conducting” the airstrikes “in various locations, said the IDF, adding that, its aircraft and tanks attacked military targets belonging to Hamas.

The IDF views today's attack and the hostile activity orchestrated by Hamas throughout the last months with great severity. Hamas chose to escalate the security situation and will bear the consequences for its actions

IAF jets recently conducted a wide-scale attack against Hamas military targets throughout the Gaza Strip following a severe shooting attack against IDF soldiers this afternoon. The IDF is currently conducting the attack in various locations

At around 1:45 p.m. ET, the IDF said it sounded sirens in the “Sha’ar HaNegev and Sdot Negev Regional Councils,” warning of a rocket attack.

Haaretz reported that the massive attack was carried out in Gaza after an exchange of fire between Israeli forces and Palestinians. A rocket alert was sounded throughout Gaza moments later. According to the Times of Israel, a Palestinian sniper shot at troops during a border riot, prompting the heavy response.

Four Palestinians died in the exchange. Hamas told Haaretz that they were members of the Izzedine al-Qassam Brigades.

During the airstrikes, there were clashes along the border fence. Palestinians launched mortar shells and threw explosive devices at IDF troops, the Times of Israel reported.

The United Nations Middle East envoy, Nickolay Mladenov, tweeted that both parties need to take a step back.

He wrote: “Everyone in #Gaza needs to step back from the brink. Not next week. Not tomorrow. Right NOW! Those who want to provoke #Palestinians and #Israelis into another war must not succeed.”