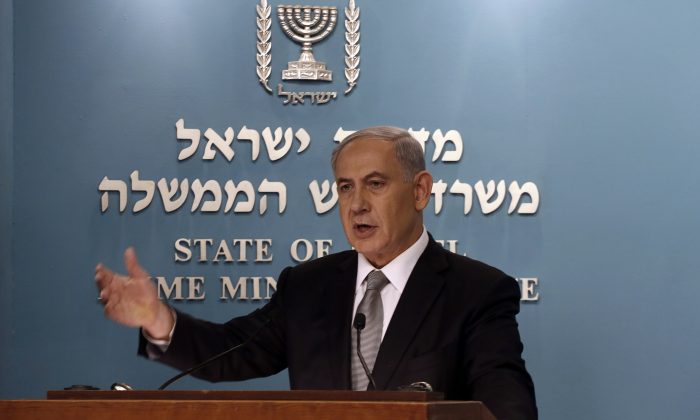 Netanyahu’s announcement plunges the country into a bitter campaign that seemed unlikely just a few days earlier. The election, expected to be held early next year, would come at a time of growing violence between Palestinians and Jews and deepening despair over the prospects for peace.

In a nationally televised address, Netanyahu said he had ordered the dismissals of Finance Minister Yair Lapid and Justice Minister Tzipi Livni. The pair, who head separate centrist parties, had emerged as his leading critics.

Netanyahu accused the two of trying to stage a “putsch,” saying he could “not tolerate opposition from within the government.” He said he would present legislation in parliament to dissolve the government and to hold elections “as soon as possible.”

The current government took office in early 2013 and has been riven by divisions from the beginning over the major issues facing the country.

The coalition includes Lapid’s centrist Yesh Atid, which rose to power with promises of economic relief for Israel’s middle class; Livni’s Hatnuah, which is focused on reaching peace with the Palestinians; Jewish Home, a hard-line party linked to the West Bank settler movement; and Yisrael Beitenu, a nationalist party that seeks to redraw Israel’s borders to rid the country of many Arab citizens. Netanyahu’s own Likud party is divided between more-centrist old timers and a young guard of hard-line ideologues.

The country experienced a brief period of unity over the summer as the military waged a 50-day war against Hamas militants in the Gaza Strip in response to weeks of heavy rocket fire. But the government otherwise squabbled over numerous issues, including the budget, the collapse of U.S.-brokered peace talks, Jewish settlement construction and how to confront a wave of Palestinian attacks in Jerusalem.

The differences escalated last week when Netanyahu pushed a piece of legislation defining Israel as “the Jewish state.” Although its 1948 Declaration of Independence already does this, Netanyahu says the country must enshrine this at the constitutional level to send a message to the country’s enemies.

Critics say the wording that Netanyahu favors would undermine Israel’s democratic character and harm the rights of its Arab citizens. Both Lapid and Livni condemned the legislation.

Peace talks with the Palestinians broke down last spring, beginning a chain of events that included the Gaza war, a recent spate of deadly Palestinians attacks, mostly in Jerusalem, and a deterioration in relations between Jews and Arab citizens of Israel. There are no signs that peace talks will resume soon.

In Brussels, U.S. Secretary of State John Kerry declined to comment on the “internal politics” of Israel. “But obviously, we hope that whatever government is formed — or whether there are elections, that those elections will produce — the possibility of a government that can negotiate and move toward resolving the differences between Israelis and Palestinians,” he said.

In the West Bank, Palestinian Foreign Minister Riad Malki said opinion polls indicate the next Israeli government may be “more right wing and extreme.” He said this could bolster international support for the Palestinian cause.

Netanyahu broke up his coalition a day after a late-night meeting with Lapid, meant to patch up their differences, ended in failure.

“We are sad to see that the prime minister has chosen to act without consideration for the national interest and to drag Israel to unnecessary elections,” Lapid said.

Livni said Netanyahu’s televised performance was undignified. “It was a small politician who spoke this evening and told tales unattached to reality,” told Israel’s Channel 10.

With several months of campaigning ahead, it is impossible to predict the outcome of the vote. But two Israeli TV stations reported Tuesday that opinion polls conducted on their behalf gave Netanyahu and his traditional hard-line and religious partners the early edge.