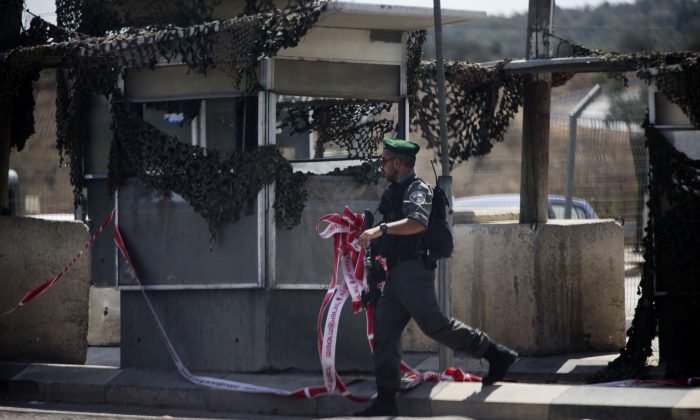 JERUSALEM—Israeli forces shot and killed a Palestinian after he stabbed an Israeli police officer at a West Bank checkpoint on Monday, the latest in a series of recent stabbing attacks that have escalated tensions in the region.

Israel’s Supreme Court, meanwhile, postponed for two days a ruling in the case of a Palestinian hunger-striking prisoner who slipped into unconsciousness last week, after his lawyer petitioned the court to free his client on health grounds.

In Monday’s attack, police spokeswoman Luba Samri said the Palestinian assailant approached the checkpoint, telling police officers there that he felt unwell. As he got closer, he pulled out a knife and stabbed one of the officers, slightly wounding him. Another officer then fatally shot the attacker, a man in his 20s, Samri said.

The attack was the third stabbing since Saturday, when two Palestinians were shot, one fatally, after they attacked security forces in two separate incidents in the West Bank. A Palestinian assailant was also shot dead in another West Bank stabbing earlier this month.

Tensions have been high since the July arson attack against a Palestinian West Bank home, when an 18-month-old toddler was burned to death. The child’s father later died from wounds he suffered in the attack while his mother and 4-year-old brother were seriously wounded.

Both Palestinians and Israelis have been closely watching the fate of a Palestinian prisoner, Mohammed Allan, who has been on a hunger strike for 63 days in protest of his detention without charge.

Israel’s Supreme Court on Monday postponed a decision on whether to free Allan, whose health has sharply deteriorated. His lawyer, Jamil al-Khatib, petitioned the court for his release.

Judge Elyakim Rubinstein said the court would come to a decision Wednesday, unless Allan’s health worsened further. Rubinstein urged the sides to reach a compromise on the matter, which has forced tensions to flare and sparked a debate in Israel over the ethics of the country’s new force-feeding law.

Israel told the court that it would be willing to free Allan if he agreed to leave the country and not return for four years. Allan’s lawyer rejected the offer.

Israel says Allan is being held for his activities with the Islamic Jihad, a Palestinian militant group that has carried out numerous violent attacks against civilians. Allan, who slipped into unconsciousness Friday, is being treated in an Israeli hospital. Since then, occasional scuffles have broken out between police and protests — both Allan opponents and supporters — outside the hospital.

Allan’s case may test a new Israeli law that allows a judge to sanction force-feeding or administration of medical treatment to prisoners on hunger strike, if there is a threat to the inmate’s life. But it’s still unclear if the contentious procedure will be carried out in Allan’s case.

Israel says the law is needed to deter Palestinian detainees from hunger strikes to pressure Israel for their release or other demands. Israel fears the death of a prisoner on a hunger strike could trigger Palestinian unrest amid the stalled peace negotiations. Critics of the new law say force-feeding amounts to torture.