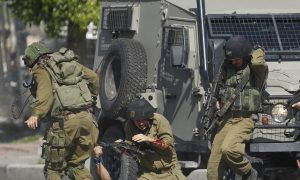 Palestinian With 'Press' Logo on Shirt Shot Dead in Stabbing
0 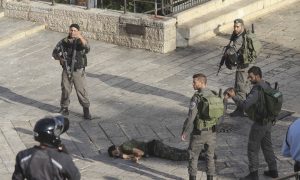 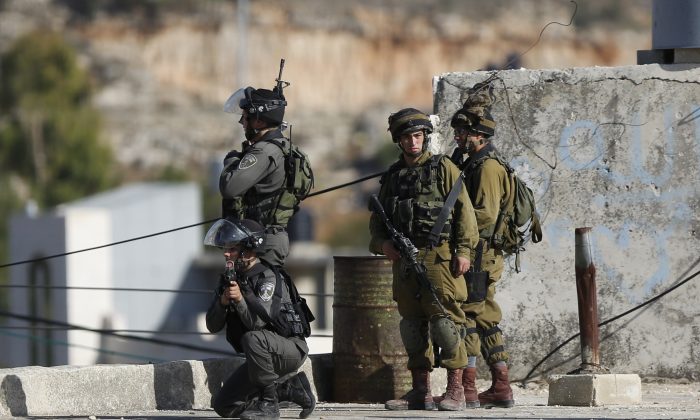 The attacks marked a return to violence in Jerusalem, which has enjoyed a brief lull amid a two-month wave of unrest engulfing the region. Jerusalem has been a frequent target of attackers, but had enjoyed period of relative quiet over the past two weeks as the unrest was focused primarily in the West Bank.

Most of the attackers have been young Palestinians in their late teens or early 20s. On Tuesday, a 13-year-old Palestinian boy went on trial before a Jerusalem court over a stabbing last month that fueled a high-profile media war.

The latest bloodshed was triggered by unrest at a major Jerusalem shrine revered by both Muslims and Jews, and quickly spread to Israel, the West Bank and the Gaza border. Israel accuses Palestinian political and religious leaders of inciting the violence. Palestinians say the unrest is the inevitable result of nearly 50 years of Israeli occupation and no hope for gaining independence.

In the first attack Tuesday, police said two Palestinian relatives, believed to be about 12 and 13 years old, stabbed a security guard on a train in east Jerusalem. The guard was moderately injured but managed to shoot the younger assailant. Passengers subdued the other, police said.

An amateur video that surfaced on a Palestinian website showed plainclothes Israeli security men wrestling a young boy, presumably one of the attackers, to the ground and taking off his clothes and shoes. The boy was stripped to his underwear as the security men shouted at him.

Shortly afterward, forces killed a 37-year-old Palestinian man outside the Old City as he allegedly chased guards while wielding a knife, police said.

Jerusalem had been relatively quiet for the past two weeks following an Israeli crackdown in response to a rash of stabbings, shootings and vehicular attacks. The army deployed hundreds of troops in the city and police erected checkpoints at the entrances to Palestinian neighborhoods. Israel has eased some restrictions in recent days, and it was unclear how the latest attacks would affect security measures in the capital.

Israeli police also said forces foiled an additional attack Tuesday afternoon in Abu Dis, just east of Jerusalem. Police spokeswoman Luba Samri said an attacker approached a nearby checkpoint and tried to stab forces before he was shot. There were no immediate details on the assailant’s condition.

Elsewhere in Jerusalem, 13-year-old Ahmed Manasra went on trial for his part in a stabbing incident that became a political lightning rod.

According to the indictment, Manasra and his cousin Hassan, 15, stabbed two Israelis in an east Jerusalem neighborhood in mid-October. Police fatally shot Hassan and a passing car ran over Manasra. The Israeli victims, aged 20 and 13, survived their wounds.

Palestinian President Mahmoud Abbas caused an uproar in Israel when he erroneously claimed in a televised speech that Israelis had “summarily executed” Manasra. The 13-year-old at the time was recovering at an Israeli hospital.

Israel promptly accused Abbas — as it has done repeatedly in the past months — of fomenting violence with what it says are incendiary comments.

For their part, Palestinians were enraged by video that surfaced on social media showing Manasra lying in the street, his head bloodied as bystanders curse him and shout “Die!” in Hebrew. The video made no mention of the preceding attack.

Israelis, meanwhile, were shocked by another security camera video that emerged appearing to show the two young cousins wielding knives and chasing a man, and later stabbing an Israeli boy as he got on his bicycle outside a shop after buying some candy.

Rights groups have alleged that Israeli troops have used excessive force against Palestinians, in some cases shooting and killing suspected attackers who the groups say could have been simply arrested.

In the video, police officers showed Manasra the security camera footage of the attack. One of the officers shouts at him, “Is this you, this person?” as the teen cries and says he doesn’t remember.

It was unclear how Palestinian media obtained the video or who filmed the Israeli investigation.

Attorney Lea Tsemel, who is representing Manasra, said she may contest the investigation based on the video. “You cannot terrify or threaten or tempt for the purpose of achieving a confession,” she said.

Samri, the police spokeswoman, said the investigation was conducted “with professionalism and without bias.”