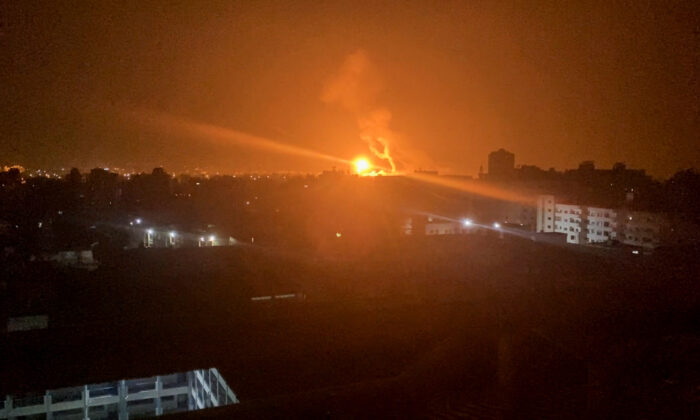 An Israeli air strike in Gaza City in a file photo taken in 2022. (Reuters TV via Reuters)
Middle East

The Israel Defense Forces announced Friday it carried out airstrikes in the Gaza Strip as part of an anti-terrorist operation, leaving several dead, including a leader of the Islamic Jihad group.

Taysir al-Jabari, who is in charge of Islamic Jihad’s military arm, died in the airstrikes in Gaza City, the group told several news outlets. Israeli officials also confirmed his death.

The health ministry in Gaza told Al Jazeera that 10 people died, including a 5-year-old girl. At least 55 people were injured. The Epoch Times could not immediately verify those claims.

An Israeli spokesperson told Reuters that the military believed it had killed around 15 terrorists but said it did not have the final total.

On Twitter, the Israel Defense Forces (IDF) wrote it is targeting terrorist organizations in Gaza with the latest strikes. At least six Islamic Jihad military posts were hit, the IDF added, saying that those groups were issuing “direct threats” against Israeli assets.

“We just targeted a senior commander of the Palestinian Islamic Jihad terrorist group in Gaza,” the IDF also wrote. “Tayseer Jabari was responsible for multiple terrorist attacks against Israeli civilians. The IDF will continue to defend Israel against the threat of terrorism.”

We just targeted a senior commander of the Palestinian Islamic Jihad terrorist group in Gaza. Tayseer Jabari was responsible for multiple terrorist attacks against Israeli civilians.

The IDF will continue to defend Israel against the threat of terrorism. pic.twitter.com/rhxuw2ZmYs

Israeli Prime Minister Yair Lapid said in a statement that Israel would not allow “terrorist organizations to set the agenda.”

“Let anyone who rises up to harm Israel know that we will get to them. Our security forces will act against Islamic Jihad terrorists to remove the threat from the citizens of Israel,” he said.

A top official in Islamic Jihad, a group that has been designated as a terrorist organization by the United States and European Union, vowed to retaliate.

“We will respond forcefully to this aggression, and there will be a fight in which our people will win,” Islamic Jihad’s secretary general, Ziyad al-Nakhala, said while visiting Iran on Friday, according to the BBC. He suggested that Tel Aviv will be targeted: “There are no red lines for this battle … Tel Aviv will be under the rockets of the resistance.”

Hamas, the group that controls Gaza, condemned Israel’s airstrikes, saying that Jerusalem “must pay the price and bear full responsibility for it.”

Islamic Jihad, one of a cluster of Palestinian terrorist groups, was founded in Gaza in the 1980s and opposes political dialogue with Israel. Considered close to Iran, it is separate from Hamas but generally cooperates closely with the organization.

Gaza, a narrow strip of land where some 2.3 million people live on a patch of 140 square miles, has been a constant point of conflict ever since Hamas took control. The area has since been under blockade, with both Israel and Egypt tightly restricting movement in and out.